- October 06, 2009
I've mentioned before, I'm not a doll fan. I really only liked baby dolls when I was a little girl, even. But, the other day I saw this one at a thrift store and I didn't think twice about snapping it up. 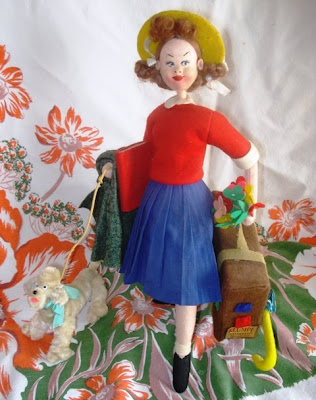 I love all the detail. 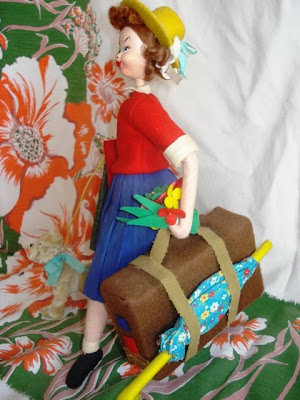 She's going on a trip: carrying a suitcase with her umbrella, and a bouquet of flowers for her hostess. 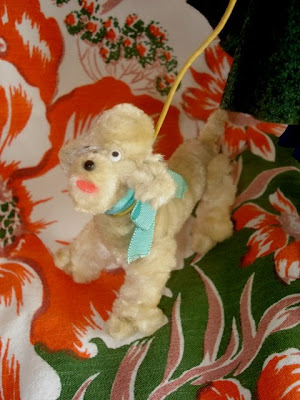 She's accompanied by her poodle. 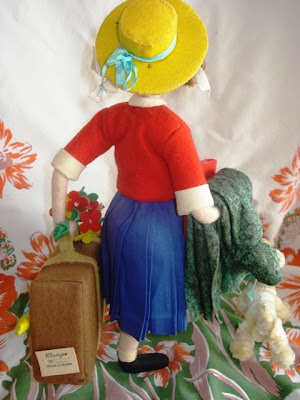 She's capable and sensible: she brought along her heavy coat in case of a sudden change in the weather and she wears a no-nonsense hat. If you peek under her skirt, she's wearing a slip and undies made of crisp linen!

This little doll stands about 10" tall and is in great pre-owned condition -- it has the tags intact: 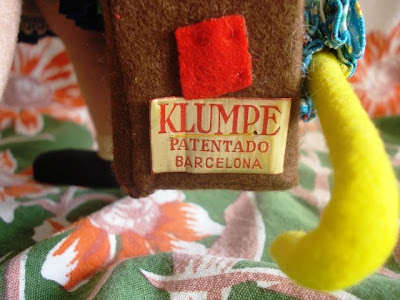 I've never heard of this company, have you?

I think the reason I was attracted to her is that she's so spunky looking, and then when I saw she was made in Spain she made me think of, like, a visiting aunt of mine from over there or something. (She does bear a slight resemblance to my Aunt Elena.)

Linda Sue said…
Klumpe dolls were common in the 50's. I have had several and each one tells a story- Your find is in especially good shape! She would fetch a nice sum if you ever decided to sell her. Great find!
October 6, 2009 at 3:19 PM

Sherri said…
Know nothing of the doll, but looks like Linda Sue did! How awesome a find is that?! And I like her spunky look too! She appears vintage to me. I love it.
October 6, 2009 at 5:56 PM

Christine said…
What fun! I can't believe all the detail. Such a pretty lady!