- October 03, 2009
October is Breast Cancer Awareness Month, and there's no better time to talk about the disease so as to do just that: raise awareness. At the risk of getting too personal, I wanted to share my own story:

In 2005 at the age of 41 I had abnormal mammogram results in one breast. The dr. told me that we'd wait a year and take another look.

So I asked for an ultrasound. The ultrasound results were abnormal, too. At this point, I was referred to a breast cancer surgeon. She told me that many things could cause an abnormality, and she didn't think it looked like cancer. She offered to do a biopsy, but she and the mammogram technician both said they personally wouldn't because it probably was nothing. They recommended waiting another year to see what the next mammogram looked like.

At the time, I worked with two ladies that I knew had breast cancer, so I asked to speak with both of them about their experience. They both said, Get the biopsy. One of them told me that she had been told the very same thing: wait a year. The following year at her exam, she had full blown breast cancer and needed a masectomy, chemotherapy, and radiation.

So, I went back to the surgeon and asked for the biopsy, which I had the week of Thanksgiving in 2006. It was an incredibly invasive procedure.

(Please skip this part if it's too much information for you.) At a surgery center, I was given a mammogram on the affected breast. The dr. found the area in question on the mammogram screen and marked the spot; then, they numbed the area and inserted a sharp tube which was approximately the diameter of a ball point pen shaft into my breast. Then, into that shaft, a long steel pin; then, the tube was removed while the pin stayed in place.

They made me sit down in a wheelchair. The pin was so long that if I wasn't careful, it poked me in the neck and chin; to keep this from happening, the nurse stuck a stryrofoam coffee cup to the sharp end of it. They wheeled me back to my waiting cot and I hung around, skewered, until it was time for the biopsy.

After that, mercifully, I was put under so that I awoke only later when it was all finished. They sent me home with instructions to keep my wound dry and promised results in about a week. The first time I saw my biopsy scar, I was in shock. It is literally 2.5" long and, would you believe, still hurts sometimes to this day, almost 3 years later.

The results of the biopsy: several instances of atypical hyperplasia. This means they found abnormal cell growth that might become cancerous. It's not breast cancer, but the presence of these cells increases my breast cancer risk manyfold. Estimates vary, but the dr. told me that she felt it increased my cancer risk by at least 30%. I've done some reading on my own, and based on my age and all, I think the statistical risk is actually greater.

I was sent to an oncologist, who I continue to see every six months for follow-up mammograms, and who prescribed a 5 year regimen of a cancer drug called Tamoxifen. If successful, at the end of five years my breast cancer risk should be back to "normal."

I started taking Tamoxifen in the beginning of 2007. It's an ugly little drug. It's basically an anti-estrogen, blocking all of the hormone which can feed the abnormal cell growth. The drug itself is not without its risks, but being post-hysterectomy since the age of 37 I was actually a good candidate for taking the drug safely. The worst side effect I've experieced is the hot flashes, but after almost 3 years, I'm quite used to it.

What I may never get used to, though, is the nervous little tingle in my stomach each time my breast aches and I wonder, what if?

The last time I saw my "regular" doctor (not the surgeon, not the oncologist), she said, "This cancer is killing us." It was chilling. I'm sure you've heard that a family history of breast cancer is no longer the big risk factor. Statistically, we are ALL at risk.

I created a work of art to symbolize my battle with the atypical cells. 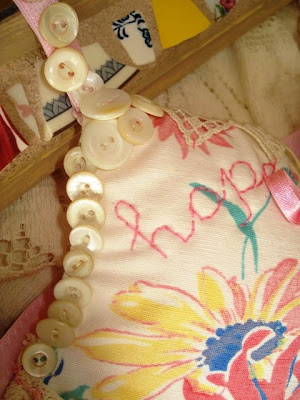 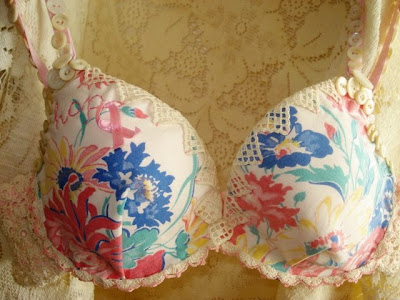 I call it, "Antique Hope Chest." 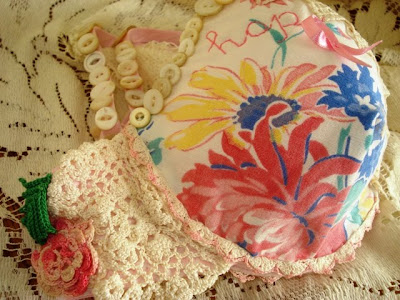 I covered a beautiful new pink brassiere with antique crochet lace and trim. Each cup is a piece cut from an antique tablecloth, in lovely florals. 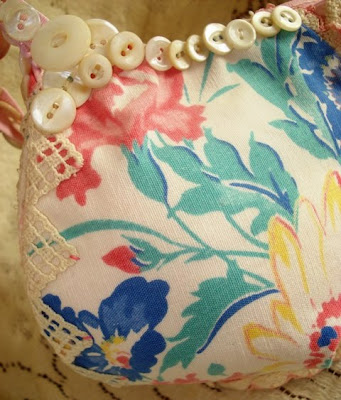 The straps are fully stitched with antique mother of pearl buttons. 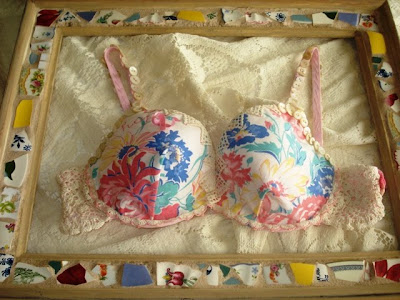 There's a lot of great stuff on Etsy as others commemorate the month of October and the cancer that threatens us all -- go see!
antique breast cancer awareness buttons Etsy handmade

Coralie Cederna Johnson said…
So glad you are promoting Breast Cancer awareness! And that gorgeous bra is a wonderful! I love the fabric you used and the whole thing is just a beautiful artistic creation! Awesome!
October 4, 2009 at 11:15 AM

Sherri said…
Your Hope Chest is BEAUTIFUL! Your story touching. What a wonderful thing you are doing in promoting awareness, making a treasure from your heart and donating the 'profit' to help others.
Great post and reminder to us all.
October 4, 2009 at 12:12 PM

Linda Sue said…
Your story is most compelling Laurie, frightening, as well,love your hope chest!
October 4, 2009 at 1:46 PM

Micki said…
I am so sorry that you went through all of that, and I hope that the medicine will help you. It must have been so frigtneing for you.
Good luck!
Micki
October 4, 2009 at 4:13 PM

maryboys said…
good for you for being assertive and insisting on further work-up, laurie. i literally always encourage every patient under my care, who has an abnormal mammo, to go further! always. thanks for sharing your story.
October 4, 2009 at 8:55 PM

Christine said…
I hope all goes well. My mother had breast cancer over five years ago and is now cancer free. Good for you that you took your health in your own hands and had the doctors give you the best care.

Sandra said…
Laurie,I am so proud of you for taking care of you!! That you made sure that you found the answers you needed, and challenged the Drs to give you the best treatment possible. I am sure is was very scary and painful, but it could have been a lot worse. I will keep you in my prayers, that the Tamoxifen keeps you cancer free. And bless you for creating the beautiful "hope chest" and donating the proceeds for the cure. You are an angel.
October 5, 2009 at 1:12 AM

said…
Laurie, brava for telling your story. And what a gorgeous piece of artwork that you were inspired to create.

Lydia said…
Thank you for sharing such a personal story. If you ever want to go drug free, and have a good chance of combatting your odds, please check out the Protocel that my hubby takes.

If you get 2 bottles, the price is decreased. And the Formula 23 (for the breast cancer I believe) cost less than the one that Ken takes. The bottle will last for 2 1/2 months.

If I encountered what you encountered, knowing what I know about alternative treatments and homeopathy ,(studying for over 20 years now), I would opt for the Protocel instead of the medicine at this time.

Either way, I am so glad that you took charge . I am sure that you will remove those odds:)

Angela said…
Thank you for sharing your story with us, Laurie!
And your Hope Chest creation is so clever! Good idea for donating the proceeds to the cause!
October 5, 2009 at 4:19 PM

Charlene said…
What a beautiful piece! I went through a scare myself a few years ago, and while the biopsy thankfully came back negative, the whole process struck fear into my heart and mind. Thanks for sharing your story.
October 9, 2009 at 7:25 PM