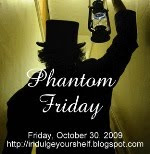 As promised, I wanted to share my spooky ghost story with you on Phantom Friday.

It was late at night on a Fall evening in San Francisco, CA, about 25 years ago. I was visiting a friend who rented a room in an old neighborhood near Silver Avenue. I visited often, and had heard stories of strange happenings in the house. It seems there had been a suicide there, and previous renters reported drastic temperature changes and other abnormalities such as "a presence" in the ensuing years. But I wasn't afraid to visit, and had never noticed anything out of the ordinary. Until that night.

My friend and I were standing on opposite ends of the room, not looking at each other, but facing one another, when I heard a strange, long, loud whistle directly in my ear. The thing is, I not only heard the whistle, but I felt it as well -- I felt the air of the whistle on my skin.

I looked at my friend, but before I could react he said, "Did you just whistle?" I shook my head, "No." I didn't need to ask him if he had whistled, because I knew it couldn't have been him. He was standing on the other side of the room, and I had felt the whistler loud and clear right next to my ear. My friend then told me he'd heard the whistle loud and right next to his ear, too.

I felt very unsettled and I was in a big hurry to leave the room and the house. A few minutes later, we got into his car and my friend drove me home. We talked about the whistle a bit, and my friend was as disturbed as I was. Then, out of nowhere, we heard not just a short whistle, but several bars of a whistled song coming from the vicinity of the car's radio. My friend fiddled with the knobs, but he knew as well as I did that the radio wasn't on. We sat and listened to that strange, lone whistle, and then it stopped.

When we'd heard the whistler in his room, it was very frightening. But, the longer whistling in the car seemed ever more creepy. I really had the sense that the whistler was somehow teasing us -- not in a playful way, but in a mean way, as teasing can sometimes be.

I've told very few people that story. I am completely convinced the whistles were ghostly communications from beyond.

For more spooky stories, please visit these friends who are playing along today:
Melinda
Missie
Have a spooky Halloween!
home

Melissa said…
Freaky story! I went on a ghost tour a few years ago in downtown Raleigh. They took us to the state capital building and played several recordings of noises that they had taped throughout the building. Hearing those noises were a lot scarier than anything I'd ever experienced.

Melissa said…
YIKES! I've never had an encounter like that, but both of my parents had "experiences" with "people" in the house we lived in when I was a child. My mom mostly saw a man and a woman (she said she often sensed that the woman was working in the kitchen along side of her), and my dad once saw a small boy standing at the foot of his bed, and it wasn't my brother! Years after we moved, there was a story in the local paper about a number of ghost sightings in that neighborhood.

It gives me the willies just thinking about it!

On to happier news: you won the first week of my letterpress giveaway. Congratulations! I sent you an email to fill you in on the details.
October 30, 2009 at 6:46 PM

Devonay said…
I had an extremely disturbing whistle experience as well. This happened when I was 17. It was years before I told anyone. I've never been so scared. Normally things of the paranormal nature do not scare me, but as with you, the mean teasing factor was there. That's what realllly scared me. To this day, I am petrified if I hear random whistling.
October 31, 2009 at 6:05 PM

Susan @ Blackberry Creek said…
Now that was a scary story--not like your ghostly kitty and puppy dog stories.
April 15, 2010 at 2:57 PM

Marty said…
Wow! That's incredible. It's funny how you say you could tell the whistle was teasing in a mean way! I don't doubt that. My best friend also had some experiences like that before, and she said the same thing. Scary! Loved reading about it! :)
October 31, 2011 at 1:36 PM