It's Almost Time for NaNoWriMo

November is National Novel Writing Month, and this year I'm going to participate again!
My first NaNoWriMo (correctly pronounced "Nah-No-Wr-Eye-Mow") was in 2002, the year we moved to Colorado. Hanging out on the website's bay area/CA forums really helped with the homesickness, as did the fact that NaNoWriMo was a bay area creation! It was fun; I sat at the computer watching the snow fall that month, and finished my novel early, in 19 days.

Since then, I've participated four more times, and finished two more times. By "finished," I mean I completed a 50,000 word novel within the 30 days of November -- every participant's goal!

If you've never looked around the NaNoWriMo website, you should check it out. For one thing, you should read anything written by the founder, Chris Baty. He's very tongue-in-cheek funny, and it's totally worth participating just to get his pep talk emails all month! There's tons of other cool stuff there, such as a list of people whose NaNovels (as they're called) were eventually published (and you'll notice that I'm not on that list.)

The most fun, though, is the area of the website called the Forums, the bulletin boards which are always hopping with people who are looking for ideas, encouragement, or friendship.

In earlier years, I was a Municipal Liaison, which meant that I organized get-togethers (and parties!) and acted as a point person for our local group, which I started in 2003. We had much fun at our once a week "write-ins", where we challenged each other to write the most in five minutes (using a kitchen timer); but we had just as much fun the nights none of us wrote. Sometimes just talking out loud about a place in your writing that you were stuck helped you move beyond that point, and other times we were able to play "plot doctor" for each other and make concrete suggestions that made a real difference.

Sometimes, of course, it was just an excuse to get together and have a good cup of coffee. But there was nothing like it, and I'll always be inspired by the people I've met through NaNoWriMo each year, who were doing something crazy in pursuit of a dream. And, I know we, in turn, inspired others, who maybe didn't write but caught the fever to be creative. 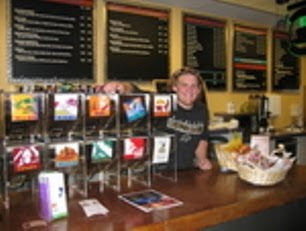 Another day I'll tell you the story of our barista during our group's inaugural year
For the last two years, my son has done the Young Writers Program version of NaNoWriMo: he sets a goal for his word count, and writes a complete story to meet that goal. Last year, he even did book cover art for his story! (All of this while his mom was too busy with school to write along.) This November, though, we're doing it together! We even did a worksheet together this summer on how to develop characters, so he's been thinking of his story idea!

I, however, have not.

But, that's never stopped me before! It goes along with NaNoWriMo's old slogan: "No Plot? No Problem!"

Can you tell I'm excited? I encourage anyone who writes, has always wanted to write, or who just wants to know what it's like to jump on the NaNoWriMo band wagon! It's free, it's fun, and you never know what will come of it!
friends nanowrimo writing

Lydia said…
Way cool! OUr little town library is starting a writing group next Thurs.. Hope my daughter goes. I may have to skip the first one while I am getting ready at nights for the Big Show next weekend.
October 16, 2009 at 11:13 PM

karlascottage.typepad.com said…
Impressive! I thought you were making a joke on your comment, but wow, a real novel in one month!!??
October 18, 2009 at 8:29 PM