Grumpy on a Gray Friday, and Some Thrifty Finds

- May 14, 2010
Oh my gosh, I am so down in the dumps! We've had gray skies for a few days now, and it's damp and chilly, too.  This weather makes me very grumpy.  Instead of enjoying the outdoor plant show that comes just once a year, I stayed home this morning.  It was drizzly, and I wouldn't be able to put any plants out anyway because we're still having frosts and overnight freezes!  I spent some time, instead, researching this tea cup I found at Goodwill the other day: 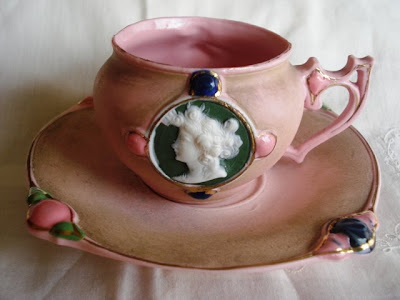 It's interesting in that it has the "feel" of Jasperware - you know, rough.  But it's quite ornamental, too, with glazed "jewels" around the inserted cameos, and on the saucer.  I had a feeling it was something special. 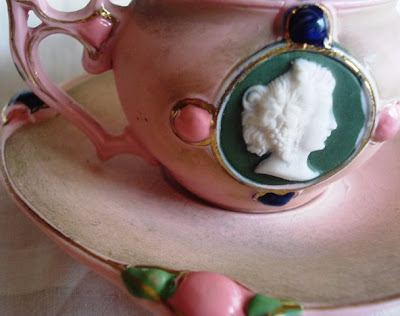 There's a different cameo on each side of the cup.  And, interestingly, only the ornaments, the rim, the handle, and the inside of the cup have a shiny glaze. 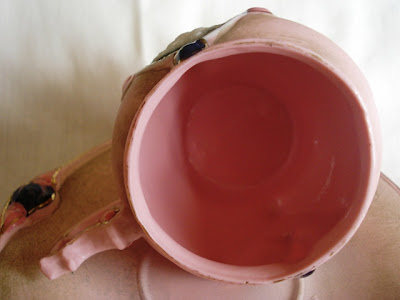 I able to glean that it was made by Schafer & Vater in Germany, (1890-1962), whose wares began to be imported to the US by Sears in 1910.  Not all of their items were marked, but those that were match the mark on these pieces -- a crown design.  The factory closed in 1962 and was taken over by the East German government; subsequently, all molds and records were destroyed.

Similar pieces are selling $22 (for just the cup, without saucer) all the way up to $180 online; mine is in perfect vintage condition so I'm going to sell it on Etsy for probably around $30.

Okay, here are a few more pretty things to show you: 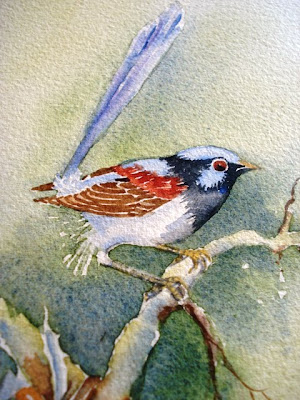 Isn't this little bird sweet?  I found this watercolor at a thrift store -- it was priced pretty low and the man who got it out for me told me it was a print.  I begged to differ.  When I got home and took it out of its frame... 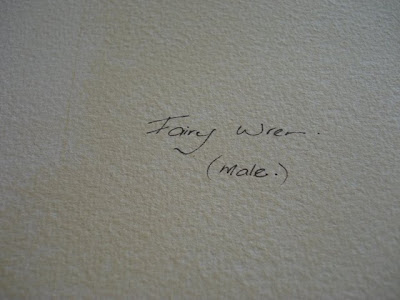 I could clearly see it was original, and not only that -- it's identified as a male fairy wren.  It was painted in 1996 but, unfortunately, I could find no information on the artist, B. Ketteridge.  I did find there's a well know watercolor artist named Elizabeth Ketteridge, but the signature clearly shows a "B", not an "E". 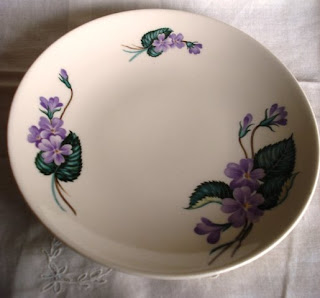 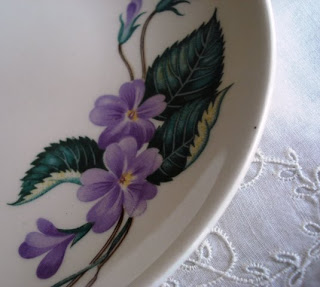 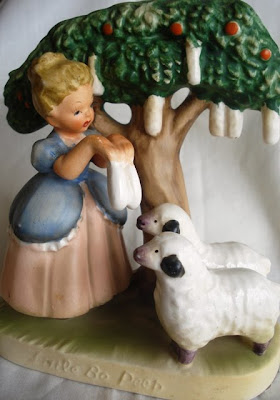 This is another one of those pieces that I passed up until the price was down to 75% off.  Then, after I bought it I noticed it was signed by the Japanese artist, so it is a bit better than I thought it was. 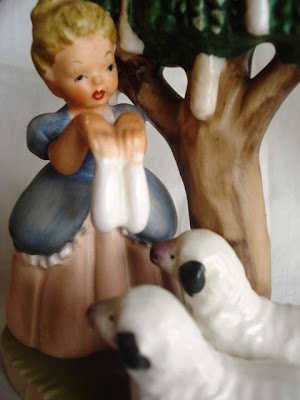 I can't for the life of me figure out what Little Bo Peep is feeding her sheep! 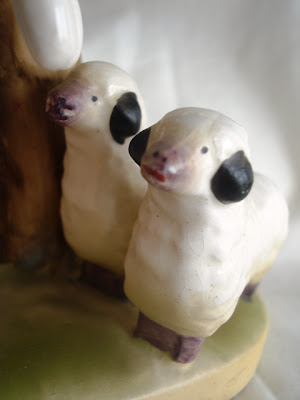 Oh well; they look happy enough to be getting it!
Etsy thrift store finds

sassypackrat said…
So many great finds! I thought Bo Peep was pulling socks off the tree or white eggplants. I know neither grows on trees so it's an very odd and unusual piece. Hope the days get less gloomy for you!
May 14, 2010 at 6:01 PM

Sandra said…
Oh Laurie, I know what you mean, by the long gray gloomy days. Here in Seattle, we can have them for weeks on end, and it can really get one down and feeling grumpy. I hope your day got better. Love all the little treasures you found, the cup and saucer were so unique.
May 15, 2010 at 2:17 AM

Linda Sue said…
Well, Miss Colorado Sunshine, you would never live through a year in the Pacific Northwest!
You certainly scored mightily at the charity shops! LOVE the cup and saucer and bo peep looks like she may have neutered the daddy sheep and is showing the youngins what happens if they go ramming about.
May 15, 2010 at 10:39 AM