- September 13, 2009
Yesterday, my friend and neighbor Phyllis and I took a day away from our families to celebrate our birthdays, which are coming up next weekend. She and I were born one year and one day apart (I'm the younger, ahem.)

We both love antiques and decorating, with very similar tastes, so our day out typically involves going antiquing! This time we went to Denver, and every place we went was completely new to me, which made it exciting.

We started off at The Ballpark Market which was an outdoor flea market kind of place. Would you believe I only spent 25 cents there? ( On a button, of course!)

I wanted a lovely sewing box; it was one of those standing wooden ones, with the accordion-style foldout trays, but unique in that it had a sort of curved shelf below which would have been great for catching yarn. She wouldn't go down even a little in the price, which was annoying since she'd said "all prices are negotiable", and so I decided it wasn't meant to be -- and since it was our first stop, I thought I'd wait and see what else we found.

Next, we headed to Antique Row, where neither of us had been. The antique shops were nice, but pricey -- even though, as you can see by the photo, it's not exactly a "nice" part of town! 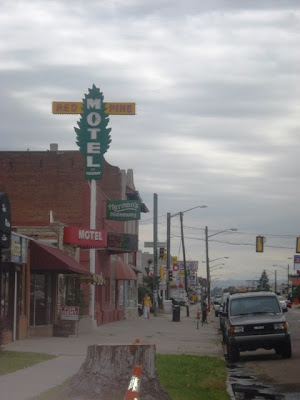 We arrived before 10 a.m., which is when all the shops open, so we spent some time in thrift stores that had opened earlier. (I bought a Frankoma cornucopia vase that I can't show you a photo of, because as soon as I got home I dropped it and it's now in the trash in 10 pieces. It was a bummer, but only a $2 loss.)

We had the most fun of all in a store called Shirley's Chapeaus & Vintage Boutique. It is located in the basement of another store, Trunk Full of Treasures, and I've never seen anything like it! Crammed to the rafters with hat racks and shelves just spilling over with vintage and antique hats! We played and laughed and oohed and aahed in there forever!

Phyllis hasn't given me the photos she took of me, so I can only show you hers and hope she doesn't kill me! (Wink!) 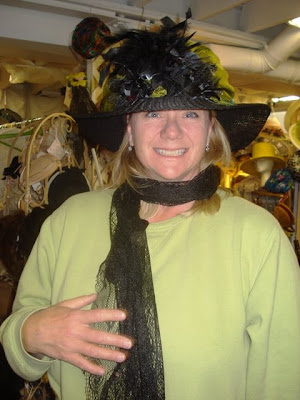 I loved this hat because I always wear this color green -- it wasn't vintage, though, just "vintage look." 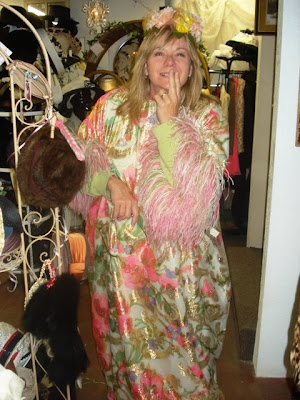 This outfit was crazy! It reminded me of something the wife of the landlord on the old sitcom "Three's Company" would wear! Check out those feather sleeves! She's wearing another of the hats I loved -- but it was too small for me. I apparently have a much larger head than most women of the bygone era.

I did find one little black cap with a veil that I really, really wanted! It had little felted flowers with rhinestone centers on the back, and was big enough for my huge head! It was out of my price range, though I'm sure was worth every penny!

But, can you see all the hats and stuff in the background of the photos?! I was dying to get a grab bag of millinery flowers that had fallen off the hats, and sure I'd find one in her shop, but alas, I was wrong.

After that, we were ready to eat. We went to Landry's, a lighthouse-shaped restaurant you can see from the highway in South Denver. It has the best seafood! We both had a shrimp dish. 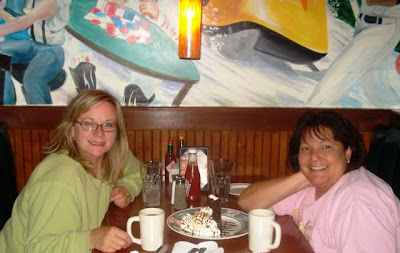 And then, of course, our birthday cake!

It was a lovely day, and will be the last shared birthday celebration for a while, because just a few days ago Phyllis told me that they're moving. To Georgia. Sigh.

(I'll be regretting that sewing table -- and looking for another just like it -- for the rest of my life, how much do you want to bet?)
antique home vintage