- September 02, 2009
I've seen the film, and now I'm reading the book Julie & Julia. I like the book a lot -- Julie Powell has a unique voice, and it's light and quick. Reading about her culinary endeavor is really taking me back -- back to my final single and early married years when I was genuinely annoyed with Alice Waters for living the life I should have had.

In those days my favorite pastime was watching the cooking shows on public television and The Food Network, especially every Saturday morning. I'd have my coffee with the Jacques Pepin and often would still be sitting there to eat lunch with Two Fat Ladies. 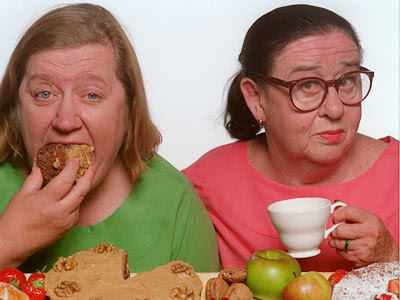 The two fat ladies were Clarissa and Jennifer, two Brits who loved to cook home style foods. I'd watch in fascination at they wheezed jabs at each other, each of them cooking part of a fattening meal. No butter was spared, no animal fat was deemed too sinful. Sometimes they'd drive out on their motorcycle with sidecar to a farm and pick out an animal -- then it would be back to some clunky country kitchen to kill, skin, and carve it for cooking. Often one or the other of them would be poking dressing into the carcass with her chubby fingers, then wrapping it with slippery pieces of bacon before sticking it in the oven to roast in its own juices. None of it looked palatable -- it was, after all, British food (no offense to anyone out there...) But I still had to watch -- it was like a train wreck. You want to look away, but you just can't.

Oh, I cooked some fabulous meals in those days. Often I cooked what I'd just watched on television that morning! And baked! Because I was in the SF bay area I had access to so many wonderful ethnic markets, gourmet shops, and fresh fish! And don't even get me started on the restaurants! It was heaven, I tell you.

Then, like Julie in the book, I began to feel sheepish over how much money I was spending on fine food, and wine. And after a bit I couldn't enjoy the Two Fat Ladies anymore because I realized, uh, just how they'd gotten that way. I had to make a decision to focus less on food and its preparation, at least until I could feel the same wild abandon with healthful meal preparation as I had with rich and delectable food.

And that's where I'm at now, all these years later. We're just coming out of the time of life where I try to cook only what my son likes -- and that's because his palate is becoming more sophisticated as he ages. It was a looooong time coming!

Maybe I'll take my own stab at cooking through Mastering the Art of French Cooking, or something like it, someday. Any suggestions for landmark cookbooks that are healthier than Julia's?
home

Jenny said…
What a fun post! I'm afraid that as a culinary misfit, I can't recommend a cookbook, but my 11-year-old daughter loves Ina Garten. She watches all the cooking shows at our house and actually cooks. Her spaghetti sauce is wow! We all watch Hell's Kitchen-sort of a cooking show! Anyway, I'm rambling, but I had to tell you I enjoyed this post.
September 2, 2009 at 5:18 PM

Pretty Things said…
Have you ever tried the Barefoot Contessa's cookbooks? I love them because they're relatively simple and they make up deliciously!
September 3, 2009 at 12:20 PM

Michaele Sommerville said…
Channel surfing, I stumbled across Two Fat Ladies and AM HOOKED! Oh my, only four seasons, but these ladies were a hoot!
July 3, 2010 at 8:39 PM