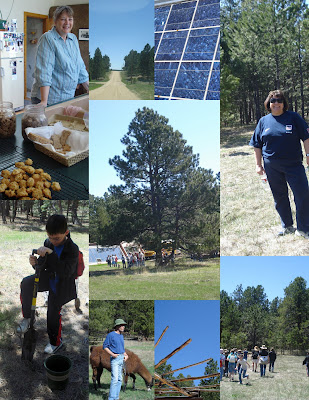 One sunny day last week I had the privilege to accompany my son's sixth grade class to visit a teacher's home in a nearby neighborhood. 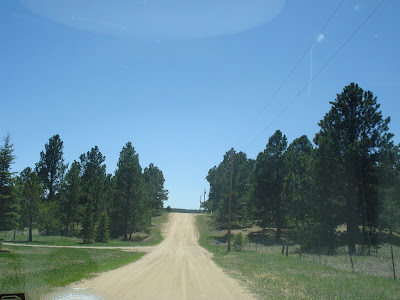 The teacher wanted to share his home with his students because he had spent four years building it on his five acre property. The home is completely sustainable. 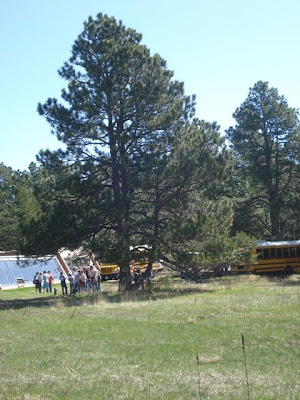 In the photo above you can see the side of the house to the left of the tree and school buses. This is the wall of windows, which he doesn't want or need to cover as the house is located at the very end of his property, far from the road or city lights. 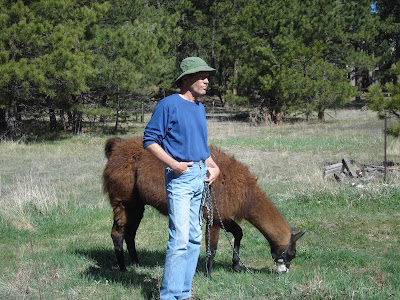 The fellow with the llama is a neighbor who keeps 27 of the creatures and brought one over for the kids to see. He toured also the kids through his farm set up, which includes goats for cheese and milk and chickens for eggs.

The teacher told the children how he built the house; here is how I understood it, in a nutshell: he began by excavating a huge hole on the home site, and then building up walls with discarded tires inside the hole. The tires were covered with a natural mud mixture, and then reinforced with cement. When the structure was finished he took all the dirt he'd excavated and built it up along the house's back wall to create a cavelike effect. This is what helps the home maintain its stable temperature year round: between 65 and 70 degrees. The front of the home is that wall of windows in the photo above, and on top of the roof he has a solar panel. 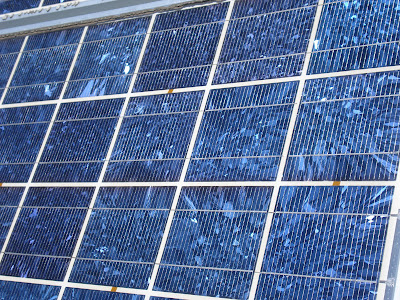 We were able to walk on the roof, which is coated with rubber, again from recycled tires, because the dirt mound against the side of the house makes it accessible as if you're climbing a small hill. I'd never seen a solar panel up close. It's beautiful! The energy generated by the solar panel is stored in large rectangular battery casings inside the house. He's not on the grid, so he doesn't sell energy back to the power company, but he can store enough to be safe and secure year 'round. He gets his water from a well on his property. 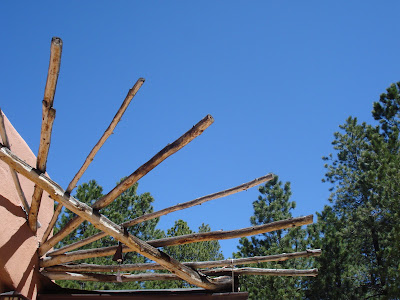 I liked how he made the outside of the house look like a natural adobe home, and how he added lots of pretty details, like this awning. He had stained glass window details indoors, made from recycled glass bottles, and also a beautiful antique window sill on a closet door. The inside walls were a mixture of the natural clay left exposed, and the shiny, white sort of finish you see inside adobe homes.

The house was long and thin -- only one room deep in any place -- to assist with the efficiency in heating. He told us he only had to use his wood stove once during one blizzard this past winter, for a few hours in the middle of the night when the temperature dropped. 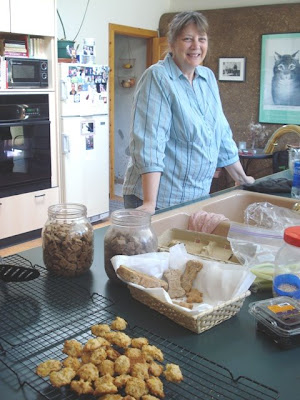 A friend of his was in the kitchen baking up, of all things, dog biscuits! They smelled so good! She runs a business doing this, and she let all the children try one because there's nothing in them but healthy, natural ingredients including vegetables, berries, etc. The ones we tried were pineapple. She explained the kitchen to us: the stovetop, oven, and refrigerator run on propane tanks. The natural stone flooring throughout the entire house is a breeze to clean: like professional restaurants, there is a large drain in the kitchen floor so that the stone tiles can be scrubbed or mopped and then hosed down! Wow! I was so impressed and immediately wondered why I didn't have that going on in my kitchen, too! 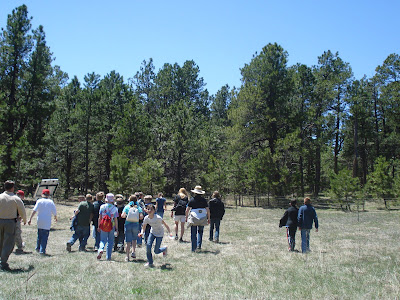 The kids had each created field journals and they were responsible to complete them while on the field trip; they needed to find and identify plants, animals, seeds, etc. and were encouraged to photograph what they found. 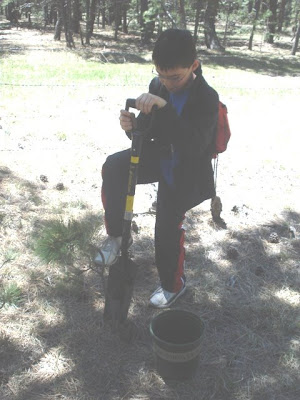 The best part, I think, was when the teacher invited them to help him thin out a grove of pine trees. The children had to visit the composted soil pile out back, shovel some into a wheel barrow, then take the dirt to the grove. They could choose a small sapling, dig it up, and then refill the empty hole with the composted soil. They were able to take the trees home. (Ours is still sitting on our porch, waiting to be transplanted.)

The kids had such a great time -- and so did I! I was surprised by how on task and motivated most of them were to learn, and how respectful and grateful they were to have been invited to the teacher's home.

When we first arrived, the teacher explained that there was evidence of a certain tribe of Native Americans on his land, and that tribe surely considered all of nature and the land to be a place of spiritual significance. He said he and his neighbors felt there was something spiritually special about that land, too. I truly felt that peace when I was there. It was a lovely day.