Of Course I Found Time for Antiques...

- May 06, 2009
On Sunday after breakfast at The Cracker Barrel with my in-laws, we headed east back to Indianapolis. This is mostly what we saw: 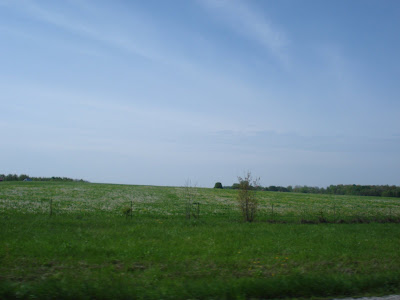 But sometimes we saw nice, small town scenes, with flags waving on Main Street, like this: 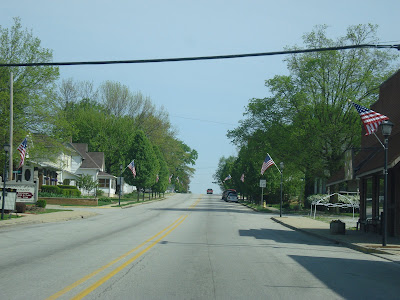 I kept my eyes peeled for an antique mall or historic old town signs, and finally my vigilance was rewarded. There was Gilley's, and also this Antique barn. 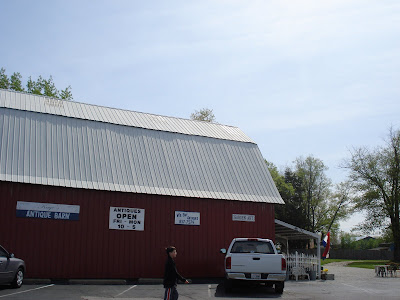 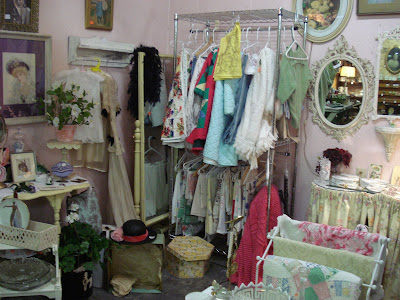 I almost bought a bark cloth lap quilt (hanging on the tall rack, far left) but I restrained myself due to the lack of space in our carry on luggage. Instead, I made do with an antique handkerchief in the SMWC school colors with my initial "L." The only other item that tempted me was a McCoy planter, the one of the dog playing with the turtle.

After that stop, we drove on and stopped at a steakburger place that's giving Steak n'Shake a run for its money, called 96th Street. When we ordered, we learned that their combo meals, which included a fountain drink and fresh cut fries, were half price! I thought that was so great of them to be so considerate, due to the economy, but then I saw this sign on the soda machine: 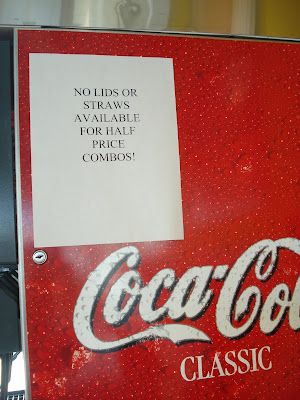 On the trip home, we were entertained in the airline terminal by loads of stately, expensive looking women carrying huge hat boxes. That was when we remembered there was another big event this weekend: the Kentucky Derby! And what a Derby! Don't you just love it when the underdog wins? I do!
antique quilts

Lydia said…
How nice of you, Laurie, to share in your very special event in your life with your family. Enjoyed the pics and video also.

Unknown said…
I love antiquing. The photos look so inviting. There is nothing as exciting as the Kentucky Derby, especially when you don't expect the horse to win.
Karen
May 6, 2009 at 10:17 PM

Christine said…
Congratulations on your gradulation. You should be very pround of yourself. It looks like you had a lot of fun too!