I have to begin by saying how much I appreciate my family, and how willing they were to go on this whirlwind weekend to Indiana in my honor. I know I have the best husband in the whole world, and endeavor to deserve him. My son was such a good traveler, despite having to get up at o'dark thirty to head up to Denver airport, and freeze on the long, cold walk through the parking lot to the terminal! He kept himself busy during all the sitting around by playing with his handheld games, listening to his Walkman, and snacking. Ultimately, I think he was driven by his eagerness to see his grandparents; it has been a year since our last, short visit with them. They were kind enough to drive from St. Louis to meet us in Terre Haute and spend the weekend at the same hotel as we did. It meant a lot to me because both of my own parents have passed away. 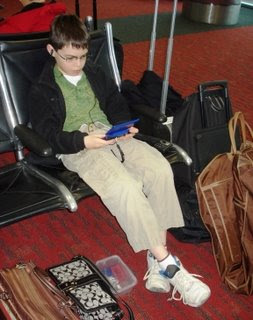 We flew Southwest and it was a pleasure -- really! We didn't check bags so it was a very quick, nonstop flight to Indianapolis. And, while we didn't have the rapping flight attendant, we did have one who was gunning for some recognition of her own - she sang little ditties instead of the usual safety and arrival speeches we've all heard a gazillion times.

I have to admit that last week before we left I was uncomfortable about our flights due to the flu scare (thanks alot, VP Biden!), so I was vigilant to have us drink Airborne and use Purel hand cleanser as much as possible, not to mention forgoing the ice in our in-flight drinks, etc. I was eagle-eyed, checking for flushed faces and runny noses, and listening for coughs or sneezes among the crowd. You know what? I didn't encounter anyone that appeared ill.

We met our in-laws at the hotel and had a nice visit and dinner with them before heading off to get some rest. The next morning we left the hotel around 8 a.m. for our long day at the College. It began with me picking up my "hood" to complete the cap and gown ensemble, having my portrait taken, and then attending the Baccalaureate Mass held for us in the College's beautiful chapel. I was raised Catholic, but don't attend a Catholic church anymore, so it was a walk down memory lane for me. The service was complete with a small orchestra, a choir, and very traditional elements, such as incense.

My son later told me, "If our church was like this, I'd want to go more often." I asked him why, and he said it was because the chapel was so nice (I think he meant, architecturally ornate) and "they really worship God, instead of talking all the time." I loved his perspective on the difference between the church services.

After the service, we had a buffet lunch in the college's cafe, which was delicious and sustaining for the excitement ahead of us! My son had seconds and thirds of the mashed potatoes and gravy!

We had a little while to wait before the Commencement exercises, which my husband spent taking videos with the camera we got him for this past Christmas. Every time I looked up, it seemed, he was filming something! Here's a picture of him videotaping me. 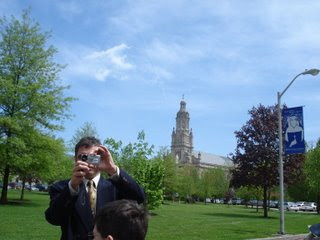 Here's a little sample; now, be forewarned, there's nothing exciting on this clip, unless you count me humming, "If I Only Had a Brain" from The Wizard of Oz exciting! (The Scarecrow was on my mind at that moment because he, too, ended his journey with a diploma.) Please note: the audio on this video is poor, sorry about that!

Since I couldn't carry my purse during either the Baccalaureate Mass or the Commencement Exercises, it fell to my son to hang on to. I was tickled by his totally nonchalant, unquestioning obedience to walking around all day carrying a purse. He turns 12 in less than a month, and I don't think we'll ever see him being that compliant and un-self-conscious again! 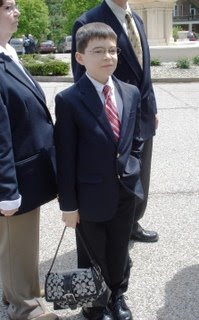 At 1:15 p.m. we began to line up outside of the college's Conservatory for the ceremony; my feet were tired from being on them so much, which I attributed to Old Age until I heard all the young women around me complaining of the same thing! I guess it was a combination of dress shoes, standing, and excitement, for all of us. 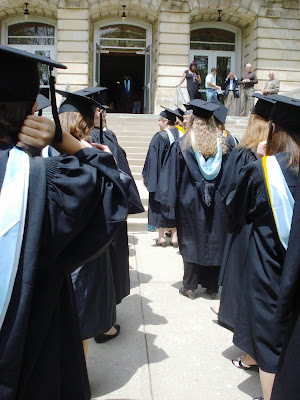 The young woman standing in front of me was keenly aware that it was the end of her journey at college; she seemed very contemplative and full of emotion. The young woman standing behind me had traveled a great distance like I did: she was from Nashville, TN. The young woman behind her was 8-1/2 months pregnant! I also met a woman who was closer to me in age and had completed the Distance program like me who said that she didn't start college until all 8 of her children had completed their degrees! 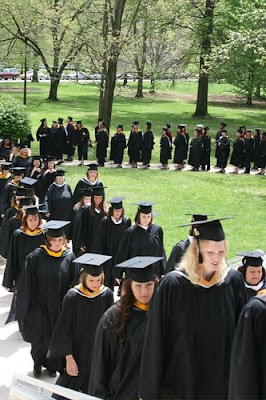 Once inside and seated I found that our group -- Bachelor of Arts recipients, a dying breed judging by the way the Bachelor of Science recipients outnumbered us -- was first to receive our diplomas. That was great because then we were able to relax for the rest of the event. I had sneaked my camera in and amused myself taking photos of the ceremony.

Another cute son story: after the ceremony, my son referred to the college President in his Ph.D. robe as "the Pope who gave you your diploma." Well, his gown was pretty fancy, and then there's that hat: 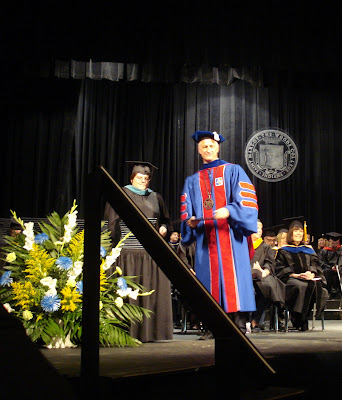 I already mentioned that the most awesome moment for me was when we graduates switched our tassels from the right to the left side of our caps -- I got chills and it was the only time I felt like I might cry tears of happiness! I still get a little rush just thinking about it.

After the ceremony we marched out to the cheers of all those proud, deep-pocketed family members in the audience. We gathered on the steps for our group photos which was all kinds of fun, because we were all happy, relieved, and ready to party! 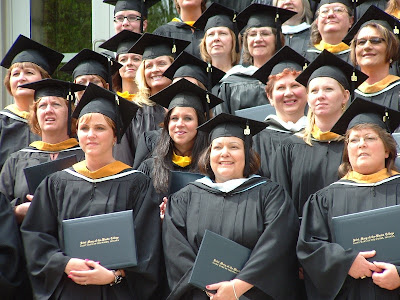 My family ended our day with a celebration at a family owned Italian restaurant that had gotten very good online reviews. It was superb. I had orange roughy, and a generous helping of my son's Fettucine Alfredo. Their homemade bread sticks were heavenly! For dessert I had a chocolate tuxedo cake and a latte - with whipped cream! It was, after all, a celebration! 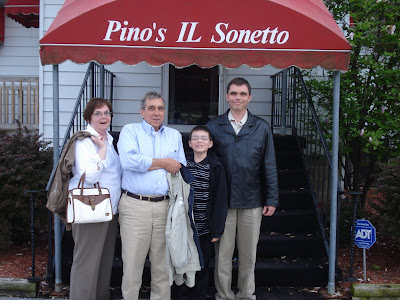 They all look very happy and well-fed, don't they?
school

said…
I love that photo of your son so graciously holding your purse for you! Bless his heart. What a wonderful day you all had. :o)

barb cabot said…
Thank you for sharing this momentous and proud occasion. I always want to cry when I hear Pomp and Circumstance. Your son is so adorable. What a handsome young man and what an example you have set for him. Wonderful accomplishment. Congrats again. Be Proud of yourself, my goodness this is wonderful.
May 6, 2009 at 1:04 AM

Micki said…
Thanks for sharing this wonderful even with us. It is so nice to see and share the graduation with you.
So glad that you had a great time! Your son is darling!
Micki
May 6, 2009 at 8:15 AM