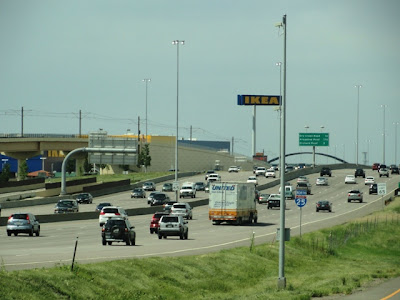 You have no idea how excited I was that the promised IKEA store opened up this past week in nearby Centennial.  It just appears as if it sprouted up as you come around a bend on Highway 25, and this one is huge!  I've been a fan of this store chain from my days in CA; if you've ever been in one, you know it's just a refreshing shopping experience.  One year, we furnished my son's "big boy room" (when he moved from the nursery) from IKEA, in a lighthouse theme.  So much fun! 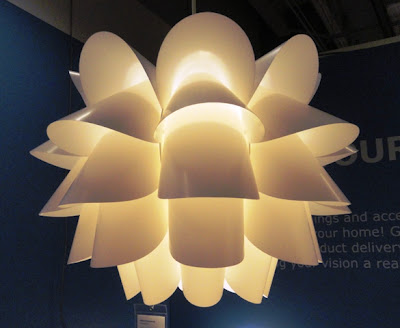 We had to go on the second day it was open.  This time, I was most enamored by the different lighting they had available... 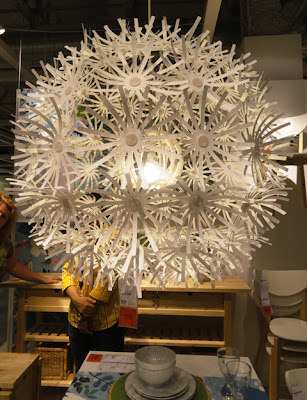 like this one that is actually made from a bunch of thin, paper-like stars! 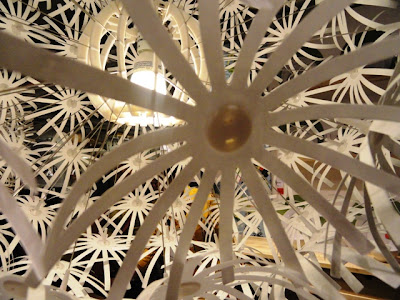 I also found myself wanting a pillow, like this one: 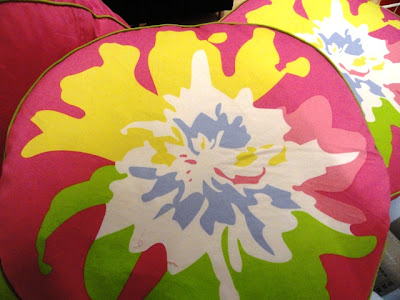 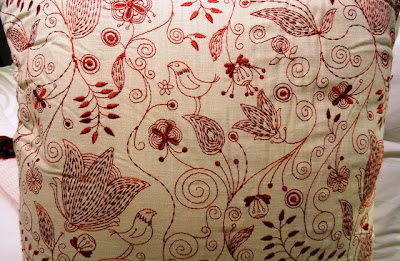 which would have looked so cute with this bedding set -- and look at those adorable little tube pillows! 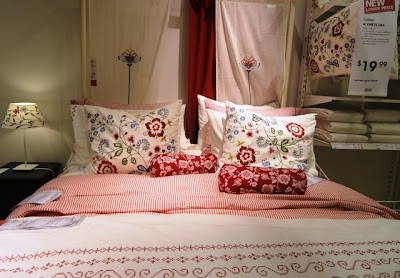 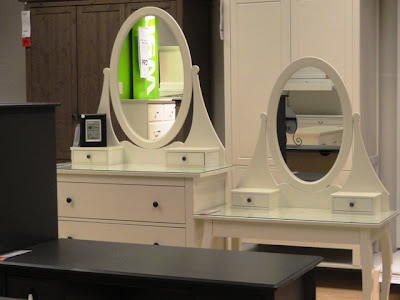 It's been probably 3 years since I've been to an IKEA, and I noticed their style has changed to include a more retro look instead of their previous streamlined, minimalist stuff. 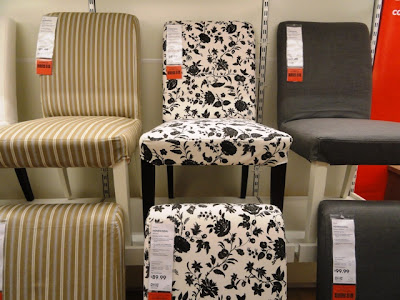 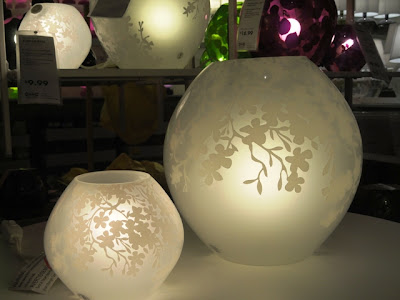 And a bit more "feminine."

We spent about 2 hours walking around the store, seeing what was new, and then bought mostly practical things, like 99 cent toilet brushes in holders for each bathroom, and thrifty lint brushes.  But we also got this wonderful chair that I saw there years ago and have wanted ever since: 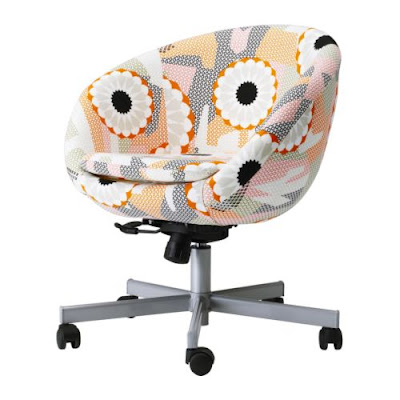 I've been waiting months for the store to open to buy it!  I'll have to take a photo of it in my home to show you -- it's a bright splash of color and design in my green and purple living room! 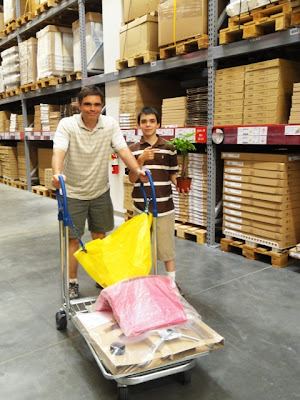 We also bought a bright pink chair for my office -- you can see the chair part on the dolly here.  (If you've never been to IKEA, you have to pick up your purchases from the warehouse and assemble it yourself.) 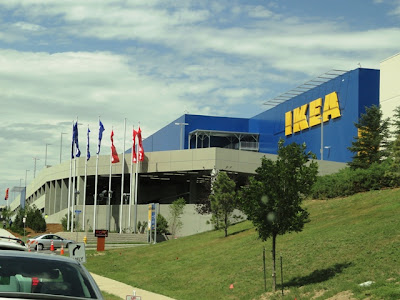 Have you ever been to IKEA?  What do you like to buy there?
family home

The Junque Seeker said…
LOVE IKEA! We first visited the one in Minneapolis. We spent the evening there, had dinner, and went back the next day for breakfast. I just couldn't get enough of everything, and in case you couldn't tell, the food is pretty good, too! We went to IKEA in Round Rock, TX, last year while on vacation and I bought a very basic tan rug that is absolutely the BEST rug ever. It's in front of our French doors - the ones the dogs go in and out of a million times a day - and after almost 10 months, it has nary a spot. It will look filthy, but we just vacuum it and, "Voila!" No spots!
July 30, 2011 at 11:53 PM

Dee in N.H. said…
Mmmmm, looks like some really great stuff to be found there! Love that chair you got! I have never been to an Ikea but it sure does sound like fun!
July 31, 2011 at 2:51 AM

Beth Leintz said…
I have NEVER been to an Ikea, but I'm curious- I love the red and white embroidered pillow- I want to make one like it, and I know it would be easier to buy one...but I can't help but think how much fun it would be to stitch those little birds and vines.
July 31, 2011 at 5:02 AM

Sherry said…
I live in England, UK and yes, also love a visit to Ikea! I especially like all of the storage units and it's brilliant if you're doing a complete room makeover (not that I have, but Ikea would be my first stop). I love the funky chair you've bought, definitely worth the wait!
July 31, 2011 at 10:15 AM

Unknown said…
EEEEE I Love IKEA! We have to travel to one outside of Washington D.C. (about 2 and 1/2 hours) but it is soooo much fun! I Have that exact chair! Great minds think alike! I managed to find it in the clearnace section and got it for 1/2 price. I guess someone returned it, nothing was wrong with it. Replaced the boring old "office" chair that sits at my crafting desk with it. It is so comfy you're going to Looove it!
Glad you had a good time!
July 31, 2011 at 12:46 PM

Lisa said…
I love Ikea and so wish they would open one here in Oklahoma. Last year when I was working on my craft space we went and purchased some of those expedit book cases for storage. It's definitely time for another trip!
July 31, 2011 at 2:28 PM

Tammy said…
My sister has that giant paper chandelier. She said it took forEVER to get all those paper flowers attached in the right spot, but she loves it! I love the Ikea catalog, but have never been in an actual store. Looks like you had fun!
July 31, 2011 at 6:30 PM

Claudia said…
My husband's sister and her hubby took us to an IKEA store in Michigan. We spend several hours there including lunch. I fell in love! I so wish there was one within driving distance. That day I bought lamp shades, skillets, and kitchen utensils and spent very little money.
July 31, 2011 at 7:01 PM

GardenOfDaisies said…
I have never been in an Ikea. Maybe one day it will come here. Those lights are amazing!
July 31, 2011 at 9:29 PM

Unknown said…
Ah how fun! I know you will smile every time you see one of your chairs. I love Ikea, also. We had one in Washington, DC that I loved to visit. I love the room settings they do. Little vignettes.
August 2, 2011 at 7:37 AM