Longing for the beach

- August 23, 2011
Summer's been over at our house since Ben went back to school on August 1, but I'm having trouble letting go.  Luckily, the weather's still been great around here.  It's Dennis' last few days at his old job, so he agreed to go out to a Sky Sox baseball game Saturday night, even though he knew we'd get home late and he'd have to be up very early for work.  How's that for a short -timer's attitude?  I love it! 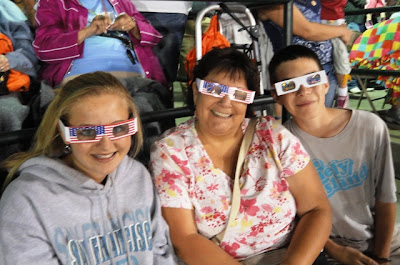 Here we are all ready for the 3D fireworks show after the game!  Unfortunately, the game went into a tie-breaker inning (we won) and by the time it ended, the rain had started and the fireworks were cancelled.  Boo! 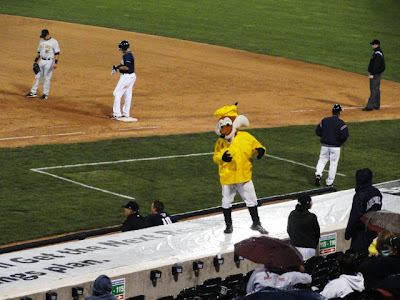 I thought mascot Sox the Fox's little rain suit was so cute!
We never made it to the beach this summer.  So, the other day I had the idea to put out some of my favorite beach souvenirs, instead. 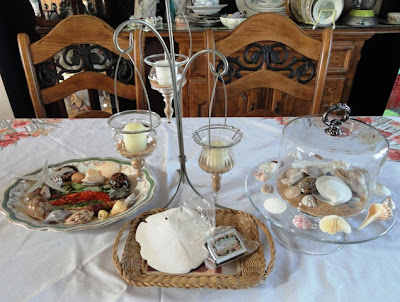 The candle holder in the middle is something I found at Goodwill -- it looked brand new.  Before putting in the candles, I filled each of the votives with decorator sand (that I also found at Goodwill!) 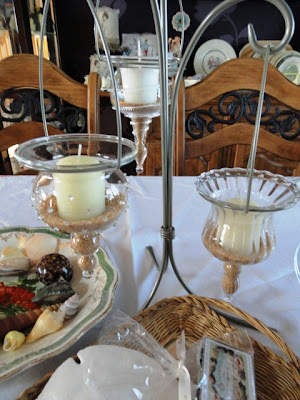 I put out a small cake tower and arranged some of my favorite shells on more of the sand; they were part of my late grandmother's collection from her San Francisco seaside days. 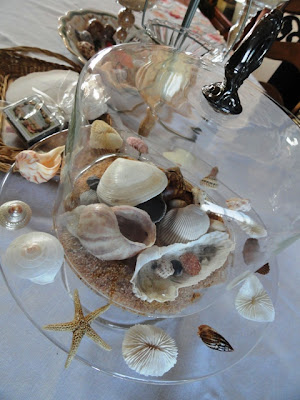 I covered that with a cheese dome.  I also arranged some estate sale shells around the edges of a pretty antique seafood plate: 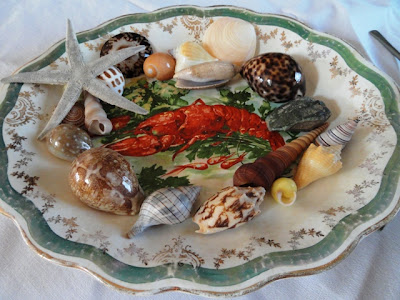 The star fish on top was a gift from our friends, from one of their beach vacations. 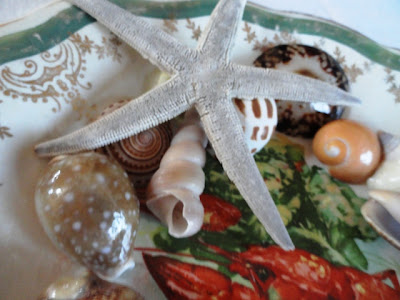 I love the little wicker platter, which was a souvenir from Mexico found at a thrift store; I placed a large sand dollar on it, as well as a pretty packet I bought at a very quaint gift shop in Pacific Grove, California the last time I was there. 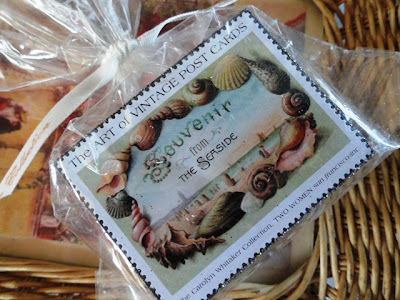 (Sigh.)  It's not sand between my toes, but it's the next best thing I guess.

LuLu Kellogg said…
As soon as our house sells that is where we are moving...to the coast. I can't wait to get back there!

LOVED your shell display...makes me homesick but at least I know I am going back!!

Anonymous said…
What beautiful and fun photos! Your shells are gorgeous. I love the way you arranged them on that antique plate. Stunning, my friend.
August 24, 2011 at 6:53 PM

barb cabot said…
I hope the summer will last as long as possible for you. I'm glad you got to the game. Your table setting with the seashell theme will keep summer and the beach in your heart into the Fall season. Cheers Laurie!
August 24, 2011 at 10:46 PM

Lisa said…
Oh, the beach ~ it's where I so want to be... One day!
I *love* the sampler you made. I had the opportunity to take a class with Charlotte Lyons last year at the Mary Engelbreit conference and she is just a lovely lady - and so talented too!
August 25, 2011 at 4:37 PM