It's not something that comes up, I realize, in everyday conversation.  And of course most people who read my blog have likely  never driven with me.

I am one of those overly-cautious drivers -- always have been.  Very defensive.  Part of that comes from driving the the SF bay area most of my life.  But mostly, it's my personality coming through.

I drive my speed-demon friends crazy.  I will stick to the speed limit because I know that it's not a suggestion, it's the law.  My neighbors joke about it, dismissing the fact that their children are the very reason I drive as slowly as I do along the big bend on our block.

Which is what makes what happened the other day so ironic: I got a speeding ticket.  On a major highway.  Where I was clocked, according to the CSHP, going more than 25 miles over the speed limit! 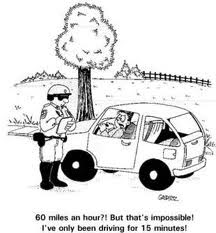 There I was, driving along when a highway patrol car came racing up behind me with lights flashing.  It was surreal.  I pulled over, thinking he wanted to pass me.   I couldn't understand why he wasn't just going around me! But then he pulled over behind me.

I opened my window, and the first thing I said when he told me he'd just clocked me at that speed was, "Are you sure it was me?"

I'm pretty sure that was when he decided to give me the ticket.

But I was serious.  I just could not believe it.  I had been passed for the last 2 hours by faster drivers; all the way up the highway they were speeding by in the commute hour traffic, talking on their cell phones, applying makeup, weaving in and out of the heavy traffic.  All the while I was concentrating on driving, being safe, getting to my destination in one piece.

At the point I was pulled over, I had just realized I was to take a left exit, instead of exiting on the right as every single other exit had been; and I was hurrying to get across the three lanes.  But, safely as always.

I guess I was speeding up -- literally hurrying.  And the exit approach posted speed limit went down, unnoticed by me, by 20 mph.  I saw the two patrol cars parking along the ramp, and it registered that they were looking for speeders.

So, I was tagged.  I started crying, of course, and couldn't stop.  Worst of all, the ticket is to Appear in Court.  So I have no idea what it's going to cost.  I guess I could even get charged because my speed was so much above the speed limit!  I have no words.

I was really shaken up.  I wasn't sure I could continue along to my destination, which was meeting the other Colorado Silver Bella gals, Melissa and Suzanne, in the northern town of Longmont.  All I could think about was those three words: Appear. In. Court.  And the fine.  I got back on the road in a daze.

Once I got to the coffee shop, of course, the gals quickly made me (mostly) forget all of that.  We sipped coffee and talked about Silver Bella, which we are all attending as first-timers!   We talked about our swaps, our hat plans, and which classes we're taking.  And we talked a little bit about ourselves, and our art -- and everything else.  It was easy and relaxing!  We did miss the 4th Bella, Jeanelle, who lives near me, as she was ill and had to miss the get together. 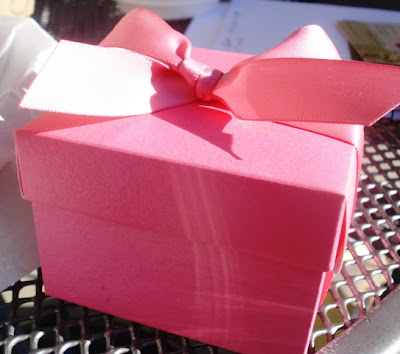 Suzanne gave us each a gift -- how sweet was that? 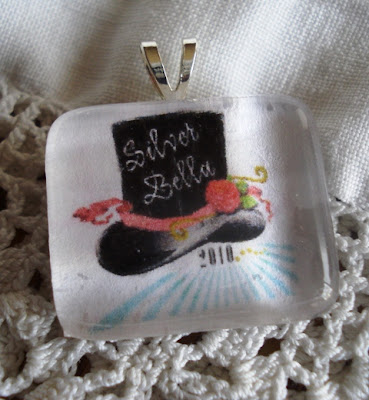 It is a pendant she made for us -- isn't it lovely?  Of course, we each put ours on and wore them the rest of the day.

After coffee, we made our way just a few blocks to an indoor flea market type antique consignment store called Tables to Teacups.  We shopped for about 90 minutes there.  It was fun.  Best of all, we all now have some friendly, familiar faces to look for in the crowd at Silver Bella!

By the way: on the return trip I noticed two patrol cars on the same ramp in the other direction.  Obviously, they know that people will be surprised by the drop in the speed limit, and they will have a chance to tag them.

I guess that into every life a little speed trap must fall.
antique Silver Bella

Alyssa said…
Sorry to hear about the ticket. I've only been ticketed once myself, always trying to be a careful driver and all. Sounds like you had a wonderful time with your friends! The pendant is quite pretty.
October 23, 2010 at 12:12 PM

Bunty said…
You poor thing - what awful luck - I'm sure they were sitting in wait to catch people out. I would have been shaken up too. I hope that you were able to enjoy your pre-Silver Bella get together despite it. Not long to go now - I bet you are excited - I certainly would be.

Christine said…
Oh, I'm so sorry for you! I call myself a grandma driver because I'm very cautious as well. I bet it really was a surprise!