- June 12, 2011
I stopped by the Etsy Crafting Party given by Denver Handmade Alliance and Fresh City Life this past Friday for some fun on the theme of Grey Gardens. If you didn't catch the movie, it's about the aunt and cousin of Jackie Bouvier Kennedy Onassis.  The two women, both named Edie, were aristocrats who lived alone in their crumbling estate, penniless.  They became reclusive cat ladies, living in squalor.  A documentary was filmed about them, in which their eccentricities are on display, as is their strange and probably unhealthy mother/daughter relationship.  The documentary inspired a recent film starring Jessica Lange and Drew Barrymore; even though they have long since passed away, the saga of the original Edies has a cult following. 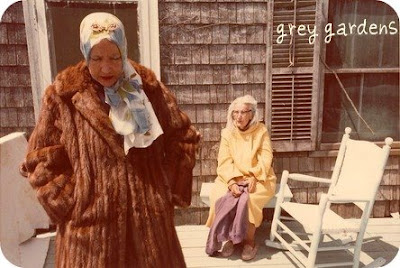 Grey Gardens had plenty to inspire the Denver crafters for this party; a couple of volunteers were happy to outfit us in Little Edie-like head scarves, and there was a "station" with glue and baubles which we could use to decorate the scarves for the full on look she inspired! 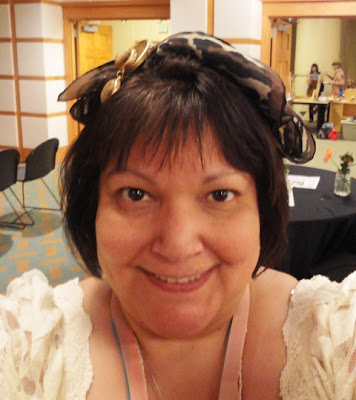 Of course, some gals showed up in Edie style already!  Here I am with one of them: 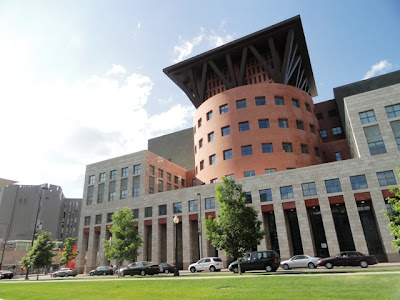 The party was held at the downtown Denver library, in one of their conference rooms.  At one end of the room, they screened the original Grey Gardens documentaries from the 1970s and the HBO film I mentioned above. 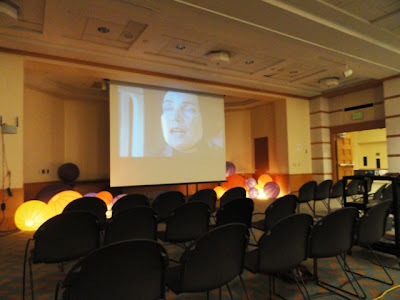 It was fun to do the Grey Gardens-inspired crafts.  In honor of Edie's fascination with horoscopes, we decorated some notecards with signs of the Zodiac... 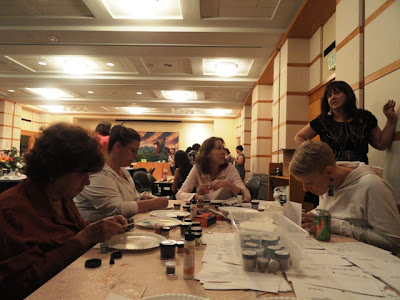 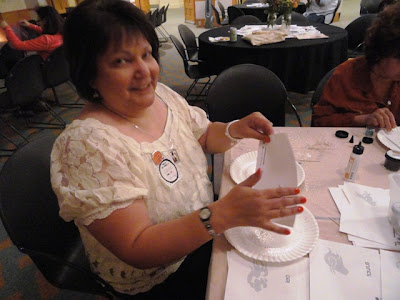 You might be able to see, in this photo, the little button I made from provided clip art -- it has one of  the quotes from the movie, "That's all I need: an ordered life." 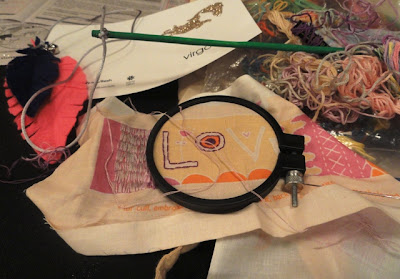 We also made cat toys (top of photo) with felt, little bells, string and a dowel.  We were encouraged to bring a craft to work on, so I brought a cuff I've been embroidering, which is one of Charlotte Lyon's designs.  You might notice that the tables we were sitting at were decorated with newspaper placemats, an Edie decoration of choice!  (Also mason jars full of pretty cut flowers that we were invited to take home afterwards.) 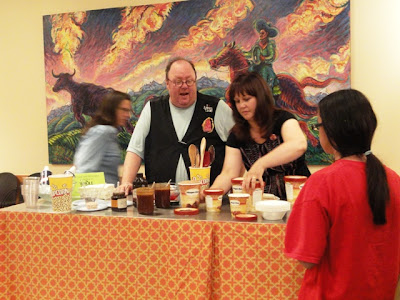 Of course, there was food!  Whole Foods generously supplied cheese, crackers, spreads, veggies, etc., and the group served a couple of Grey Gardens-inspired snacks, including corn on the cob and butter pecan (and other) ice creams.  On the ice cream bar (above) we could drizzle our dessert with homemade salt caramel, the making of which had been demonstrated there before I arrived by Hellimae's. 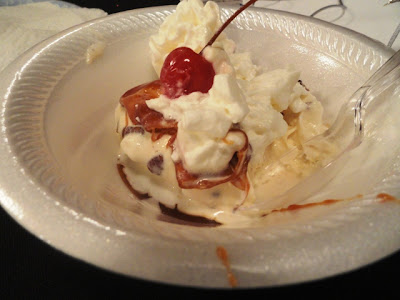 It was so yummy!  I'm very happy I stopped by and lingered for a couple of hours; it was nice to be downtown on a beautiful day, relaxing and stitching with the like-minded! 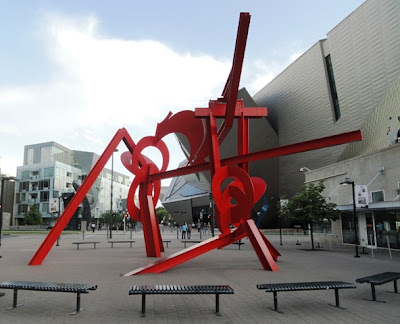 Marion said…
What total FUN!! I love, love, love 'Grey Gardens' (the original docudrama). It's an amazing look at two really insane women. (The cats crack me up...I see myself there in maybe 20 years of so. LOL!)

Unknown said…
Oh, Laurie...This is just a GENIUS theme! I love the whole story of the Beale family along with the 1970's Maysles' documentary! The recent HBO adaptation was pretty stinking entertaining too...What a fabulous event.

Suz said…
OMG, I thought I was the only person in the world who loved Grey Gardens. That is just a brilliant theme for a partyI Takes an arty crew to think of that. I just love your pictures...very fun.
Hugs,
Suz
June 12, 2011 at 9:24 PM

Betsy@My Salvaged Treasures said…
What a great way to spend the day! It looks like so much fun, and I'm sure a good time was had by everyone. I haven't seen this movie, but it sure sounds like something I'd enjoy. Great costumes!!
June 13, 2011 at 4:19 PM

Beth Leintz said…
Oh my gosh what a great idea- and how cool that people dressed up Edie style. I saw the original Grey Gardens, I'll have to check out the HBO version.
June 14, 2011 at 6:36 AM