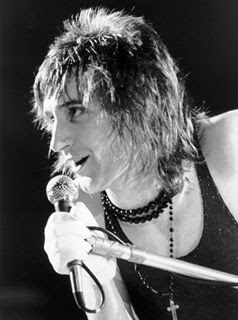 I just know I'm going to get flak from folks over choosing Rod Stewart as my inspirational Rock and Roll Hall of Famer for the Pop Culture Craft Challenge! But, I'm used to it. When I was a tween and teen my father would groan out loud at the mere mention of Rod's name. If Rod came onto the television in his presence, my dad would cringe and cuss and fuss! It was all that stick-up hair and the eye makeup - not to mention the tight pants. (My father could have been the inspiration for the song, "Money for Nothing" by Dire Straits...but that's another story.)

I was a fan not of his pop music, but of Rod's oldies -- songs from the time he spent with the Faces and Jeff Beck, and from his early days with Ron Wood (who I always thought looked like a negative image of Rod - same face, but dark hair.) I had all of his old albums. I loved him for songs like this:

Other favorites of his ballads are "Reason to Believe" and "You Wear It Well"; the latter contains one of my favorite lines of all time: "When the sun goes low and you're home all alone, think of me and try not to laugh." (I may have that put on my epitaph. It was the quote I chose for under my senior photo in my high school yearbook.) But, that was music of his that was well before my time. By the time I was old enough to listen to his music, Rod was releasing his albums "A Night on the Town" and "Blondes Have More Fun", and he'd crossed over into his flamboyant, pop music stage. Beyond those albums, all was lost. I feel bad that many people younger than me know him only from songs like "Young Turks", and from all the remakes he's been doing for the last decade or so.

I do love some of his pop songs, like "Maggie May" (which is why my yellow Lab has the name she does...), and will always consider "You're In My Heart" a classic. Did you know he's singing about his love of the game of soccer? In concert he usually dribbles a soccer ball onstage while he sings it.

Rod Stewart was my first concert, ever, in 1979. Even back then, being a Rod fan was uncool in my culturally sophisticated home town, but I didn't care. The concert was his "Blondes Have More Fun" tour, and it was a night I'll never forget! I was 14 years old and I came home with a shirt that said, "D'ya Think I'm Sexy." My mother flipped!

When he briefly reunited with Ron Wood for his "Unplugged" tour, I went to that concert, too, and it was wonderful, and redeeming. And, he made news just a few days ago when he surprised Jeff Beck on stage in LA. It was the first time they'd shared a stage in 25 years!

Anyway: about the Challenge: Have you ever noticed how large Rod Stewart's nose is, or how knobby his knees are? He is one funny-looking dude. That first time I saw him onstage, he turned sideways and ever since seeing that profile of his, I've come to characterize him in my mind's eye as a large, colorful, spectacular bird.

Thus, my Pop Culture Craft Challenge entry is my vision of Rod Stewart as a bird, complete with large beak and knobby knees, and dressed in the colors he wore on stage for the 1979 "Blondes Have More Fun" tour: 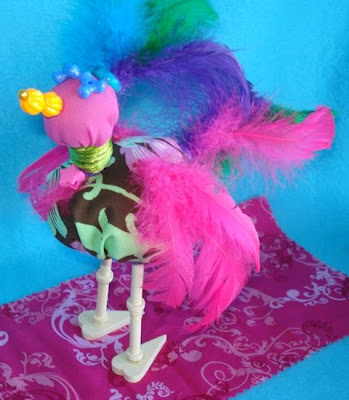 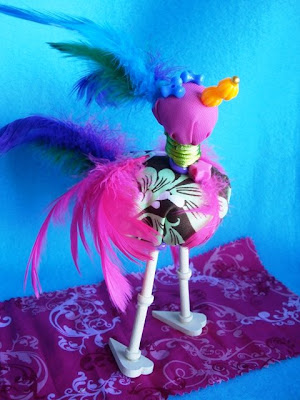 I made this stuffed Rod Stewart bird using fabric, feathers, beads, ribbon, wooden cut outs, paint, thread, and glue. It's the only one of its kind and it expresses my feelings for the Rod Stewart of my youth, and all the fun I had listening to his songs and watching him prance around the stage and shake his behind like, well, one crazy bird!

I'll leave you with the Maggie song - Rod and Ron are achingly young in this video and it is really worth watching!

Rod Stewart - Maggie May
Uploaded by newcanadian
Thanks, Missie Zee, for the fun!

Melissa said…
I love it! I never in a million years would have imagined Rod Stewart as a bird, but it is perfect. And I love that you used the colors from his tour. Great job :)
April 29, 2009 at 8:23 AM

Christine said…
Your Rod Stewart bird is soooo cute. I love him!