- April 06, 2009
Have you ever seen "Enchanted April"? It's a wonderful film and one of my favorites. This movie has it all - beautiful cinematography, to-die-for atmosphere, amazing costumes, superb acting... 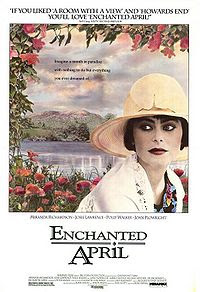 It received a couple of Golden Globes and was nominated for, but did not win, a few Academy Awards as well.

The film is about two married women, Lottie and Rose, unknown to each other, who are living dreary lives in early 20th century England. They see an ad in the newspaper to rent a villa in Italy for the month of April and hatch a plot to do the unthinkable, and something out of character for both of them, when they rent the villa for a girl's getaway. Here's a clip where the women visit the owner to secure the reservation.

One of the most empathy-inspiring moments near the beginning of the film is when Lottie stops in the pouring rain to record an expenditure in a small tiny notebook her frugal husband has given her for that purpose.

I thought of Lottie when I found this little red notebook at an antique show I went to yesterday -- and I had to have it. 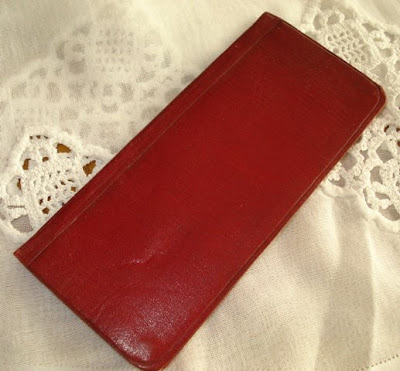 When I opened it up this morning I googled its author, Myriam C. Garrett, and found that she was born in Colorado Springs in 1895. This notebook records her purchases beginning in 1914 and through 1918; so, she would have been 19 years old and single when she began keeping track. According to the Google entry, her father was in sales so she would have been, I think, middle class. 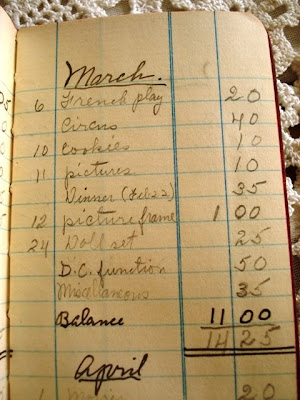 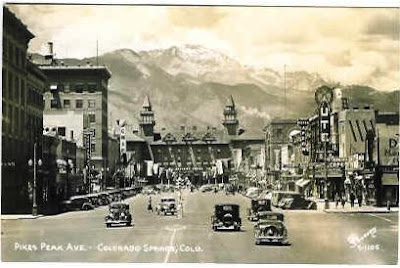 Especially interesting are her entries at the back of the book, for clothing over the years. 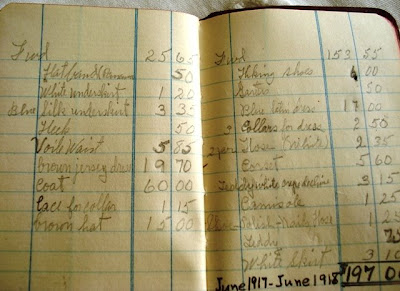 I love how she has entries for a Voile waist as well as hiking boots! This is surely because, as my mother-in-law has said, one must be rather "rugged" to live here! 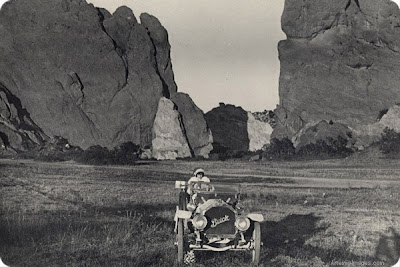 This is a photo of a woman in 1914 near Garden of the Gods, which is now a national park.

said…
Laurie, I've always meant to see Enchanted April but never have. Now that I have a recommendation, I'm going to see if my library has it; if not, it's going on my Netflix queue.

What an amazing thing to have such an amazing old notebook in your possession! I think it's so neat that you Googled the owner and found out a little about her.

Linda Sue said…
LOVED the movie- LOVE your find MUCH! That is the BEST! And is such great condition. Score!
Maybe I will go buy a little red book to keep track of the euros that dissapear so quickly in Venice, even though I am frugal- I really am- my friend on the other hand is a shopper!
April 6, 2009 at 12:35 PM

Laurie said…
Oh yes, Linda Sue - keep a little notebook so we can all swoon at the entries for your gondola rides and bottles of wine!
April 6, 2009 at 12:49 PM

Anonymous said…
What an interesting movie. Sounds like a good one. The notebook is most interesting. Isn't it amazing how people lived on so very little but yet at the time it was probably alot.

Thanks for the history lesson, I realy enjoyed your sharing this with me.

Christine said…
I too loved Enchanted April. It is one of my favorite movies. There are so many!!!

The little red book is such a lucky find. I can't belive you were able to find information about the woman. That's amazing!

Summer Gypsy said…
Laurie,
What a find!!!! I collect old diaries and such, and I just love to know that I'm holding a part of someone's life and hopes and dreams and just everyday living from a different time and place. You can be sure that I will be seeing "Enchanted April" soon!!! Thanks for sharing!! Have a blessed day!!!
Hugs,
Marilyn
April 7, 2009 at 7:16 AM

Alisa said…
What a find. I love to look into the past in this way. To think about her writing down her purchases, living her life. It is really fun.
April 7, 2009 at 12:50 PM

Charlene said…
I love this movie--and your book find is especially interesting me as I lived in Colorado Springs for a time--I loved it there and miss it still!
April 8, 2009 at 9:21 AM