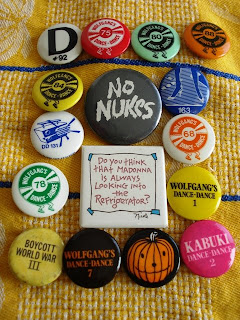 In the '80's I was living in the San Francisco bay area and there used to be a nightclub on Columbus Street called Wolfgang's. It was a huge place with an upstairs and downstairs and they held concerts there. When no acts were booked, they catered to those under 21 years old by letting us in to dance with the older, cooler, over 21 crowd. (Besides the disco called the IBeam, this was one of the only places you could legally get into in the City if you weren't of age.) They'd stamp your hand so you couldn't get a real drink, but that was really okay because it was cheaper to drink at home.

At some point, Wolfgangs started an ad campaign where they'd bill their weekend DJ and video nights as "Dance Dance"; when you attended, instead of a hand stamp they gave you these nifty little buttons. In the beginning they just said, "Dance Dance #_" but later they got more creative and did different artwork and such.

Soon the Kabuki Theater, another place that opened its doors and provided a DJ and a dance floor, also started having "Dance Dance" nights and, subsequently, buttons.

Actually, I'm thinkin' now, I'm not sure which was first - Kabuki or Wolfgangs. Anybody know?

In honor of Crafting With Cat Hair's 1980's Craft A Long theme, I'm posting this Dance Dance memorabilia, with a couple of other classic '80's swag mixed in, for your viewing pleasure.

Angela Catirina said…
Cool! I was in a tiny little, no nothing town in the 80 - and high school. No cool clubs in site. I do remember denim jackets being a wardrobe must have and everyone having collections of these little buttons peppered all over them. They were definitely a trend for the times!

One friend, in college, got a job at T.G.I. Fridays and it was part of his uniform requirement to have them for his work uniform. He called in recruits to help him decide which could be parted with for a work uniform and which would remained enshrined on his high school denim jacket. I remember all of the British band buttons stayed at home.

Laurie said…
Oh how funny! I still have trouble resisting those tiny buttons when I see them, even though they're no longer "in" -- at least not like they were back in the day...
February 4, 2009 at 3:36 PM

Melissa said…
Love it! Thanks for playing along.

I used to have a jean jacket with tons of buttons. My favorite was my Wizard of Oz one, "Aunt Em, Hate you, Hate Kansas, Took the dog, Dorothy". I guess that really wasn't a very nice button after all :)
February 5, 2009 at 5:55 AM