- December 05, 2011
I had an interesting day this past Friday -- one which included Jane Austen and a local hoarder.

Beginning with the latter, let me explain: the TLC show, Hoarding: Buried Alive recently filmed/helped a Colorado Springs resident, and a local church announced it would be selling off her hoard Friday.  You know I couldn't resist that!  The entire church sanctuary was FULL of her stuff.  (Doesn't that make you feel better?  I mean, I know I couldn't fill a church sanctuary with my stuff!)  The lady hoarder was there, too.  She kept telling everyone, "I'm a CLEAN hoarder.  I have a shopping addiction.  But my house isn't dirty like the ones you see on TV."
I was really happy for her, that she'd gotten help and was able to get rid of so. much. stuff.  The advertisements I'd seen for this sale said most of her stuff was new with tags, but I didn't find that to be true, unfortunately.  She had tons of new-in-the-box Princess House and Pampered Chef, but I wasn't interested in any of that.  I did find: 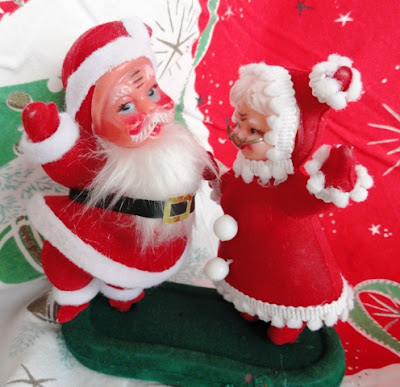 we shared a love of kischy Christmas stuff, like this adorable Santa and Mrs. Claus! 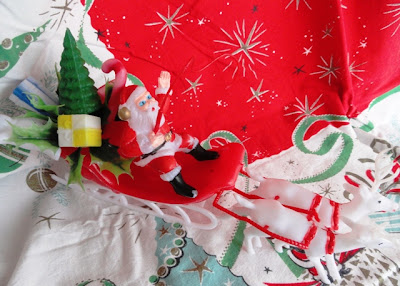 Also this little Santa and sleigh.  Although, upon getting him home, I found he is a little wild-eyed.  (With that look in his eyes, maybe he shouldn't be allowed to carry that whip.  What do you think?) 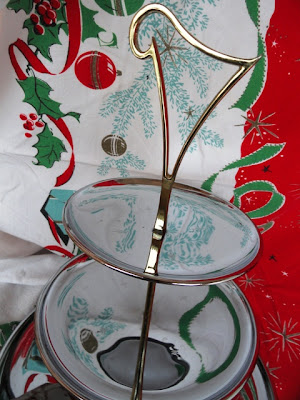 This was my favorite purchase, though.  It is a chrome, ca. 1950s 3 tiered server.  You can't see it, but there are little atomic-style stars etched into the plates.  I love it!

There were TV crews there filming us as we paid and left with our arms full of hoarder junk.  So, maybe you'll see me on TV next season!
Later that day, I took my husband on a date.  (Tomorrow's his birthday.) 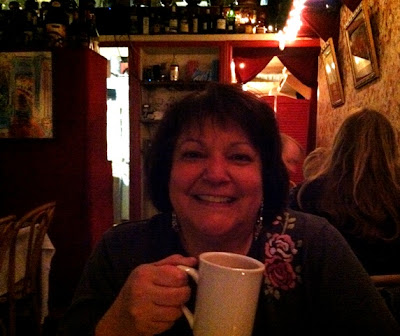 First, we went to a downtown restaurant called La Creperie. 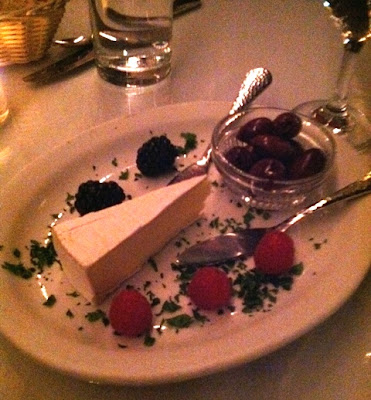 We started with wine and a cheese plate, then each had soup and a crepe.  Mine was brie and ham and it was lovely. 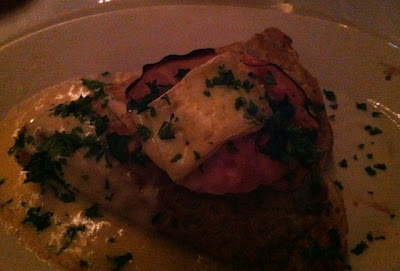 Then, we went to a locally written and produced musical celebrating the 200th anniversary of the publication of Jane Austen's Sense and Sensibility! 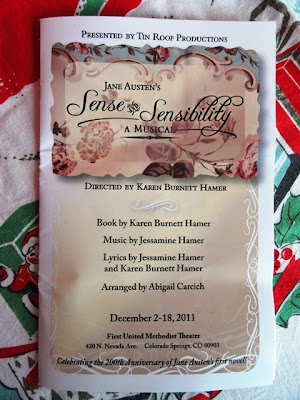 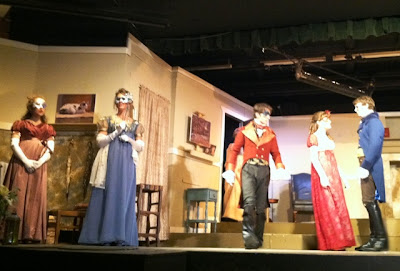 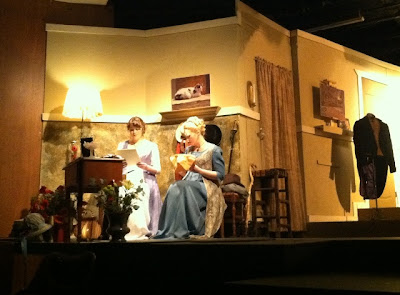 The adaptation strayed from the novel a bit.  For example, in the photo immediately above, the girl on the left is Jane Austen; she sits there taking notes on what is happening, actually writing the story as it is acted out. 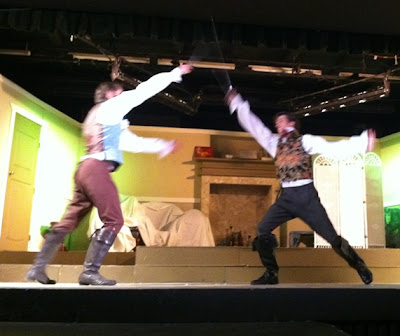 There was even a sword fight between Willoughby and Colonel Brandon!  I was happy about that, for my husband's sake.

I enjoyed it IMMENSELY!  (I do apologize for the dark/blurry photos; it's not easy to get good pictures in dark, romantic restaurants, or playhouses!)

What did you do this weekend?
family Jane Austen thrift store finds

Thistle Cove Farm said…
Happy Birthday to your husband!
Merry Christmas to you and yours
December 5, 2011 at 3:08 PM

Dee in N.H. said…
Happy Birthday to your sweet hubby! Looks like/sounds like a really fun day. For some reason I'm hungry now!
December 5, 2011 at 3:25 PM

LOVE the Mr. and Mrs. Santa! Too stinkin' cute!

I have been off on another adventure so I have to catch up on what you have been doing....off to read more!

Kathy said…
Happy birthday to your husband. It sounds like a lovely date!
I am surprised that woman could be at the sale and watch as all her things went to new homes. Maybe that is part of "the cure" or the proof that the cure took or maybe she was just counting all the money she made to buy new stuff - yikes!
December 5, 2011 at 10:13 PM

Unknown said…
#1 - the fact that you got your husband to sit through anything Jane Austen tells me he is a great man....I've have given up on that as being "girly" time...#2 I have been looking for a Santa and Mrs.Claus we had like that when I was a kid hoping to find one at a yard sale or Etsy, so funny to see you post the same ones. Isn't it amazing how you can find common ground on little funny things like that with people. Hoarders keeps me cleaning and getting rid of stuff every time i watch it!
December 6, 2011 at 6:21 AM

Marion said…
Happy Birthday to your hunky hubby! What a man. (My hubby loves Jane Austen, too.)

I read a cute sign at Pinterest that said, "You are only one shitload of stuff away from being on Hoarders." I had to laugh and look around my house. My weakness is books, of course, which are everywhere. Glad you got some good bargains!! xo
December 6, 2011 at 8:32 AM

Linda Sue said…
HOARDERS- love that program only so that it keeps me honest and I always feel compelled to clean after watching it!
Your Dennis is such a good sport!
Happy Birthday!
December 6, 2011 at 11:14 AM

Jessica Rodarte said…
Great finds!
I do enjoy a good Hoarders episode, so I hope to spy you on the next one.
What a great date! So nice that they included a sword fight for the men in the audience! *chuckle!*
December 6, 2011 at 3:30 PM

Tami Hacker said…
Looks like your Christmas decorating is off to a wonderful start...hope you enjoy adding more... you are so creative!

Happy Belated Birthday to Dennis. What an awesome hubby to share such a lovely dinner and a Jane Austen play!!