- December 03, 2011
We had another really fun swap on my other blog, Button Floozies.  It was the Christmas Ornament Swap; we had to make ornaments that were decorated in some way with buttons, and then swap in groups of four.  It was a quick turnaround, with only 2 weeks from the close of the swap to the day they needed to be mailed, but we still had 32 people participating! I know my group has received them, so I'm going to show you mine! 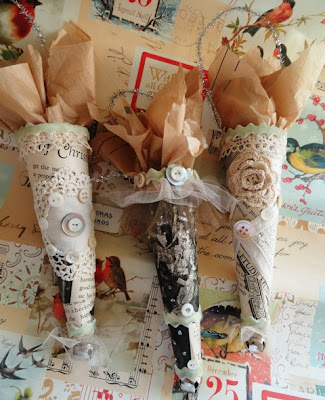 I decided to make tussie-mussie style, decorated cones.  I used some of the very oldest ephemera pages I had; two of the pages even had a Christmas theme! 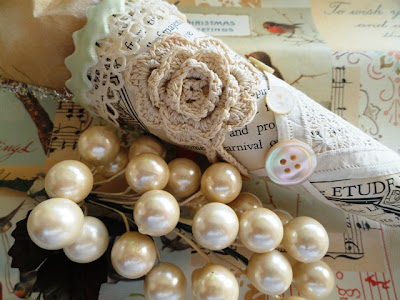 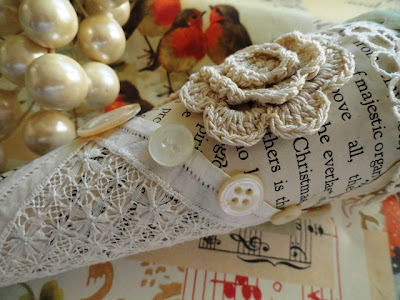 All of them were embellished with mother of pearl buttons.  This one also had a vintage square doily. 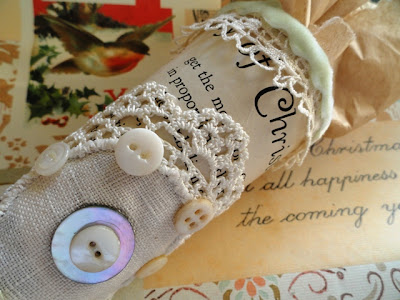 This one had a round linen and crochet vintage doily.  I embellished all of them with some new, velvet rick rack in a soft moss green color that I purchased from Linda; it wasn't until later that I realized that she was one of my swap partners, so she was going to see how I'd used my purchase!  How funny is that?! 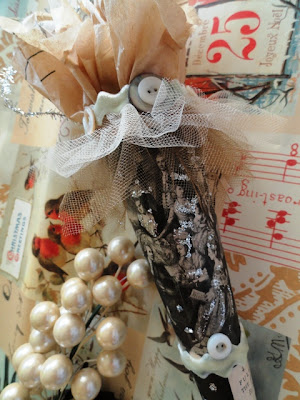 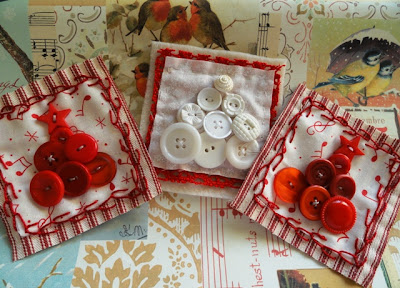 I also sewed some little button trees on a square to go along with the ornaments; these inchies can become ornaments themselves with a bit of string to hang, or, they can be incorporated into a quilt, sewn on an apron or tote bag, or glued to the front of a journal. 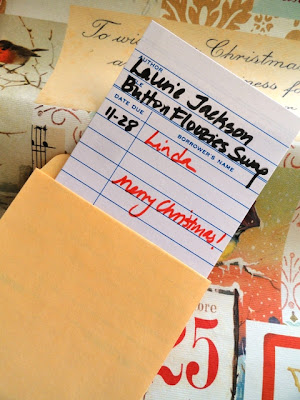 I used little library cards and envelopes as cards/enclosures for everyone!  AND, here are the ornaments I received in return: 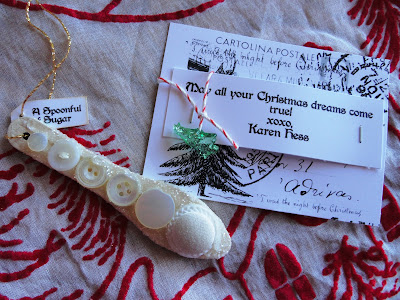 From Karen: A spoonful of sugar!  She used those white and mother of pearl buttons that I love so much, and lots of sparkle!  And just look at that little tree hanging from the twine on the card she included! 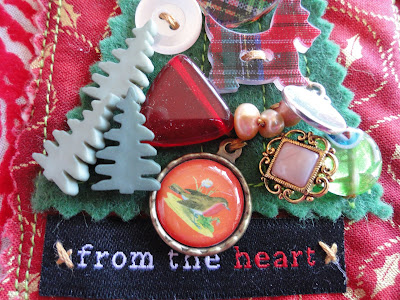 From Mary Helen: a sweetly decorated Christmas tree with a large variety of buttons, and some beads/charms, too! 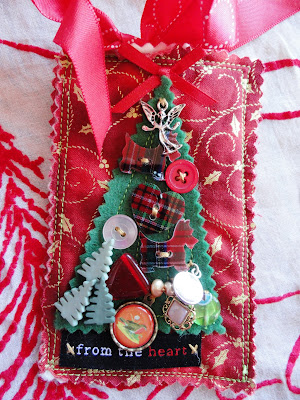 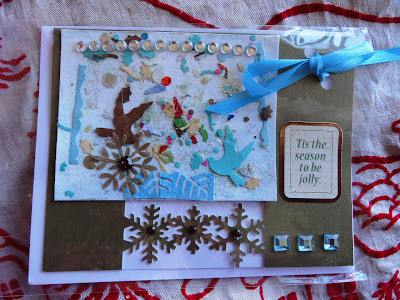 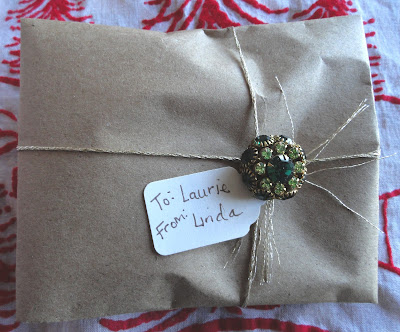 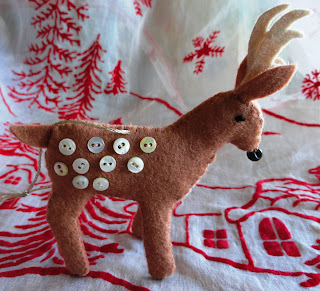 and inside, the world's cutest deer with mother-of-pearl button spots!  I adore this! 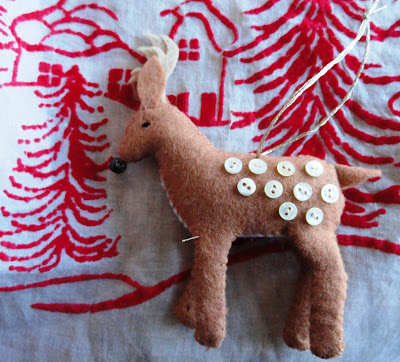 I participated in a second ornament swap group, too; I will show you those next!  Whee!  Christmas fun!
button floozies buttons Christmas swaps

Sherry said…
Everything here is just button beautiful Laurie!
December 3, 2011 at 11:04 AM

Marion said…
I guess that snow has you being creative. I'm really impressed. (I thought I was doing good to make 3 homemade Christmas cards yesterday. LOL!) Beautiful work, Laurie. xo
December 3, 2011 at 1:16 PM

Unknown said…
Laurie,
The cones are beautiful,lucky swap partners.
Like what you received pretty well, too.
Michele
December 3, 2011 at 1:57 PM

Cindy Adkins said…
Beautiful! Both the ones you made and the ones you received! I'm visiting from Button Floozies and your newest follower.
Cindy
December 3, 2011 at 6:08 PM

Ann said…
Your Christmas cones are gorgeous! And, you received some special ornaments in return. Thanks for hosting. This was great fun!
December 3, 2011 at 8:26 PM

Kathy said…
Your tussie mussie cones are beautiful and I love that little deer, too. Great swap!
December 3, 2011 at 9:19 PM

Anonymous said…
They are all so stunning! I want to try to make cones one day. I say that every year and never have. Maybe this year I will try to squeeze it in. ;-) Have a beautiful week, my friend.
December 4, 2011 at 11:33 AM

WW said…
I love the vintage elements in your ornaments, I'm always trying to use vintage items in things I make.

South City Hues said…
Those tart pan ornaments are fabulous. They are all so good it is would be hard to pick favorite.
December 5, 2011 at 6:16 PM

The Junque Seeker said…
Love your tussie mussies and your inchies! You received wonderful things in return, too. I truly enjoyed this swap.
December 6, 2011 at 12:24 AM

Bunty said…
Beautiful ornaments Laurie - I wish I had put more effort into mine now!