- April 11, 2010
I entered a competitive tray on Friday at the Colorado State Button Show.  It was a real experience for me, a newbie to the club and to the officialness that is button classification.  In a nutshell, here's what I had to do: assemble 24 buttons of medium and large size (10 large, 10 medium, 4 free choice) that depicted items within the National Button Society's classifications 17-20, which included animals, plant life, and other assorted, specific categories such as sports, music, etc.  The best assortment would win one of 3 prizes, and to have a winning assortment meant you had to have a wide variety of materials, decorative finishes, and embellishments on your buttons. 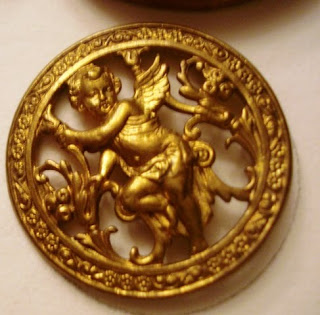 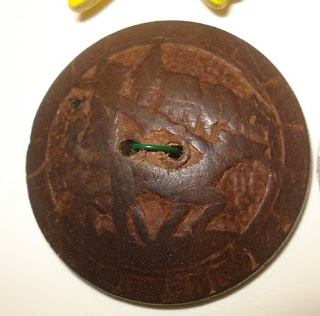 Dog being walked by man, wood 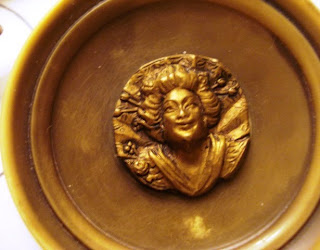 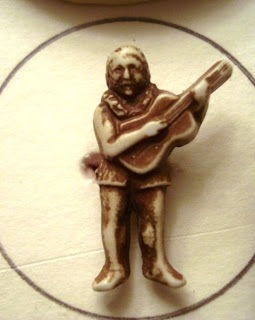 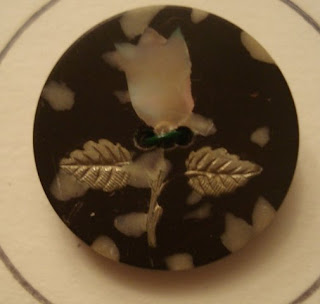 Horn with Mother of Pearl and Steel inlay 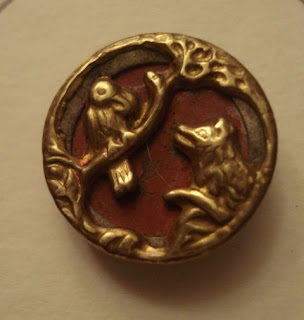 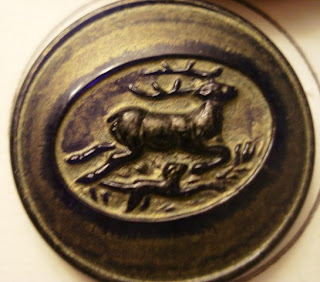 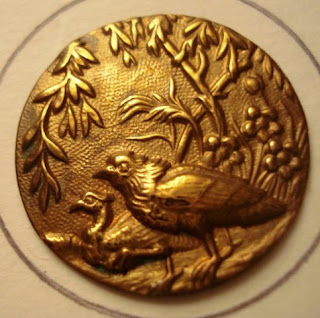 Grouse and chick, metal (copper, I think)
There is a very specific way you have to arrange the buttons on a board of a specific size, labeled in a particular way, and then which then has to be inserted into a specific kind of plastic sleeve.  I had attended a workshop on how to prepare these boards, and, I had contact with ladies from different button clubs who had offered all their help.  I had the resources to get it right.  I was up very late the night before the judging making sure it was correctly labeled. 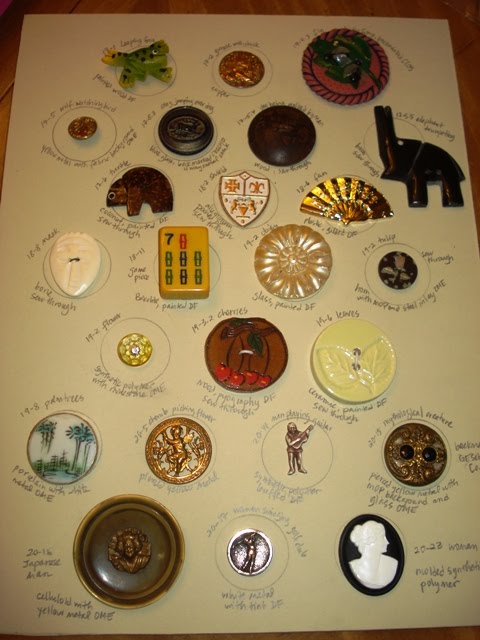 I hated the way the tray ended up looking, with all the writing on it -- it just looked messy to me.  Also, there was such a variety of subject matter, I thought it looked disorganized.  I probably should have done a different competition (there were 25 to choose from) where there was one unified color or theme.

So, early Friday morning I drove to Denver to drop off the tray and, as I'd gone all that way, offered to stay and volunteer if they needed any extra help with the judging. 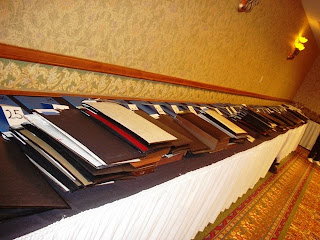 The stacks of trays awaiting judging 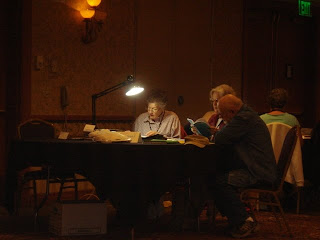 They did, so I had the privilege to help out with distributing trays, counting things, recording scores, and otherwise drinking in the studious atmosphere as the judges pored over the trays.  I also got to help judge one tray, by acting as a clerk with an experienced judge.  It was a fantastic learning experience!

But...it all ended badly for me.  I found out Saturday morning that my tray had been disqualified.  In all my zeal to collect a variety of buttons, I strayed from the rules and included two buttons that were a smidgen smaller than what they call "medium" (they measure all of them.)  It was such a rookie mistake!  I was crushed. 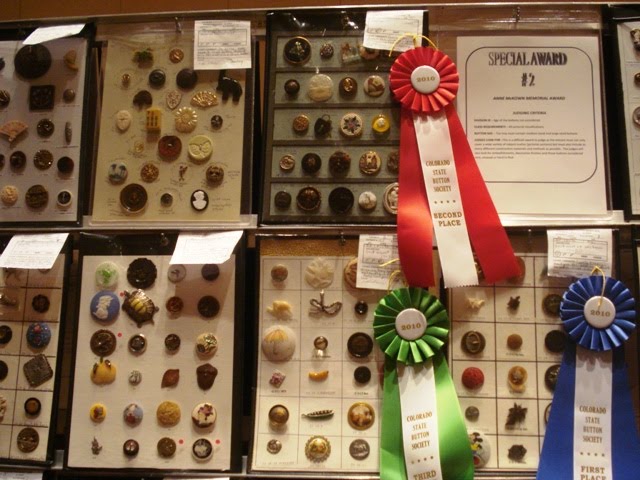 There's my tray, above, second from the left in the photo, and the three winning trays.  Do you see the little red dots on the tray below mine?  Those are called "measles" -- the dot shows which buttons were disqualified for not meeting criteria.  When your tray is disqualified, then, it's called "getting measled."  Our trays remain up there at the show through today and then a friend from the Colorado Springs club is going to collect mine and bring it home for me, as I didn't attend today (Sunday.)

I need to take some photos, and then tomorrow I'll post the buttons I purchased at the show -- stay tuned!
buttons

Sherrie said…
I am saddened that you got disqualified. Truly a rookie mistake, but only because you are a newbie. So a lesson is learned, you will go forward, and start winning up a storm. I personally was drooling over your buttons. All gorgeous! Have a great day.
April 11, 2010 at 8:47 AM

Bunty said…
My goodness - so many rules for judging buttons! Who would have believed it could be so tricky? I'm sorry your tray didn't make it but I'm sure this was a huge learning experience for you and you will do much better next time. It must be great to see so many diverse buttons but not so great if you can't take them home with you!

Have a great week Laurie.

Angela said…
What an amazing assortment of buttons! Sorry to hear you were measled, but I'm sure you will do better next time! And be able to laugh about it in the future! :o)
April 11, 2010 at 3:13 PM

Linda Sue said…
Buttongeekology!Too bad you didn't have a new york city salute button on the tray.
April 11, 2010 at 3:38 PM