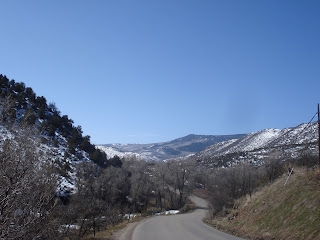 Our Spring Break trip to Glenwood Springs was lovely!  In case you're wondering how much I accomplished with all the projects I brought along, the answer is nothing: zero, zip, zilch.  I managed to finish the book I brought up with me, and that's about as energetic as I got during my down time!

But, I relaxed, soaked in the springs, took lots of photos, rummaged through antique shops...and drove my husband and son back and forth to the ski mountain.  We had some amazing meals! 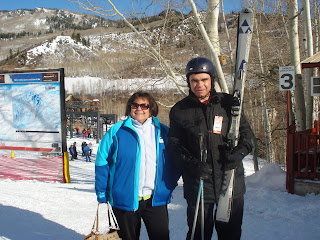 We had gorgeous weather in the 50's and 60's the whole time we were there -- warm enough to sit out by the hot springs pool and feel like it was summer!  That is a good feeling.

On their first day of skiing, my son went on his skis to look at a trail sign, slipped on a patch of solid ice in front of the sign, and hit his head on a metal shelf at the bottom of the sign.  His glasses broke, and so did his skin.  He was taken down the mountain on a sled by a first aid worker, and spent some time in the medical cabin.  Thankfully, my friend was with him (thank you, Rebecca!) Thankfully, it was just a cut.  Thankfully, he didn't need stitches.  Thankfully, it was his eyebrow and not his eye that he hit.  Thankfully, his tetanus shot was up to date. 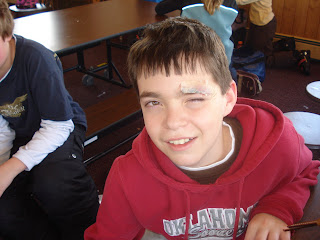 I had one of those tough mothering moments when my friend told me Ben had been hurt: I felt a little faint, and the feeling stayed with me for hours...just a low-level panicky feeling that I had to work at keeping under control.  I just couldn't believe he'd gotten hurt and I wasn't there.  I felt better after I'd seen the cut under the bandage and realized it doesn't span the whole entire eyebrow -- that's just the bandage.

Of course I realize that he is 12 years old, going on 13, and that this isn't the first nor, I'm sure, will it be the last time he'll get hurt and I won't be there...but those are rational thoughts and not feelings.

We came home yesterday, just ahead of a wicked snow storm.  It snowed all night, and we have about 4 inches, much higher in drifts.  Ben's new glasses are on order.  And the cat is sick.

Angela said…
A few years back, David and his sisters were playing tag in the driveway, and David turned around and hit his head on the BBQ grill. Got a good gash right above his eyebrow like that. Ended up with one stitch! Boy, was that scary tho! Just a mom thing, I think! :o)
Glad you had a nice trip, even with the extra (un-needed!) excitement!
March 24, 2010 at 8:53 AM