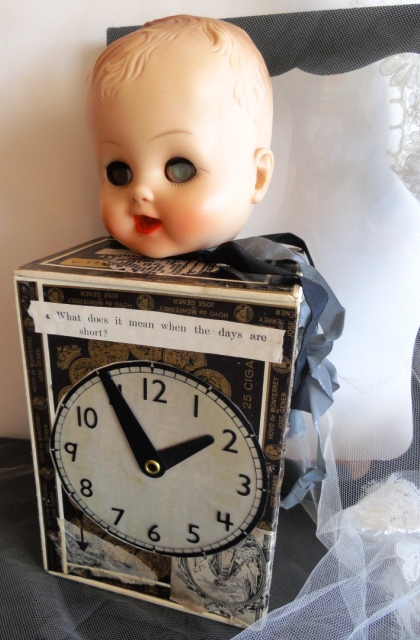 I ask you, did you ever expect me to make something like this little altered doll art piece?
Me neither. 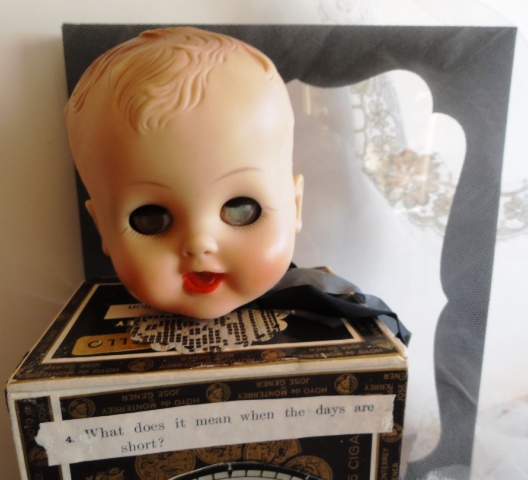 I was just so inspired by the altered dolls I saw in Kansas City last month so I started to check out dolls at thrift stores and estate sales.  When I found this one with different colored eyes that opened and closed, I knew I'd found my muse. 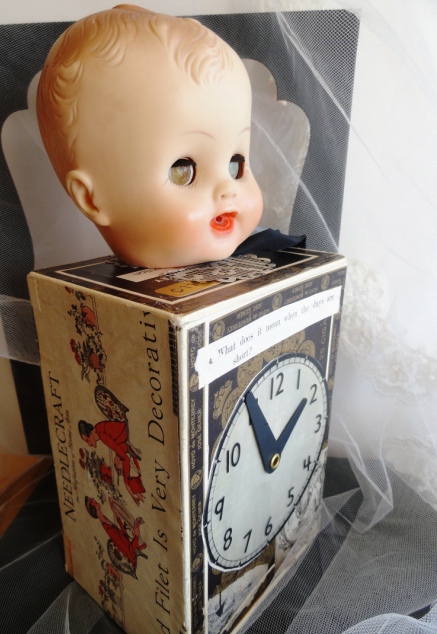 Originally, I wanted to give her arms, too.  Alas, I chose a cigar box instead of my original idea of a tin as her "body" and it was too difficult to cut holes through it.
If I do another one -- I'll give her arms. 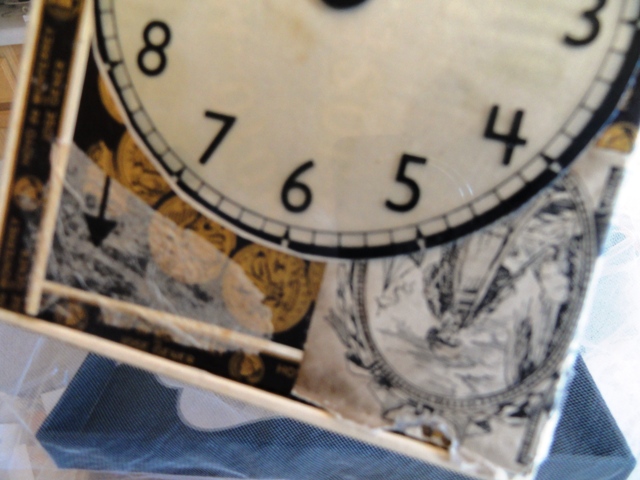 I liked the graphics that were already on the black and gold box, and I added to it. 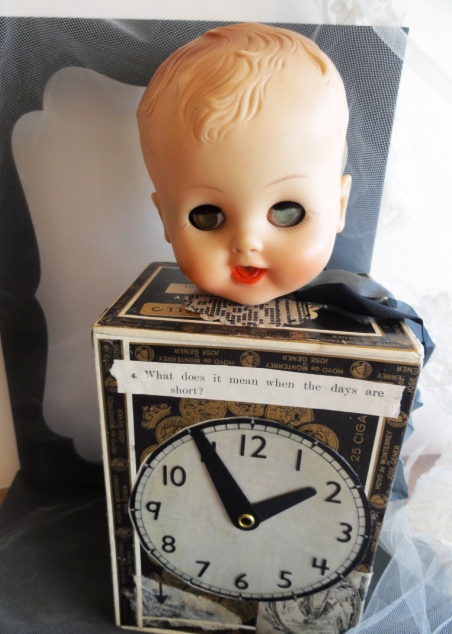 My favorite part of the whole piece is the clock on the front; it's cut from a time-telling flashcard; the hands move, too.  I was sort of playing with the concept of time/winter, can you tell? 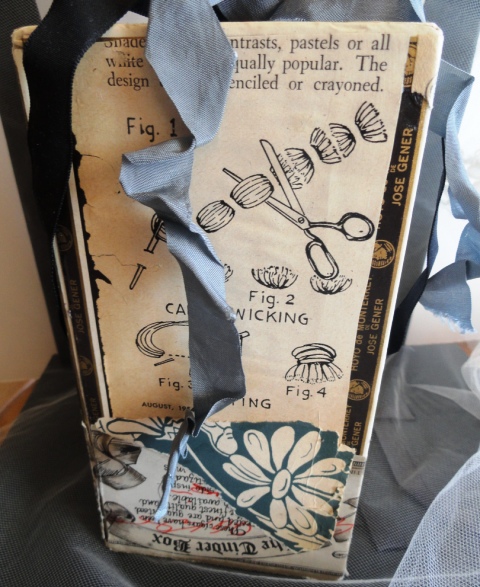 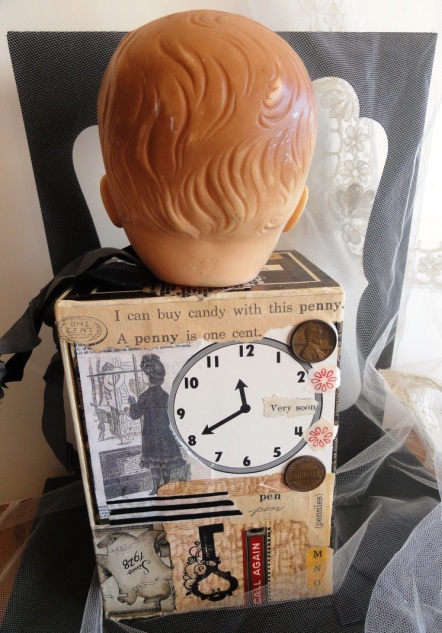 For the back, I found another time-themed flash card, and then went off on a little tangent when I found an old drawing of a girl from behind.  Since it was the BACK of the piece, I thought it would be fun to put the picture there.  Then, a phrase jumped out at me from a children's vocabulary dictionary about buying candy, that sort of went along with the girl looking in the store window... 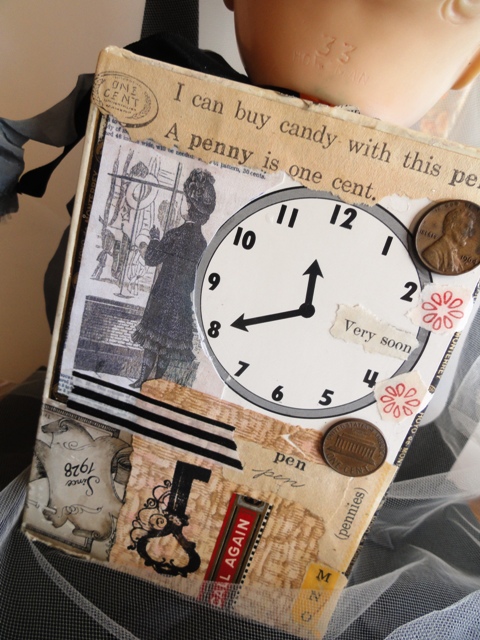 and then I remembered that I'd found these two old pennies inside one of the vintage purses I recently bought, and then there was the play on words with pen/penny and I got carried away -- can you tell? 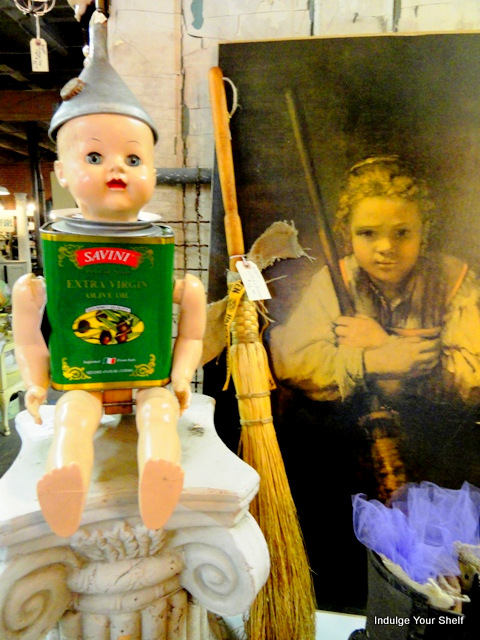 Here are some photos from Kansas of the altered dolls I saw... 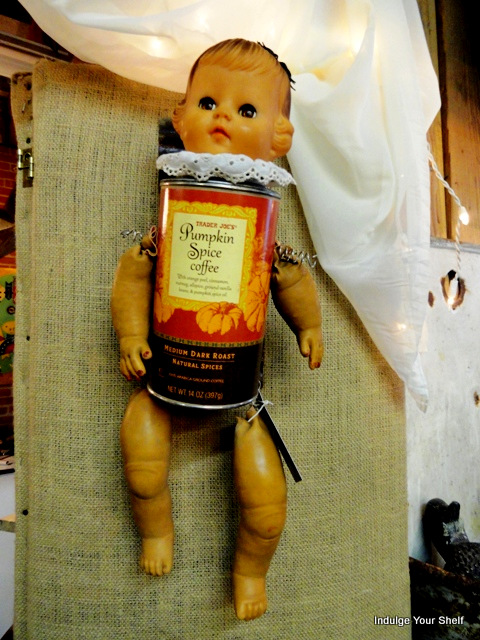 that kind of got me going on this kick! 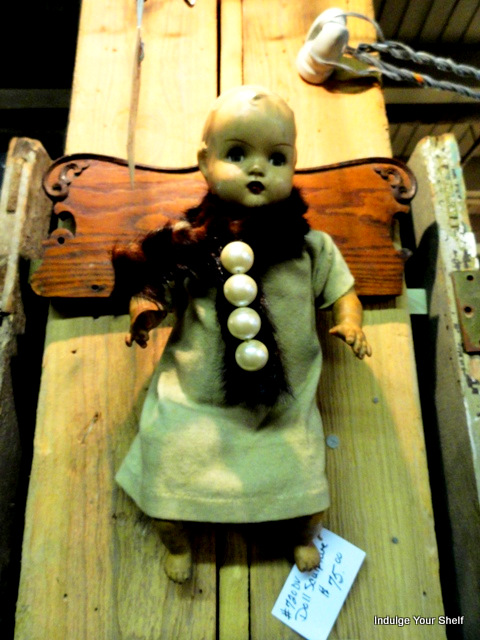 You just never know where inspiration will hit, do you?
When I bought the doll, the estate sale gals, who know me pretty well, had this to say:
"Now I really am worried about you."
!!!!
I must admit, my husband and son are also a bit perplexed.

But -- I love her!
projects vintage

Linda said…
i like your doll better than the ones from KC. her eyes are kind of freaky but seeing something in person is different than a photo. love your thinking-makes sense to me.
November 14, 2012 at 3:19 PM

Tammy said…
Well that was a fun read! You're altered doll turned out very cute! I saw it on my facebook wall first while scrolling on my phone. Couldn't wait to get to the computer tonight to find out the story!
November 14, 2012 at 6:45 PM

Unknown said…
Ihink it is wonderful! I have seen some that are just plain creepy/ugly...Yours as a sweetness to it that I really like. I would love if you came to visit my blog...I put a request on it. no pressure or obligation, I am just trying to help a child and get the word out......
November 14, 2012 at 10:48 PM

The Junque Seeker said…
She's wonderful! There's a certain creepiness to those eyes, but I love what you've done with her.
November 16, 2012 at 12:23 AM