- June 23, 2012
This past week went by so quickly...it started off with me moping around because both husband and son were out of town. 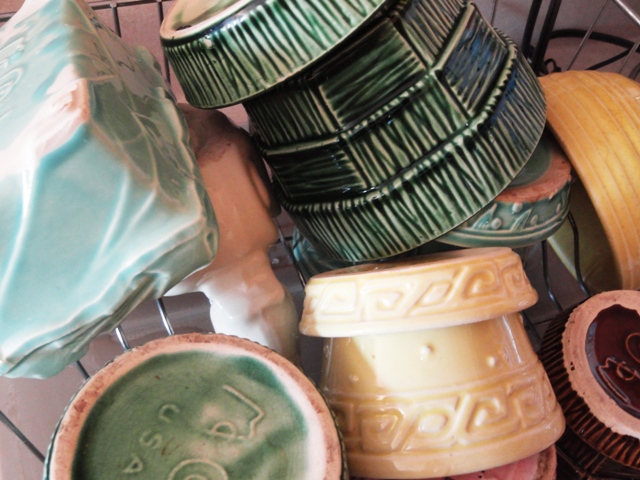 My loneliness reached new heights on the second day, as I tackled that hated chore of taking down ALL the stuff that is displayed on top of the kitchen cabinets and washing it, then putting it all back up.  (Above, some of my McCoy pottery in the drainer.) 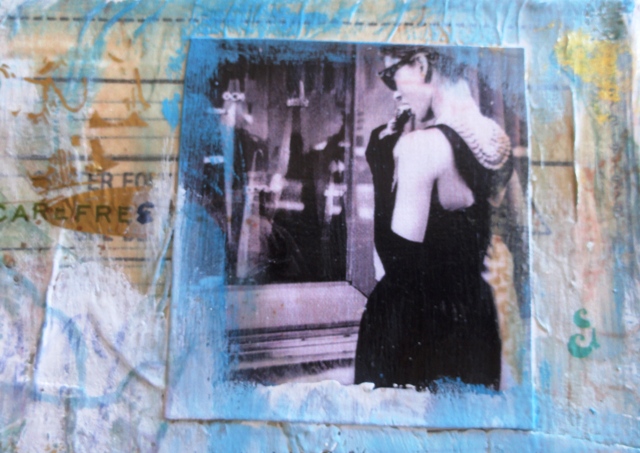 I had sent off two surprises to faraway friends, so I was waiting excitedly to hear from them when the goodies arrived! 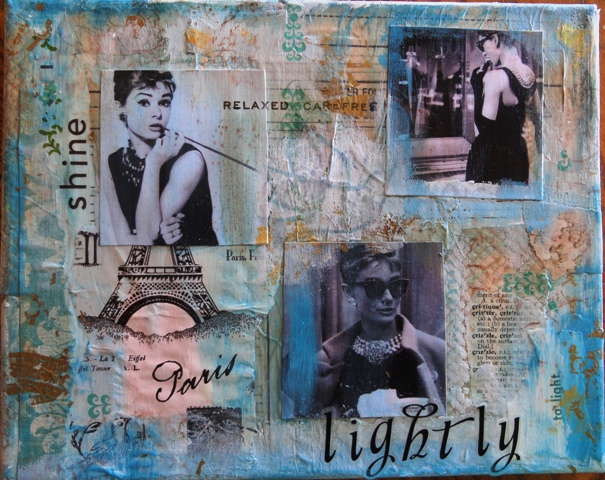 One was this canvas; I used shots of Audrey Hepburn printed onto fabric to make a Breakfast at Tiffany's collage and sent it off to my friend Linda.  I really love how it turned out, with the blues and glitzes of gold and lots of texture.  She really liked it! 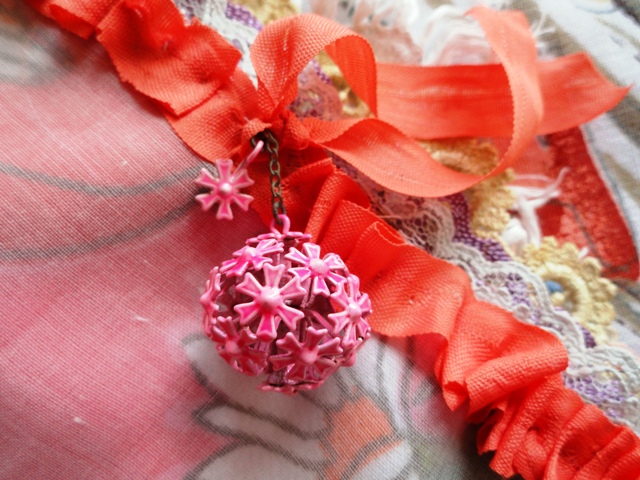 The second little surprise was a fabric book (I am obsessed); the entire time I was working on this I was thinking about my friend Terri, so in the end I decided it had to be her book! 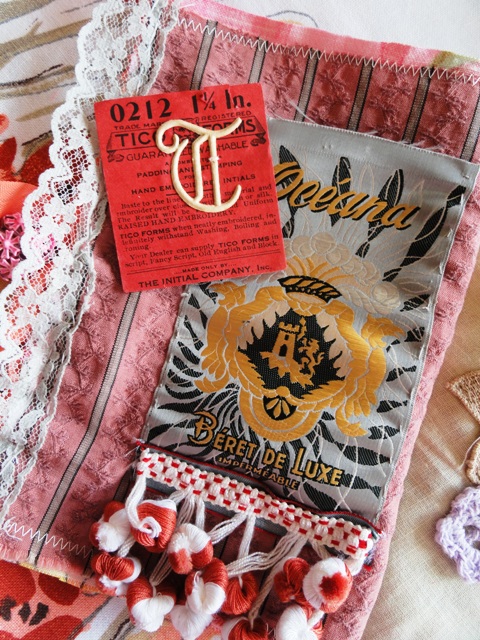 The inside of the front cover features a wonderful grey satin patch she had gifted me from her visit to French General.  I made it into a pocket, and tucked in an antique initial "T". 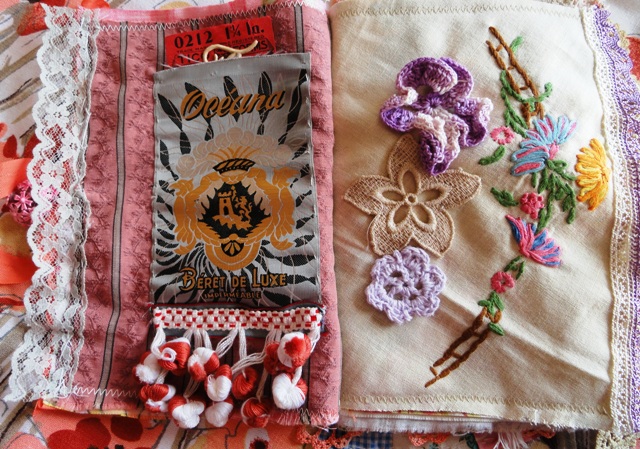 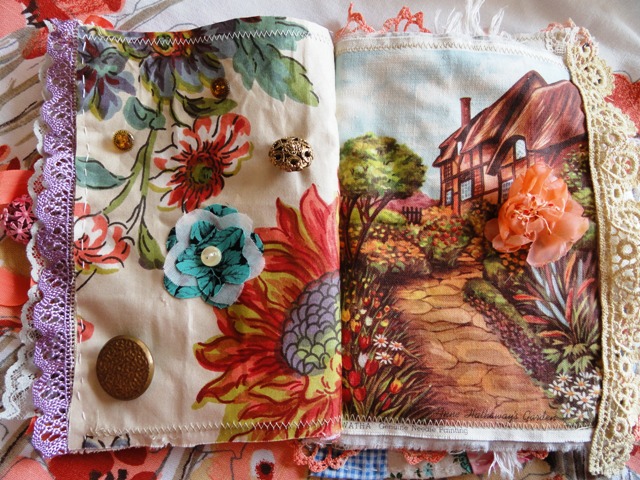 I filled the pages with lots of old fabrics and trims...no real theme besides "blush" colors... 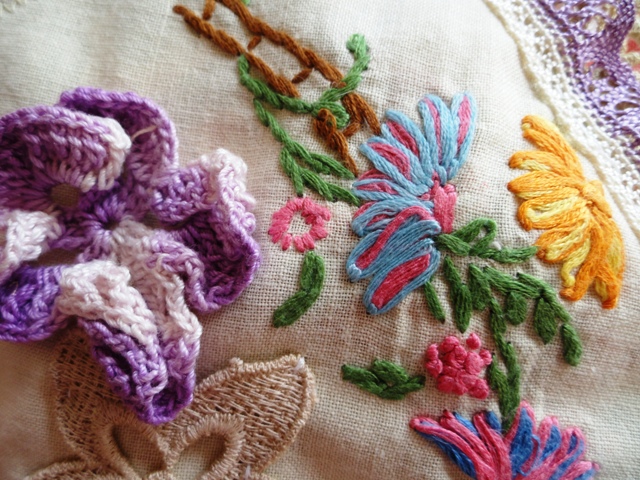 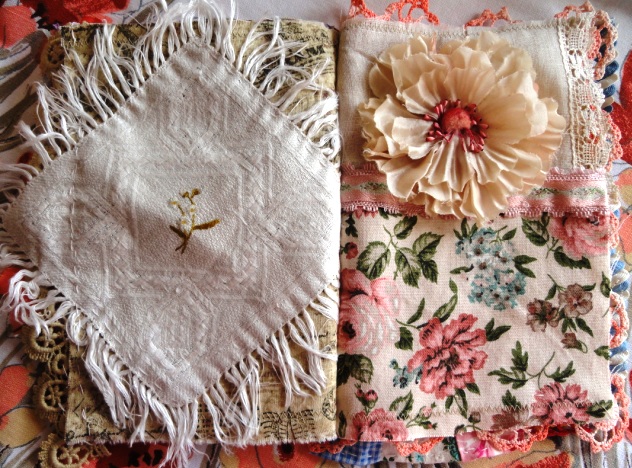 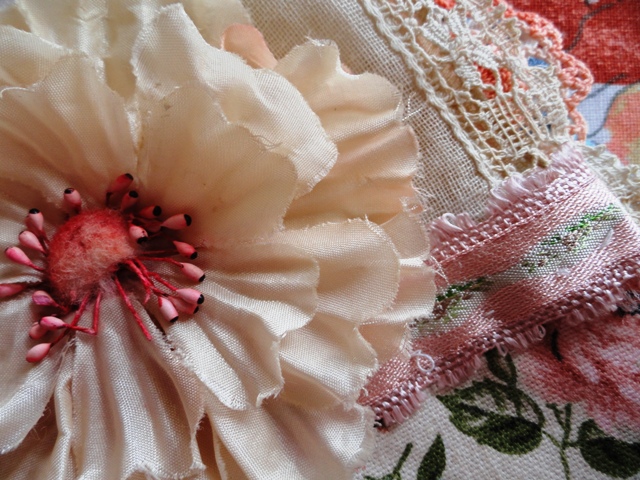 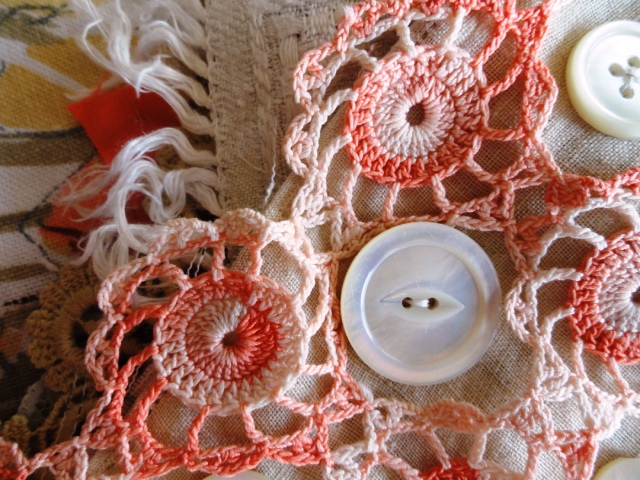 I especially had fun with this button page... 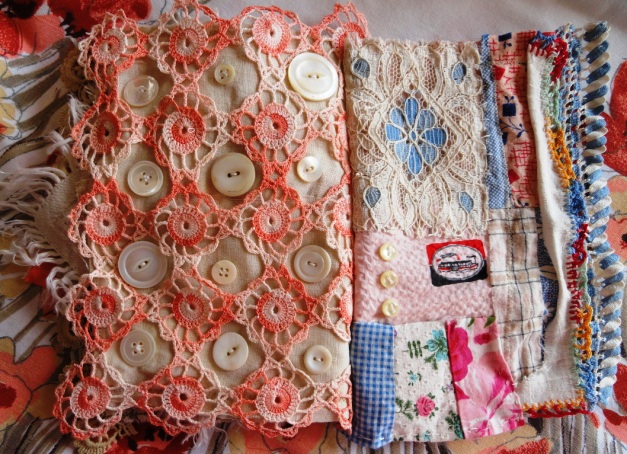 The last page was a real patchwork; it was fun to put a bunch of scraps together, and I thought it was a great contrast to the sort of geometric design on the button page. 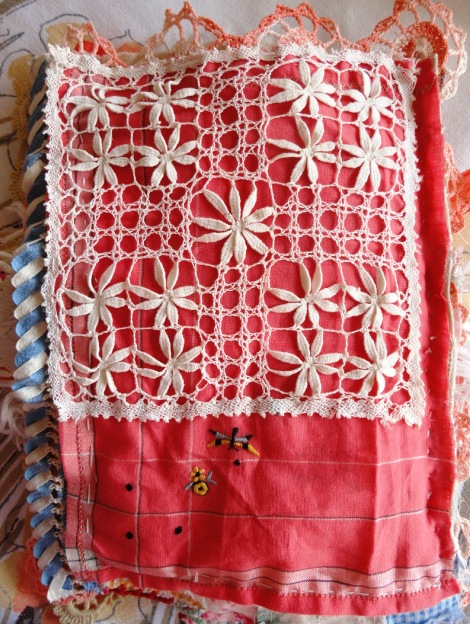 Yep, I am officially obsessed! 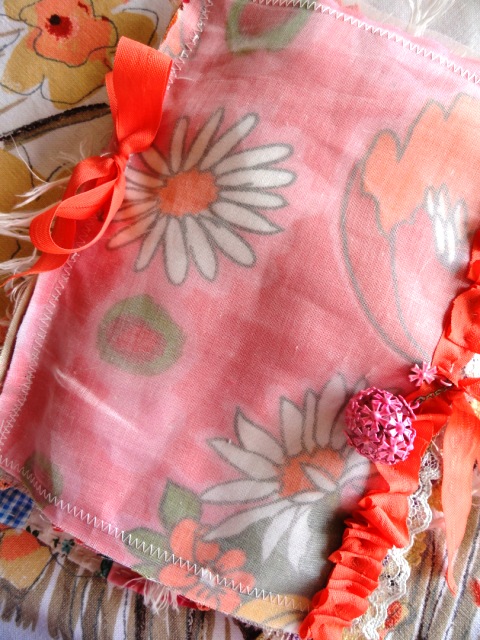 The highlight of the week was Thursday; that's when both gals received their gifts in the mail and I heard from them.  Dennis had come from his business trip the night before and took Thursday off so we could spend the day together, celebrating our anniversary.  We were married on a Friday afternoon, 21 years ago.  How time flies! 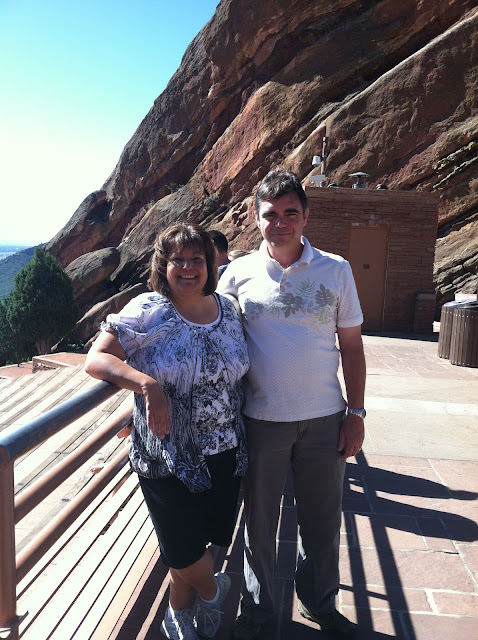 We spent the gorgeous, warm, sunny day west of Denver; first, at Red Rocks Park -- our first visit there! 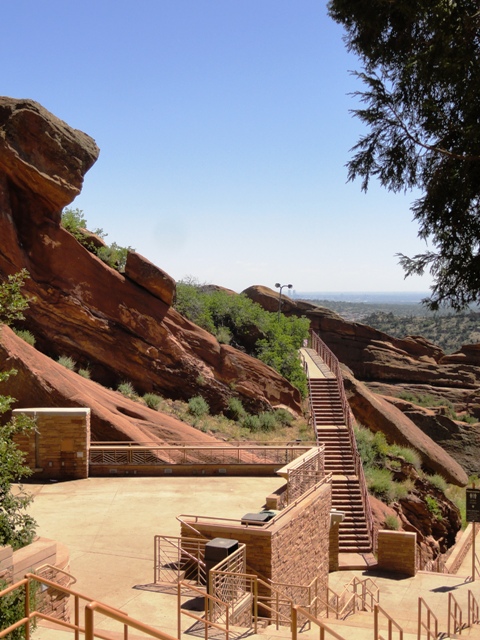 If you look under the right hanging light near the upper middle of the photo, above, you can see the Denver city skyline in the distance. 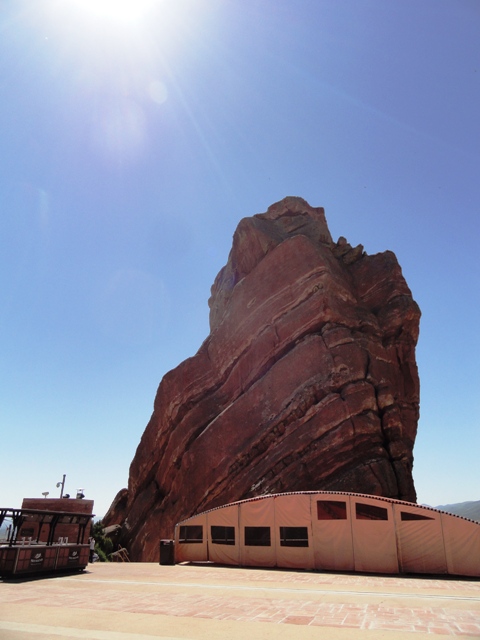 What I appreciated about the park was the way they designed all the outbuildings and practical structures to blend in with the natural surroundings. 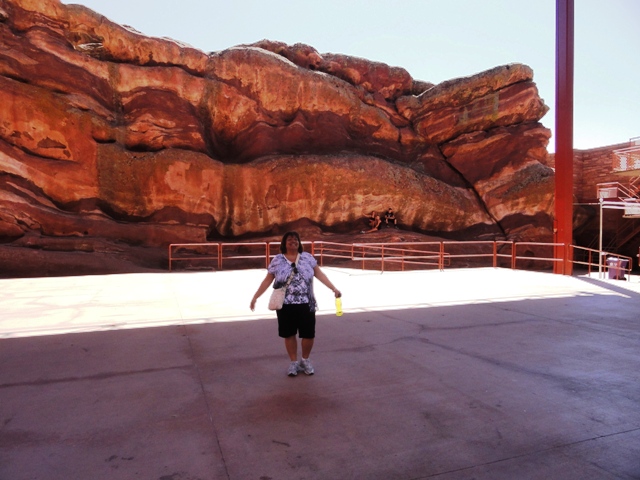 Here I am -- the only time I will ever make it on the stage in the Red Rocks Amphitheater.  After seeing the park, we are very eager to be there for a concert, someday. 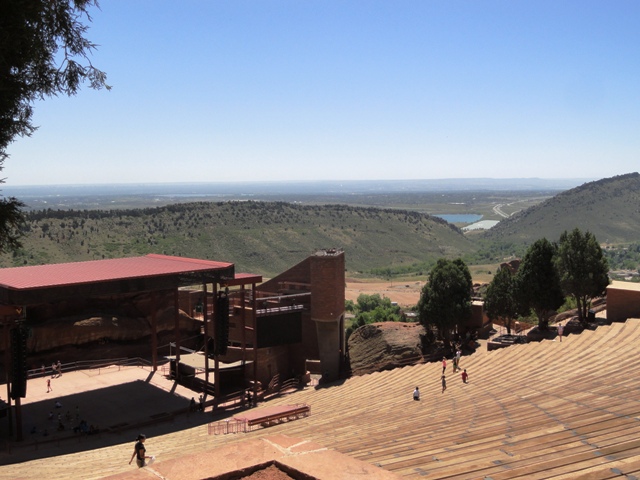 Dennis also treated me to an afternoon of antique shopping before we headed home for a really fresh, delicious take out dinner at home: shrimp salad, sourdough bread, and Chardonnay. 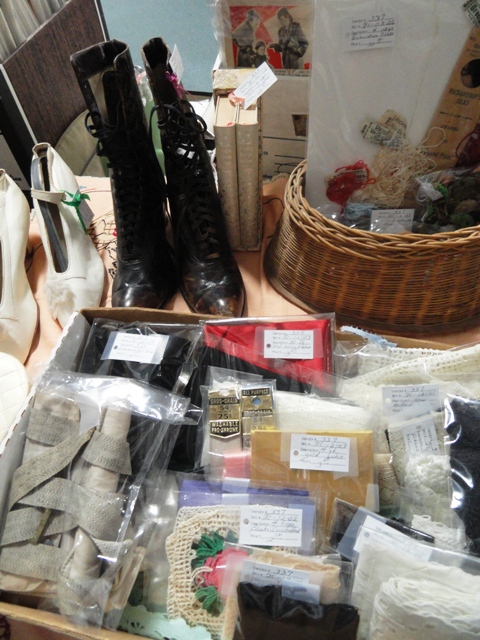 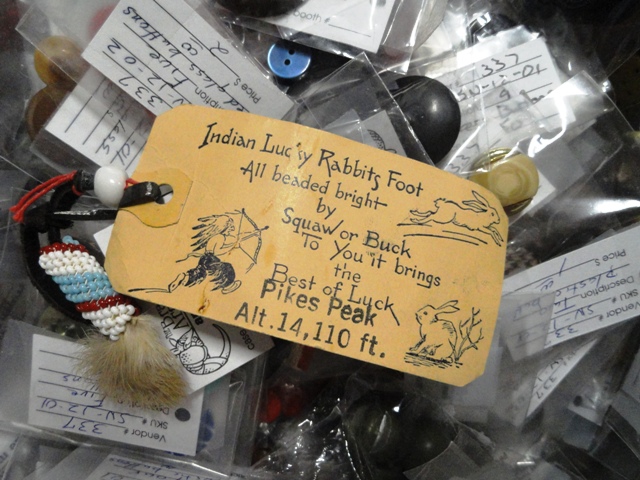 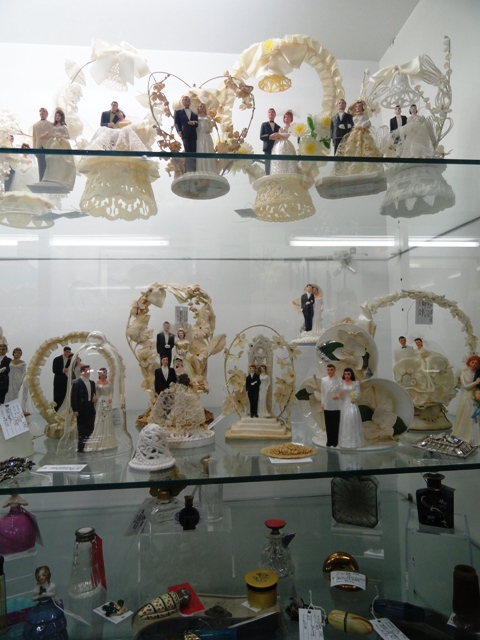 Last night, we went to Family Night at Ben's camp; it's always good to see him when he's been away all week! 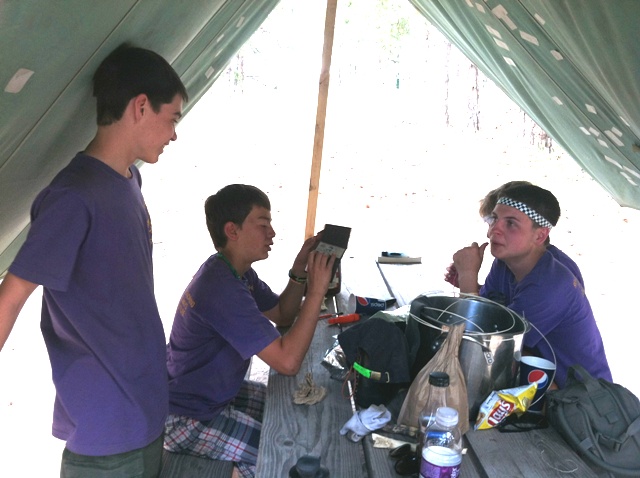 Ben is the one standing, far left.  The boys were grubby, but seemed very relaxed.  It had been a very hot, very dry week around here, but luckily Ben was camping away from where all the fires are burning; he was not at the nearby Scout camp that had to be evacuated this week.  Some of the kids from the other camp ended up at his camp, though, so there were shortages of food etc.  But nothing serious. 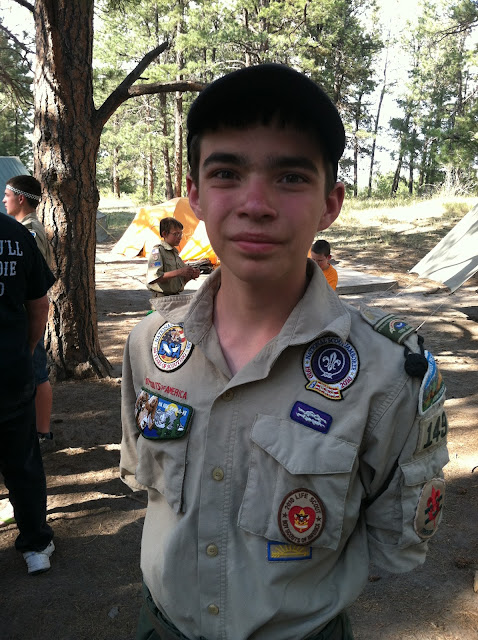 Right now I'm waiting for the phone call that says they're back and ready to be picked up.  It's been quite a week!  How was yours?
Breakfast at Tiffany's fabric book family friends textiles

Unknown said…
I am an absolute SLACKER next to you, friend! You just accomplished more in a week than I have the last month...

First, let me say the Audrey Hepburn canvas is amazing. And, not sure what adjectives are truly adequate for that fabric book---It is simply a treasure. You are so talented!

Kathy said…
Your fabric book is gorgeous - as always!! I'm glad you got to have the fun outings after torturing yourself with the kitchen cleaning. I have a shelf all the way around my dining room that holds my large collection of vintage canning jars. Cleaning it is a NIGHTMARE. Bah.
June 23, 2012 at 11:21 AM

autena said…
Yep, my hubby is away this week too and I am actually kind of relaxed and doing my own thing here. I'll be ready for his return next week, for sure. Love, love, love that fabric book.
June 23, 2012 at 12:02 PM

The Junque Seeker said…
I am so lucky to have a wonderful friend like you, and will treasure this beautiful book forever! I know the recipient of the canvas feels the same way.

A concert in that amphitheatre would be awesome! Glad your week turned out well and that you had a nice anniversary.
June 23, 2012 at 1:29 PM

Lisa said…
Happy Anniversary sweet friend! Looks like some fun you've been having. :)
I'm sure Terri *loved* her book. You do such a beautiful job on those.
Ohhh - Breakfast at Tiffany's - don't get tired of the theme before we get to our books. :)
Have a great weekend and I hope the fires stay FAR away.
June 23, 2012 at 4:32 PM

Linda said…
I adore the fabric book, what a beautiful book! I also liked the button page, the doily and buttons look great togethere but feel I got the best of the deal. For now Holly is hanging in my bedroom. What a great piece of art-lucky me.
June 23, 2012 at 6:10 PM

Thistle Cove Farm said…
You are SO creative! I could spend a LOT of time wandering through your blog, looking at the textile art. It's all beautiful!
I should stop now but...being the dimwit I happen to be...there's a piano player named John Tedishi but that spelling might be wrong. Anyway, he did a concert at Red Rock and it was televised via PBS...FABULOUS! I'd love to see a concert there.
There's a restaurant overlooking Denver, they specialize in wild game. I've eaten there and they had great food!
June 23, 2012 at 6:15 PM

Something Special said…
I love the little fabric book that you sent to Terri, and I saw it on her blog too. Looks like you are having a summer so far. That Red Rocks would be fun to go to a concert there for sure. Hugs
June 24, 2012 at 8:42 PM

Louise@ElsieMayandBertha said…
Lovely fabric book, I must have a go at making one myself. I need to find myself a swap partner for this kind of thing.
Looked like there was some lovely antiques to pick up.
June 27, 2012 at 1:18 AM

Lydia said…
Glad to hear you are all safe. Have been thinking about you and the fires. Pray you will be able to stay put, and that it will rain.

Wendy said…
Your collage and fabric book are just beautiful! What lovely and thoughtful gifts for your friends.
July 4, 2012 at 10:04 AM