Visiting the US Holocaust Memorial Museum

- August 24, 2010
Ever since I learned it had opened in 1993, I have wanted to visit the United States Holocaust Memorial Museum in Washington, DC, and was very glad to have had the chance.  The museum has been described as "a lesson on the fragility of freedom and the myth of progress", and indeed it is chilling to visit it, and to remember.

The main exhibition, called the Permanent Exhibit, is very powerful and is not recommended for children under 11 years.   The exhibit is divided into three sections, each on a different floor: Nazi Assault --1933 to 1939; The "Final Solution"-- 1940 to 1945; and  Last Chapter.  It takes 2-3 hours to go through the entire exhibit.  During those hours, I hardly heard any of my fellow museum-goers speak out loud.  It struck me that we passed through the exhibits, it was as if we were all paying tribute, and our silence was a sign of respect.

Upon entering the exhibit, you are given a small pamphlet; it is labeled "Identification Card".  Inside is the story of a real person who lived through the Holocaust.  You are instructed to read the first page of the pamphlet with the person's story on it, and turn the page only as you move from one exhibition room to the other.  My card was Rachel Lee Galperin, from Vilna, Poland.  You can read her story in the Museum's online encyclopedia, here.  Dennis got a 2 year old little boy on his ID card.  By the end of the exhibits, we learned that both of the people on our cards had died as a result of their persecution during the war.


This exhibit, called Tower of Faces, made a huge impression on me.  Each photo showed happy, wonderful images of all the normal things in life: graduations, picnics, holidays, festivals, births, weddings -- everything!

This three-story tower displays photographs from the Yaffa Eliach Shtetl Collection. Taken between 1890 and 1941 in Eishishok, a small town in what is now Lithuania, they describe a vibrant Jewish community that existed for 900 years. In 1941, an SS mobile killing squad entered the village and within two days massacred the Jewish population.

One of the special exhibits we saw was State of Deception: Power of Nazi Propaganda.  It was an extensive collection of the papers, posters, books, films, photographs, etc. that the Nazis made use of in their rise to power.  The exhibit explained how the people of Germany and other countries were bombarded with messages that furthered the evil Nazi plan.  The images were so evil; so, the only photo I felt I could show you is this happy one, above, taken as the Allied Forces liberated Europe.

I remember when I lived in Germany and spent a lot of time walking around the streets of Cologne, I was surprised at how "new" the architecture I saw all around me was; of course, I came to realize it was because so much of the city had been destroyed by bombing during the war.  It was just one of the ways I was so aware of Europe's recent history, and how at that time (in the 1980s) there were still repercussions from the war and Germany's part in it.


I remember my visit to Berlin, which was still walled at that time, and how it was as if there was a knife through the heart of that city -- it was half a city, and so obviously so.

I also remember when my "host mother" took me to be registered in the town I was living in -- something I had to do as a foreign, temporary citizen -- she vehemently instructed me not to complete the line on the paperwork that asked my religion.  I realized this was because of how the government has used the information during WWII, and how she, having been a small child during the war, must feel about it.


Visitors to the Museum pass under this gate, a cast taken from the original entrance to the Auschwitz death camp, inscribed with the ironic phrase Arbeit Macht Frei (Work Makes One Free). 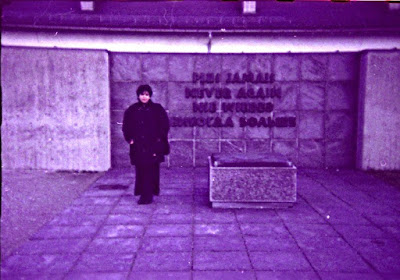 In 1987, some friends and I went to visit the concentration camp Dachau in Southern Germany.  Here I am standing next to the sign that says, in several languages, "Never Again."  (They also have that wrought iron fence that says "Arbeit Macht Frei.")  Inside, Dachau has exhibits about the Holocaust atrocities, and you are able to view even the camp's crematorium.  Outside, you can see the barracks, the yards, and a wall with bullet holes in it which was used for firing squads.  I was there on a winter day with several friends, (including Karen who I just visited in VA); all of us were profoundly moved by our visit to Dachau.  I will say to you that never in my life have I so strongly felt that the very earth I was standing on held memories and emotions.  I was overcome with pain and sadness when I stood in that place.

Some people I spoke to before going to DC told me to skip the United States Holocaust Memorial Museum.  They said it was "a real downer."  Well, it's not a cheerful subject, but it is an important one, and I wouldn't have missed it.  If you're interested, visit the museum's website.
travel

Angela said…
Everyone should have to go there, to "never forget". I don't know how anyone can deny that these things have happened. Your post brought chills to my spine. Thanks for sharing.
August 24, 2010 at 3:17 PM

Christine said…
What an emotional experience. I'm the same way--if I got to DC that will be on my must see list.

I had a friend whose parents were in seperate concentration camps. Her mother was sterilized so that she wouldn't get pregnant in the camp. It was a miracle that she got pregnant once the war was over and they moved to the US.

I just can't imagine living through this terrible time of history. It is very sobering.
August 24, 2010 at 5:43 PM

sassypackrat said…
It is on my list of three things to see if I ever get to Washington DC. My Grandmother's cousins died in a concentration camp and we as a family will never forget that.
August 24, 2010 at 6:20 PM

Cindy said…
We must never forget. Thank you for sharing this with us.