- August 11, 2010
The main reason for our trip to VA was to visit Ben at Jamboree.  We had more fun that day than I ever expected to have!  First of all, it was just so awesome to meet up with him. I was missing him more than I had thought I would.  I think I was just worrying about everything: the record-breaking heat they were experiencing where he was, the logistics of travel, the hectic schedule they were on, etc., etc.  I'm a mom, what can I say? 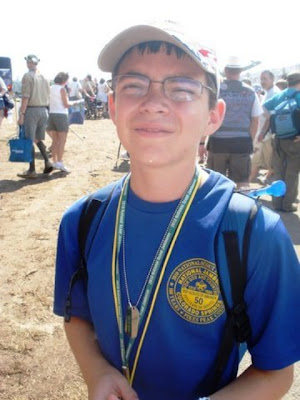 The getting there wasn't so easy, but you have to hand it to the Scouts to have it organized as well as it was.  It took us about an hour to make our way from the road to the Camp, which was at Fort AP Hill near Fredericksburg, VA.  We were in a long, slow line of cars carrying visitors that would more than double the camp's population every day. 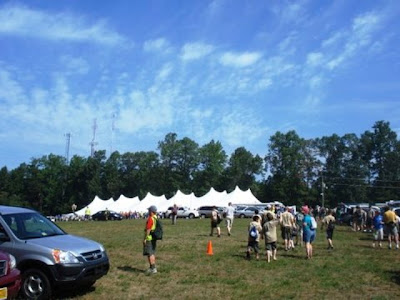 Finally we arrived at the Visitor Center -- a huge tent set up to receive all the traffic.  We were each given a small back pack which contained info about the camp and a handy map and schedule of events.  Then we found Ben, and he began to show us around. 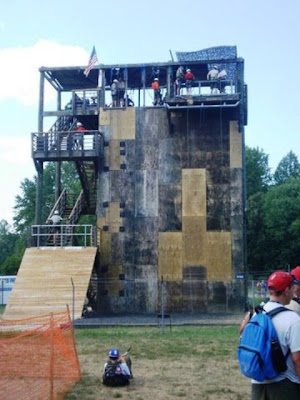 There was so much to see.  This is a repelling tower that the kids got to practice their mountaineering skills on. 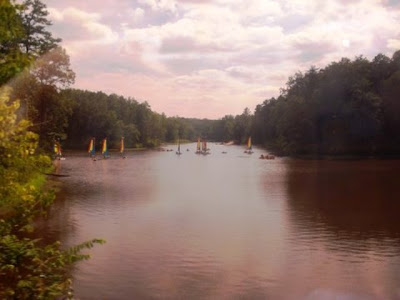 This is where the boys got to sail -- a small lake, perfect! 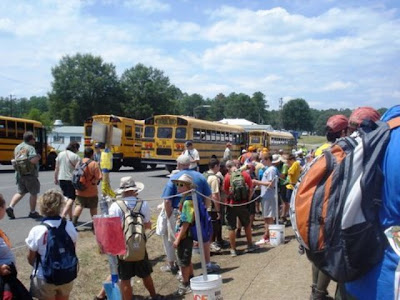 Of course, everywhere we went, there were thousands of kids traveling back and forth from the activities.  Almost all the Merit Badges were represented with an area to perform some, if not all, of the requirements.   There were historical and informational exhibits, and tons of activities such as swimming, sports, obstacle courses, free photo postcards to print and send home, a radio station run by the boys, and so much more. 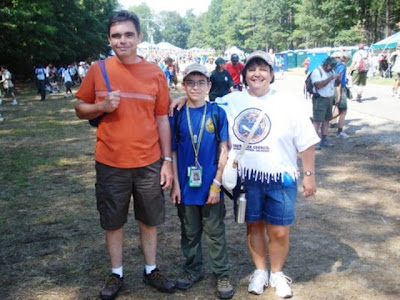 In fact, we were listening to QBSA on the long ride in, and heard them announce that thousands of kids had shown up for the 5K run at 5 a.m. that morning.  I turned to my husband and said, wistfully, "How fun!  But you know Ben didn't do that!"  But, I was wrong.  Ben said hello, and then, "Guess what?  I ran a 5K this morning!"  You could have knocked me over with a feather! 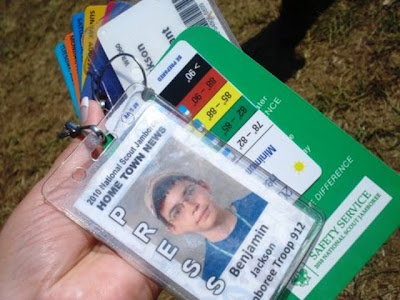 Ben was a Hometown Reporter which meant he prepared news reports to send home to our local newspaper and TV news station.  I haven't seen them in print or on TV, and am still in the dark as to whether or not they appeared.  I know he sent them, but the news outlets were not obligated to use them.  But, I am so very proud of him -- especially of the video he did for the TV news.  He wrote 3 articles, worked with volunteer journalists, and learned how to use the equipment, including the teleprompter.  What a fun experience for him! 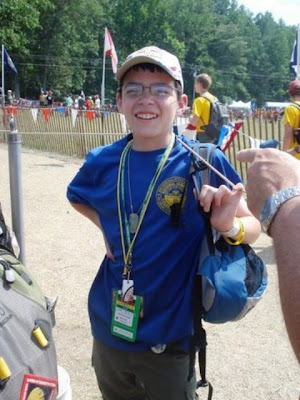 We didn't know it at that point, but later on the day we visited him we received the news that we had to sign an notarize a permission slip for him and some of the other Hometown Reporters to take a ride on a Blackhawk helicopter.  That was a pretty cool opportunity for him, and he said he really enjoyed the 45 minute ride!  I'm still waiting for those photos. 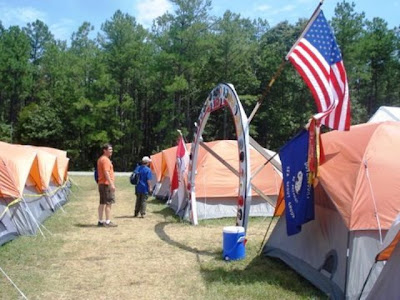 Ben's camp volunteers let him take us back to his Troop's subcamp.  We were super-impressed with how well they'd done setting up.  The Troops each created a "gateway" at their entrance. 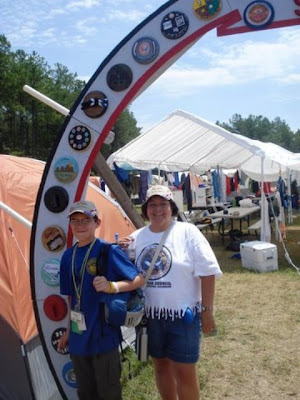 Ben's contingent's gateway was based on the TV show, "Stargate." 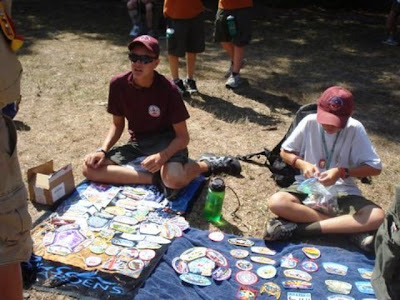 Patch trading is a really Big Deal at Jamboree.  Ben's contingent was especially popular because their patches were also based on "Stargate" -- they were #4 in popularity at the Camp!  That's pretty amazing when you realize how many thousands of Troops were there.  We were all surprised.  Ben came home with a great bunch of patches! 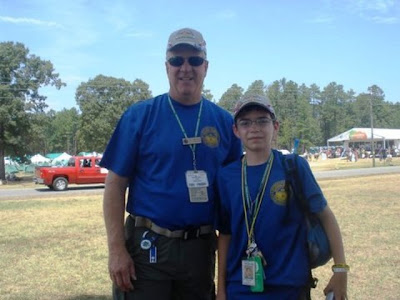 Here's Ben with one of his Scoutmasters, Rod Enemaker.  You might have seen him on TV -- he was interviewed on Fox News on opening day when the boys were setting up camp, here (beginning at 1:22 into the video.) 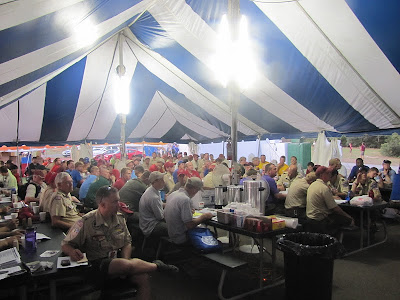 I was really pleased with the adult leadership there.  The above photo shows just the volunteers for Ben's subcamp -- and there were at least 14 subcamps!  The volunteers paid their own way and took 3 weeks off of work, most of them, to be there to serve the boys.  When they assembled Fort AP Hill, it became the 13th largest city in Virginia for those two weeks! 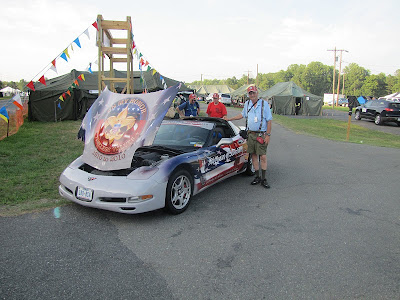 Here's a Scout race car.  Dale Earnhardt, Jr. and Jeff Gordon visited on July 29.  Sean White visited on August 3 -- I really would have loved to have seen him! 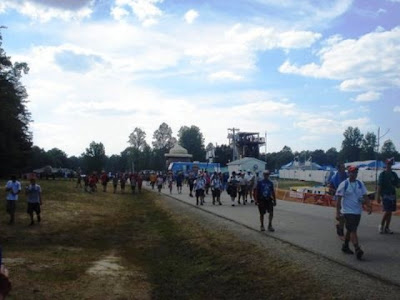 The whole camp had an atmosphere of excitement, but also of peace, somehow.  I was surrounded by thousands of teenaged boys for about 8 hours and I never heard one single cuss word, or argument, or anything but laughter and fun!  The kids were so polite to me.  It was pretty darn amazing. 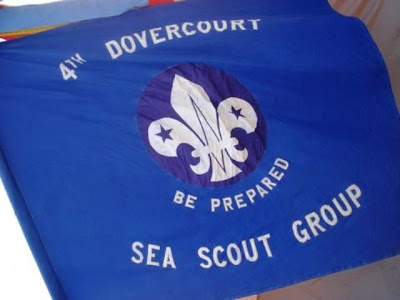 Ben's Troop was honored to host an international Troop; in this case, it was a group of Sea Scouts from England.  Ben had a great time getting to know them! 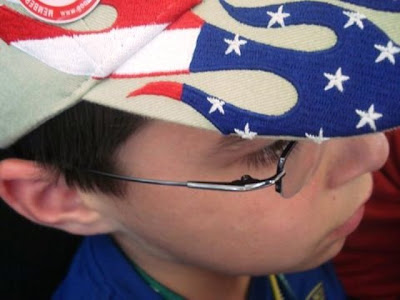 The day after we were there they held the big arena show, called Shining Light.  It was simulcast live online, so we caught most of it after dinner.  I love this video of boys walking to the show!

Switchfoot was the headlining act, and Dirty Jobs guy Michael Rowe - an Eagle Scout - gave a super-inspiring speech about stepping out of your comfort zone.  The President didn't attend, which was a shame and a break with tradition.  He did address them via video.

Ben (and I!) stepped out of our comfort zones to take part in Jamboree, but it was so worth it.  Ben grew so much, and I don't mean taller.  Can you tell I'm proud?  I'm happy he had the chance to be a part of something like this and I know he'll remember it forever.  As will I.

Angela said…
This is all SO cool! David just read it all, too! :o) Too bad the President did't go, especially to acknowledge an anniversary year like this. Thanks so much for sharing all these pics!
August 11, 2010 at 9:59 AM

Christine said…
As I said when you told us he was going, this would be the experience of his life. I think it has sure turned out that way!!! What a great experiece for you to be able to participate even just for a day!!!