- July 28, 2010
I know I've mentioned this over the past year and a half, and it's finally arrived: my son Ben is in Virginia right now, along with about 45,000 other Boy Scouts, at the 100th Anniversary of Scouting Jamboree. 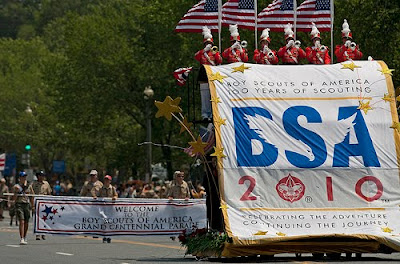 It's something he's worked hard for, from the extra meetings required as a part of a second Troop put together to represent our Pikes Peak Council... 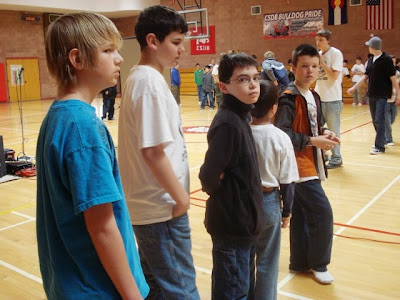 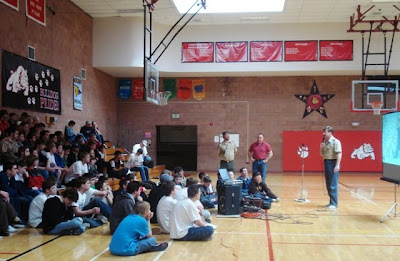 to the extra fund raisers, which included delivering phone books one frigid weekend (which took 3 miserable days!)   That's him in the back of the truck, wearing the red/white/blue jacket. 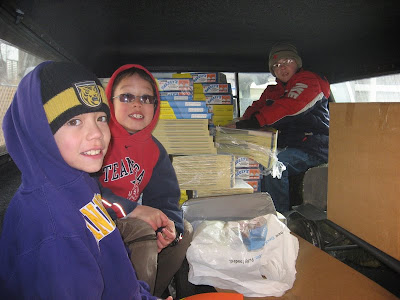 Along the way, he had to earn a certain rank - First Class - which he did and then surpassed.  He's going to Jamboree as a Star Scout. 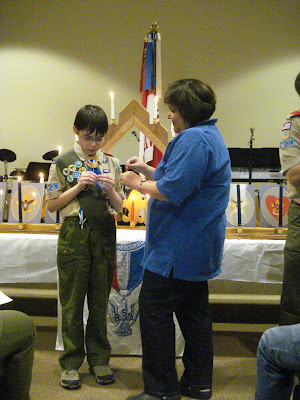 We had to get him outfitted with a ton of extra uniforms and gear: 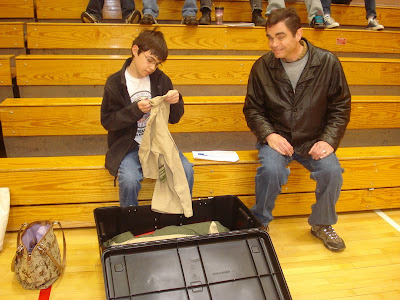 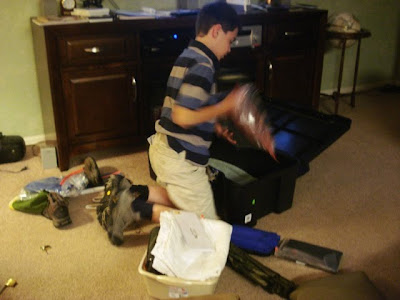 We had to pack it up so it could be trucked separately to VA a few weeks ago.  The worst part for me?  Sewing on all those patches! 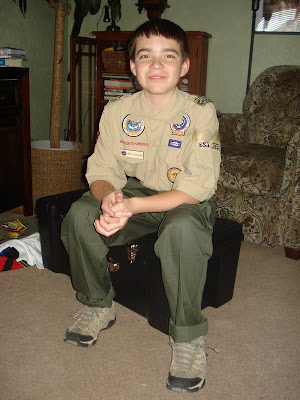 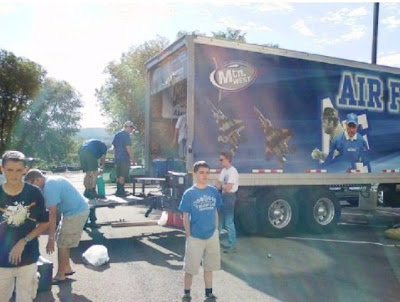 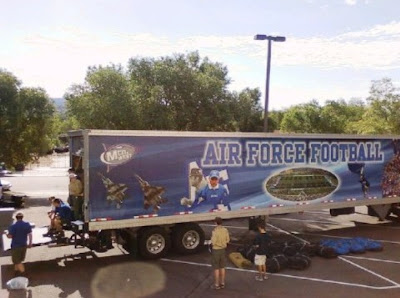 Why such a big truck?  Well, about 120 kids from this region are traveling together in 4 Troops, each with several patrols.  Ben knows one other kid from his own home Troop, whose father just happens to be working on the mini-town constructed at Fort AP Hill for the Jamboree -- everything from security to first aid to communications to building an outdoor arena. 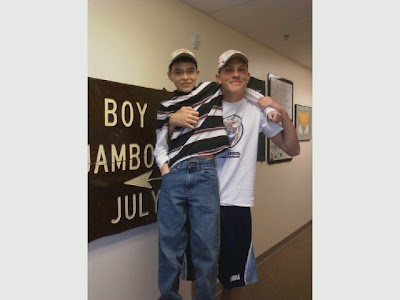 It's pretty special for the two of them, as Colorado is also celebrating their own Scouting Anniversary this year.  The other young man, Brandon, was able to achieve Eagle prior to leaving for Jamboree! 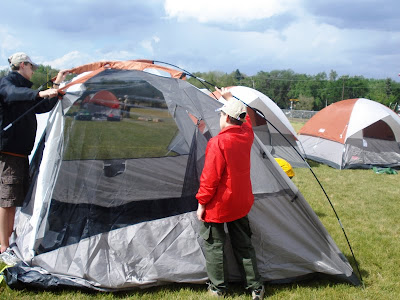 Ben's Jamboree Troop did an overnight "shakedown" last month to practice setting up their subcamp, which they had to construct this past Monday upon their 6 am arrival at Fort AP Hill. 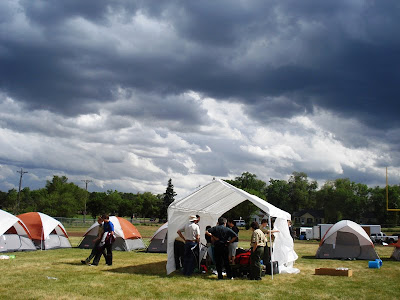 That was the weekend it rained, non stop.  Poor kids!  Then, the day finally arrived...this past Saturday... 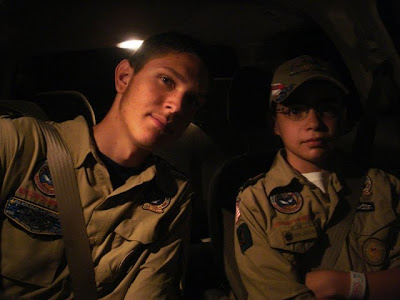 we all got up at 2 am (I hadn't slept anyway) and drove to the drop-off. 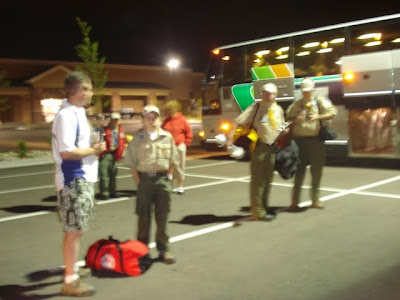 The boys loaded up on a bus and headed for the Denver airport, taking off in two separate flights to Philadelphia.  Ben and his Troop spent Saturday at  Independence Hall and then had a dinner picnic at Valley Forge.  On Sunday, they visited the Philadelphia Visitor Center to see Liberty Bell, Carpenters Hall, Congress Hall, Franklin Court, Christ Church, Betsy Ross House, Benjamin Franklin Memorial, and more.  Then they went to Gettysburg.

I'm sure they were exhausted by the time they arrived and set up camp at Fort AP Hill.  It wasn't until Tuesday morning, though, when I first got a glimpse of him, courtesy of Brandon's dad who is onsite and knew I was hoping to hear/see something: 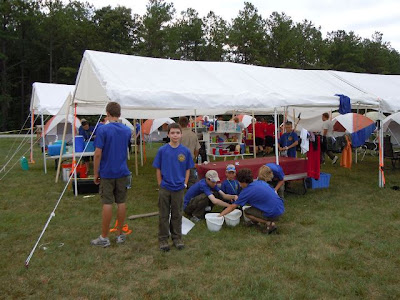 There he is -- looking tired but intact!  I gasped out loud when I saw the photo -- just so relieved to see him.  This has been harder than I expected it to be -- to have him so far away. 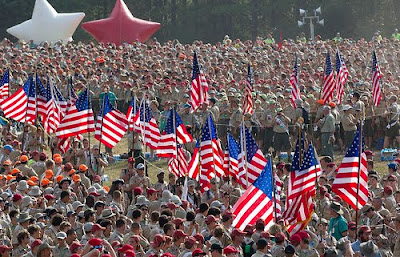 There are so many amazing things going on at Jamboree.  The photo above is from this morning's Arena show... 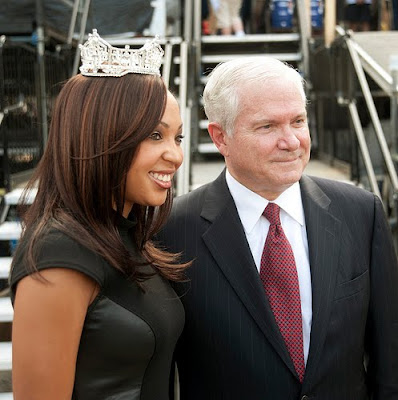 which featured Secretary of Defense Robert Gates, and Miss America.  She was quoted as saying, "You are some of the most excellent people the world will ever know."  I agree, Miss A!

I know Ben is having so much fun -- there is so much for him to see and do during the 10 days he'll be on site at the camp.  If you're interested, visit the Jamboree website or Jamboree Today on Facebook.

As you read this, Dennis and I are headed to Virginia ourselves to visit Ben at Jamboree.  I just couldn't bear not to experience it a bit myself!  We will see Ben, then spend the rest of the trip visiting antique stores, battlefields, and all the wonderful DC monuments; plus, a couple of Smithsonians, the Holocaust Museum, and Mt. Vernon.


I also get a chance to reunite with two women I spent a year in Germany with when I was 22.  That will be a blast!  It's been 23 years since I saw them (or DC) together.
I'll have limited Internet access, and if I get a chance I will be uploading photos and updates along the way!
family

Angela said…
Thanks for sharing the pics! What a once-in-a-lifetime chance for Ben! I wish David could have went!
For your part of the trip, I will be especially interested in hearing about the Holocaust Museum. My Dad was a WWII buff and was especially interested in the concentration camps. (That interest continues in me!)
July 28, 2010 at 12:49 PM

Christine said…
Wow, what an amazing experience for him. It will be one of his favorite times in his whole life.

I'm so happy that you will be able to see him and experience some of the Jamboree for yourselves. Have a great time and don't spend to much at the antique stores! *giggle*

Thoughtfully Blended Hearts said…
Congrats to your family and your son for attending this event...Boy Scouts rock!!!
July 30, 2010 at 8:56 AM

Jamie said…
Oh, you proud Mamma!!! Ben will remember this his whole life. I was a Boy Scout leader for two years and loved it. Thank you so much for your sweet support Laurie. It means so much to me. And tell yhour friend that the picture of the frog in a top hat made me giggle for hours:) Love, Jamie
August 3, 2010 at 6:57 AM