It started when I was 20 and worked in a large office.  For some reason we were having an office party and one of the games we played was to answer a bunch of questions about ourselves, such as our favorite animal.  I answered, "penguins, because they always look like they're dressed up."  Everyone in the office thought it was a hoot, I don't know why.  After that day, I began finding penguins on my desk.  Penguin candy.  Penguin book marks.  Penguin coffee cups.  A collection was born.

I finally stopped buying penguins about 10 years ago.  I gave a whole bunch away before we moved to Colorado, and brought only my favorites with me.

And now, I'm getting rid of all but a dozen or so of them.

These are the ones I'm keeping: 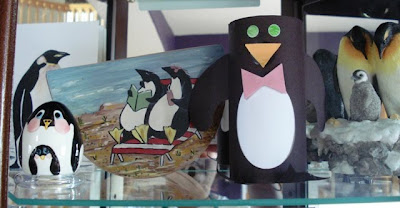 The card in the back and the box with the penguins on the beach are special to me because they were painted by my  husband's aunt.  She passed away some years ago; the box was her wedding shower gift to me because she knew how I loved penguins.  The large paper penguin was hand made by my nephew Jayce when he was about 4 years old.  The little egg with mother and baby was something Dennis bought me from a gift shop in Lake Tahoe, NV when we were dating.  The penguin parents and baby is a music box that plays, You Are My Sunshine, also a gift from Dennis when Ben was little.  It makes me smile. 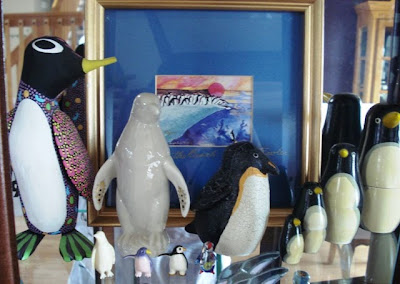 The framed picture at the back is a print by the daughter of one of the "Mutual of Omaha's Wild Kingdom" guys -- if you remember that show, you're about my age!  I bought if from her at an art and wine festival in CA.  The large "animalito" penguin is something I found in Oaxaca, Mexico, and it's probably my very favorite of all my penguins.  Hand-carved, hand  painted, colorful and very hard to find!

Next to it is a Lenox penguin; the short, squat penguin next to it is made from sail canvas and I bought it in Maine; next to that is a set of nesting penguins.  The tiny ones in front are: an antique plastic molded penguin, a tiny purple Hagen Renaker penguin, and one in black in white which is special to me because I used to have it glued to the dashboard of my first car; and then the newest: a tiny blown glass millefiori one that I bought at Disney World a few years ago. 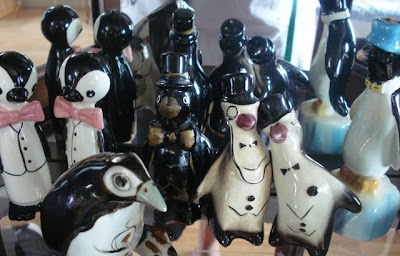 These are among my oldest: the pink bowtied penguins are salt & pepper shakers, then comes a lone penguin that's also antique; the top hatted fellows next to him are also salt & pepper shakers -- I love them because they look like they're drunk and holding each other up!  The blue accented one next to them is very unique, because he's a liquor container, still full (you can kind of see the cork in his hat.)  It's from Italy in the late '50's.  In front is another penguin I bought on another trip to Mexico.

Okay -- so maybe that's more than a dozen that I'm keeping.  But: look at all the ones I'm getting rid of: 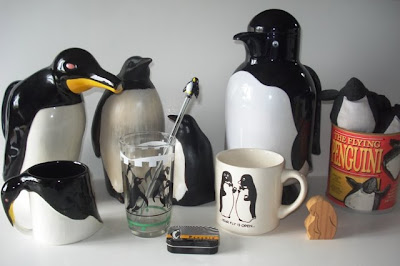 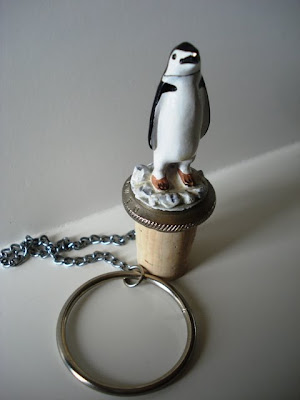 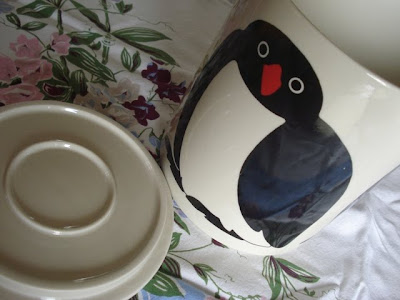 I've scheduled these on eBay beginning Sunday morning, June 26, so if you know any penguin collectors, please spread the word!  The starting price for the lot of 65 of them comes out to less than 25 cents per penguin!  The one in the last photo is a rare Taylor & Ng cookie jar in perfect condition -- he's being sold separately, also Sunday morning.
eBay love

Anonymous said…
I used to collect mice, so I guess we all have our little passions. Thanks for your comments. I am having so much fun with the mail art, send me an email with your postal address and I well send you some if you want.
June 25, 2010 at 4:14 AM

Something Special said…
That is some collection. You are the first person I have ever known to have a penquin collection, and it is so much fun. Come back for a visit and get in the giveaway I am having right now in honor of my newest grandchild, born 3 weeks ago. I think you would like it. I also am getting ready to post my Holiday magic Christmas in July swap, so check back soon. I will be posting by tomorrow.
June 27, 2010 at 8:12 PM