- July 01, 2009
What would a summer trip be without shopping in the nooks, crannies, and corners for antique finds? I love antique malls, and visited several. Here is a bit of my bounty from the well-known St. Charles Antique Mall: 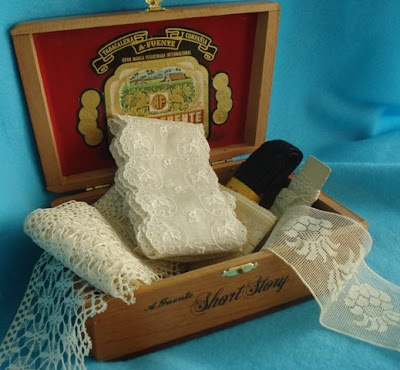 How could I resist the cigar box with the inscription on the side, "Short Story"? It had such a cute shape, too! It's filled with some equally irresistible bits of lace that I couldn't leave behind. 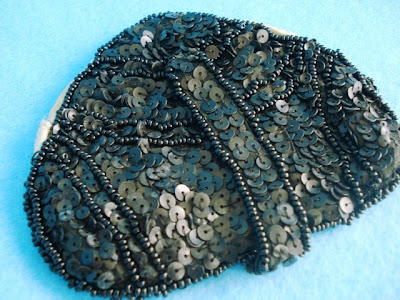 This little evening purse is tiny, designed to be held in the palm while waltzing; it was my big splurge of the trip, at $9.99!
But there's nothing more fun than going off the beaten track and exploring. One place I knew I had to go in St. Louis was a store that Paige mentioned on her blog called Country Korner. It's in O'Fallon, MO, where my husband's grandmother used to live. I stopped by the little shop and it was delightful. I mentioned to the owner, Diane, that I'd read about her store on Paige's blog, and she was so pleased! We even took a photo together, (despite both being wilted from the extreme heat and humidity we'd been having all week.) 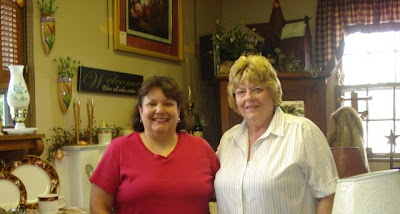 These were among the wonderful items I found in her shop: 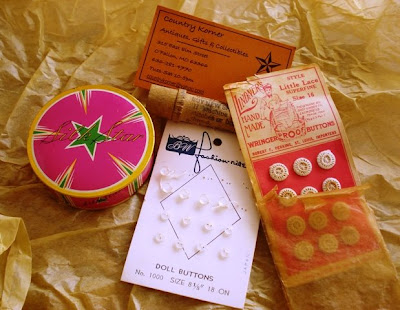 Look at the sweet little pink Silk Star ribbon tin; and a wooden needle holder, something I've never had but always wanted; the cute card of tiny white doll buttons; and the sweet card of very old knitted buttons that are "wringer proof"! 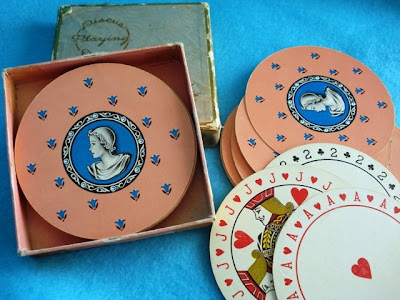 And how cute are these playing cards? My son had to check, and sure enough, they were all there (except 1 Joker)!
As we were leaving, Diane told us to be sure to check out the store up the street, which was a combination Dog Bakery and antique store! This, my mother-in-law and I decided, we had to see!

It was indeed a very cute shop full of the usual but also some quite unique objects. That's one thing I noticed about shopping in St. L -- I saw things I'd never seen before (and I, like many of you I'll wager, had felt that when it comes to antiques, I've seen it all!) I exercised great self-control, and only bought one thing there (but my MIL bought dog treats for her granddogchildren.) Here it is: 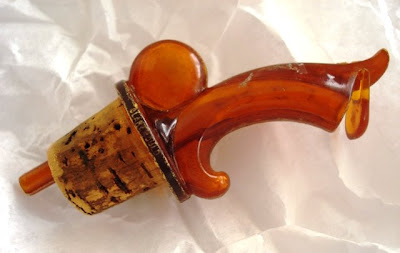 It's a liquor cork/pourer and I just fell in love with it, don't ask me why!

True to plan, I visited some thrift/second hand shops near my in-law's neighborhood and was very disappointed, especially in the Goodwills. I had good luck at a couple of charity shops in Florissant, and then on the last day I decided to take a chance on the Salvation Army in a strip mall called Grandview Plaza. Jackpot! I easily could have filled a cart -- especially with the depression glass and doilies and runners they were selling for 39, 69, and 99 cents each!

I kept bringing home little bags of odds and ends and getting "that look" from everyone at my choices, which surely seemed like junk to them...I piled the packages in the corner of my in-laws dining room instead of putting them away, because everyone kept asking to see what I bought. The funniest thing was that the kitties my in-laws rescued last Spring were insatiably curious about each and every item I brought into the house! 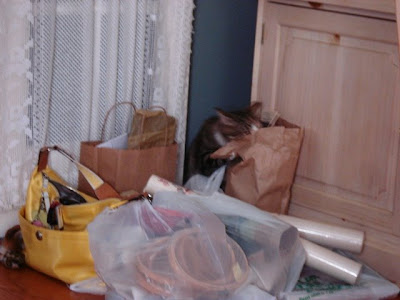 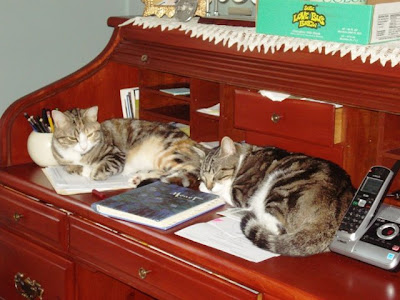 I really loved sharing the house with these two sweeties -- they're littermates of a feral cat, and my father-in-law bottle raised the one on the left, the little girl they call "Kitty." The male, called "Tom" came to them a few weeks later. The mama cat, who my in-laws caught and had spayed, still visits every day!
antique family vintage

Christine said…
wow, you found so many great things. I really like the pourer too!

Coralie Cederna Johnson said…
Beautiful curious kittens checking our all your wonderful vintage finds! What fun to travel off the beaten track and then come home to sweet purring! Perfect days!
July 2, 2009 at 5:49 AM

Melissa said…
Wonderful finds on your trip! I love those playing cards, too cool. And the kitties are so precious.
July 2, 2009 at 7:05 AM

Allidink said…
What a fun time it sounds like you had! You got some great deals! Those kitties are precious too!

Lenox Knits said…
Wow, sounds like you really scored! I love the stash from Diane's shop. She is such a sweetie and has such a great eye. I can wonder the St. Charles Antique Mall for hours. It is a very soothing place for me. I'm so glad you enjoyed my neck of the woods. Next time you come we'll have to meet up!
July 2, 2009 at 4:11 PM

2-That topper thing my folks had, and I sold in one of my antique shops.

3-My kitties always sniff into treasures found- I bet it has something to do w/where they came from having other pets, or from the thrift stores having,uhh,'guests' in the after hours(that's why I clean everything, like, 3 times!)