- November 24, 2010
Two of the classes I took at Silver Bella were with the gracious and friendly Charlotte Lyons.  First, we made a chatelaine -- a holder for sewing tools worn around the neck.  Here I am with Charlotte, and we're both wearing our chatelaines. 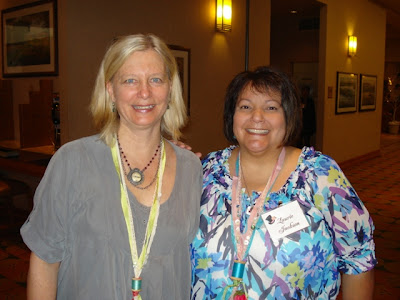 I added lace, buttons and beads to the ribbon and wool that made up the necklace. 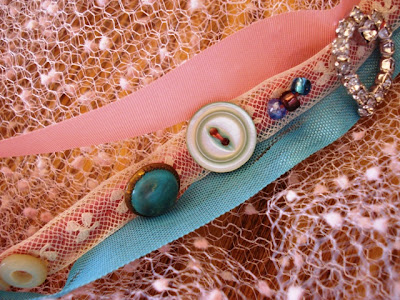 We brought spools of thread from home, and any trims we wanted to add.  I added some pink tatting which I tied to a chain of yarn I'd crocheted. 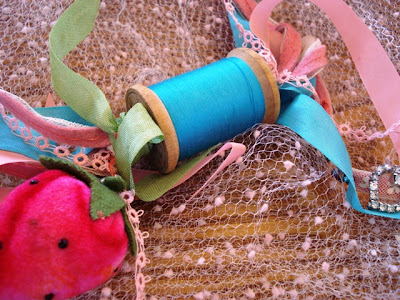 We made the tiny strawberry from some dyed velvet and wool provided by Charlotte, and added seed beads as...seeds. 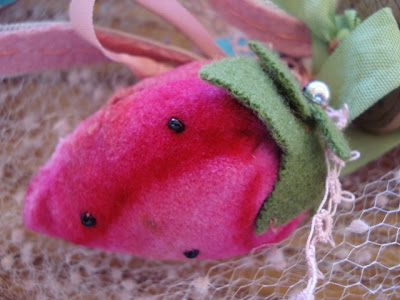 I loved the strawberry and could have made a hundred of them! 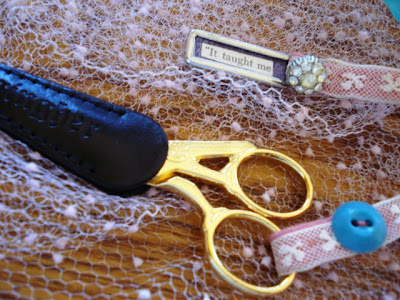 Fiskars donated a pair of Gingher bird scissors for each of us to use on our chatelaine -- I was so excited!  I used to have a pair of them, but they were accidentally thrown out about 10 years ago and I've longed for another pair ever since! 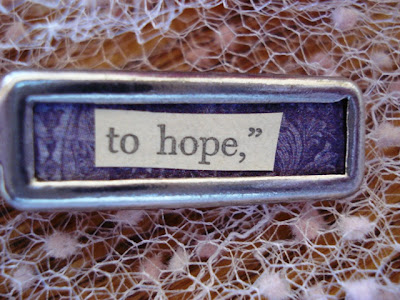 Charlotte had us bring a phrase or book quote, and I brought this one "It taught me to hope";  we inserted it into this tiny frame and attached it to our chatelaine. 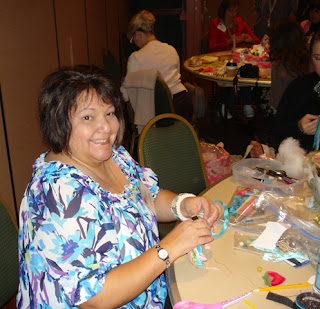 It was all so much fun!
The next class was called "Nana's Basket" and I had planned to make it a true to the name; so, I brought along photos of both of my grandmothers, and paper ephemera and trim that was meaningful with respect to them. 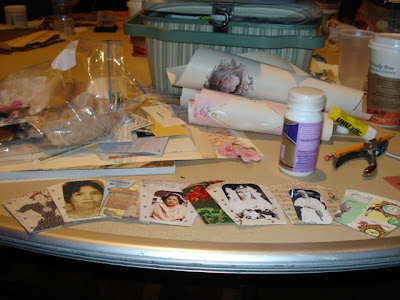 These are my finished components of the basket -- covered with papers on both sides. 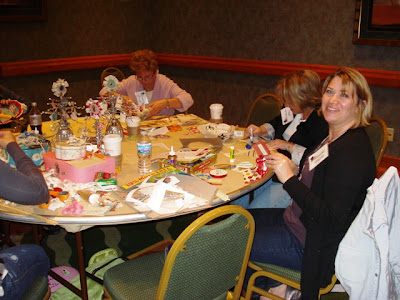 Everyone was so relaxed as we sat and played with our paper.  The gal on the far right is one of my new friends, Tamantha. I didn't finish the basket completely until I got home.  I laced it together with seam binding, alternating bows and simple ties so as not to crowd it.  Inside, I lined it with glitter on the bottom, because it was, after all, Silver Bella!  Here is a view from the top (above), and now I'll tell you about each piece: 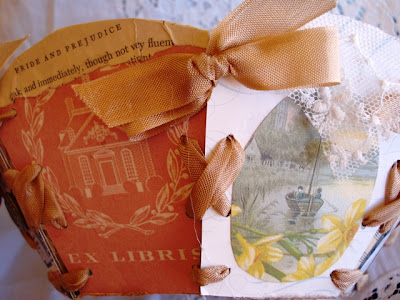 My mother always used to say her mother was the reason I was such a good reader; so, on the left, I used a book's endpaper and a scrap of my favorite book, Pride and Prejudice; the next piece is a shore scene, which reminds me of my paternal grandmother's origins on the coast of Spain. 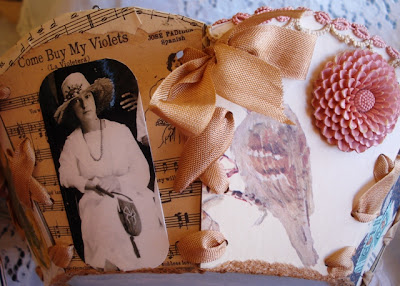 The beautiful woman in the hat is my paternal grandmother, before she was married.  I placed her photo atop a piece of sheet music from a Spanish song; the piece next to is is a scrap of wallpaper showing a pretty bird, and then a pink earring in the shape of a lavishly-petaled flower. 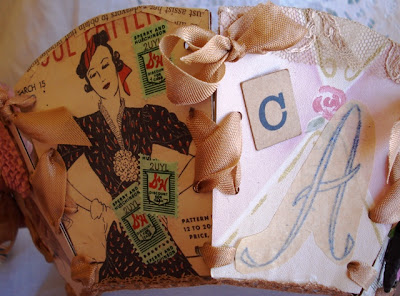 On the left, a Vogue pattern in a dress style that reminded me of my grandmas, plus some S&H stamps that they collected back in the day; next to it, a "C" and and "A" for the surnames of each of my grandmothers, mounted on old wallpaper. 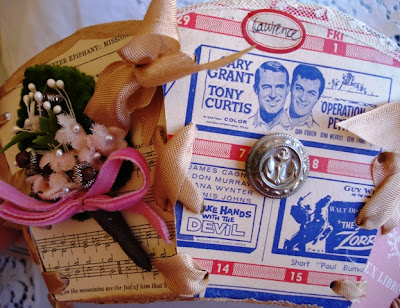 A pretty corsage atop sheet music; and then a scrap of a theatre advertisement showing "Operation Petticoat" which is a reference to my father (and uncle's) service in World War II in the Navy, plus an anchor button.  I know it couldn't have been easy to have watched two sons go off to war as my paternal grandmother did. 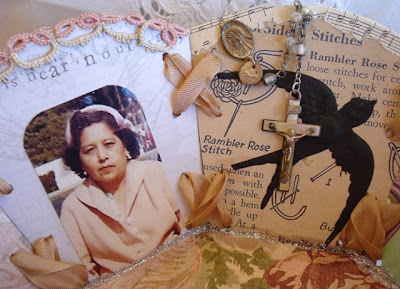 On the inside now -- the woman on the left is my maternal grandmother just the way I remember her, in a park in San Francisco wearing pink.  I used pretty scrapbook paper and pink and white tatted trim for that photo; next to it, a page from Workbasket magazine showing different embroidery stitches -- because it was she who taught me to sew and embroider.  Over it is a swallow, and a piece from one of her rosaries (it was already broken.) 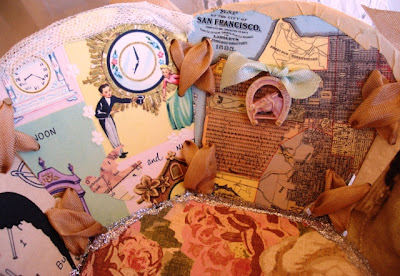 The piece with the clocks is a reference to my paternal grandfather, who collected them; grandma had a houseful of clocks!  Next to it, a map of San Francisco, where both grandmothers raised their families.  The little horse charm is a reminder of how my paternal grandmother loved seeing horse races (as my father did.) 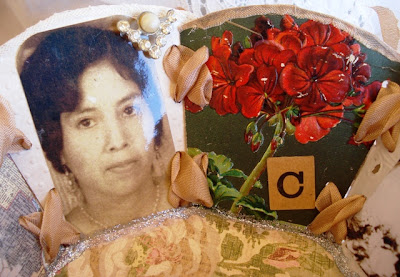 The woman on the left is my maternal grandmother; the photo was taken when she had been married about 4 years.  Grandma would be 100 this year, had she lived!  The bling in the shape of a "V" reminds me that she had four sons go Vietnam, and one who remained stateside because she insisted.  She was fortunate that all four returned, too.  Next to it is a an antique postcard with a geranium the same color as ones my paternal grandmother had in her yard, and we in ours, and the "C" is both grandmother's initial: Caroline (above left) and Concepcion. 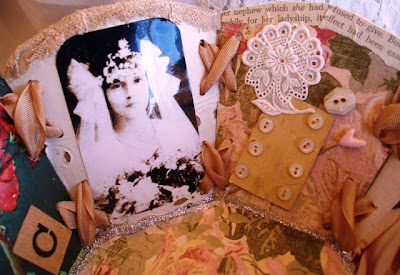 Another photo on the left of Concepcion; this time at her wedding.  Next to it, a piece that reminds me of Caroline, who as I've said taught me to sew, with mother of pearl buttons, a pin, and a tiny piece of antique lace.

If you've stuck with me this far, thank you!  I enjoyed these two classes so very much -- they were so different, but each fulfilling in its own way.
Silver Bella

Angela said…
You create such amazing things! I absolutely love the basket and loved reading about each side! What a family treasure! Thanks for sharing! And Happy Thanksgiving!
November 25, 2010 at 5:43 AM

charlotte said…
They are both so beautiful! I love all the thoughtful choices you made with each addition- each adds so much to the loveliness, Laurie! Happy thanksgiving to you.
November 25, 2010 at 6:09 AM

Connie said…
Read through the whole thing even though you already told me it in person. I LOVE memories like this worked into art. It is right down my alley. Can't wait until I'm ready to do my memory quilt.
November 25, 2010 at 6:21 AM

Anonymous said…
I think I've worn and used my chatelaine every day since I got back from Silver Bella! And I really appreciate how you've made your basket so meaningful.
November 25, 2010 at 4:02 PM

Christine said…
What a gorgeous piece. I love how you incorporated so many memories into this basket!!!
November 25, 2010 at 10:55 PM

Tammy said…
Hey, you have a picture of me! Thanks for posting it. I just finished my basket, but it's not nearly as fabulously embellished as yours! It does inspire me to maybe add some things in the future.
November 30, 2010 at 8:06 PM