We interrupt this life to bring you a fire

- June 13, 2013
Colorado Springs is burning again.  This time, closer even to home.  As you know, I started a new job on Monday and I was so concentrated on that, and being a good little employee who didn't surf the Internet or check her cell phone, that I had no access to news at all on Tuesday when the fire broke out.  On the drive home, I checked my cell phone and found a message from Rebecca asking if she could evacuate to our house.  Then I rounded a turn and saw this: 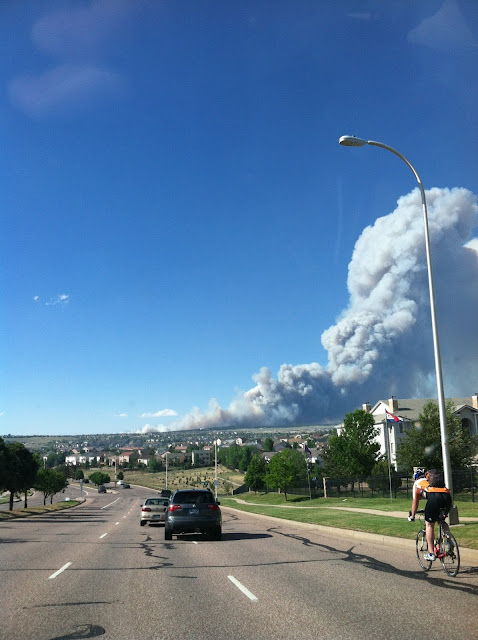 The fire started in Black Forest, where Rebecca lives, and which is close to us.  I took this photo closer to home; this is a main road to my neighborhood; at this point, ~5 pm, the fire was still about 10 miles away: 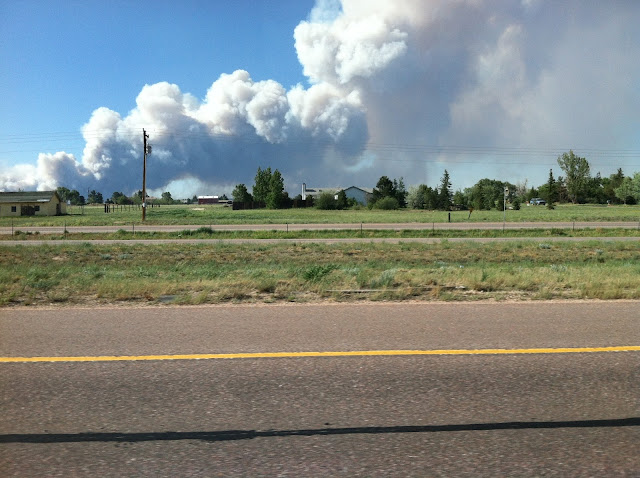 So there we were, with Rebecca's family and their friends/neighbors, plus all the pets--six dogs and two cats-- and we were all glued to the news on TV and trying not to freak out completely.  Especially when my neighborhood was later put on pre-evacuation standby, too! 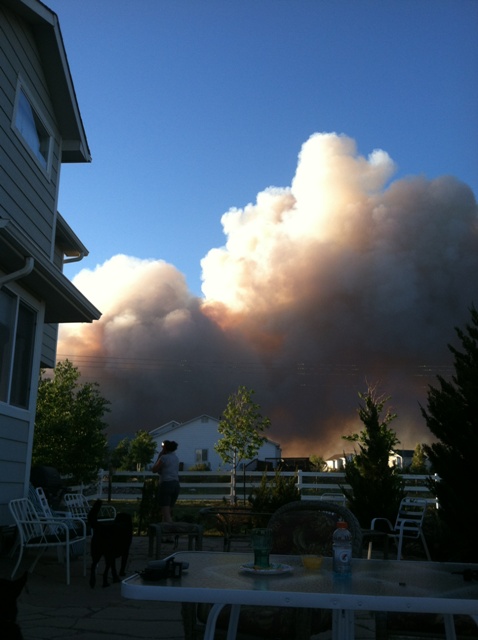 The photo above was about an hour before we all decided we needed to leave. The fire was fast moving and so close we could see flames from our backyard.  By the time we were readying to leave, about 10:45 pm, the smoke was so thick INSIDE our house that our eyes were burning/watering. 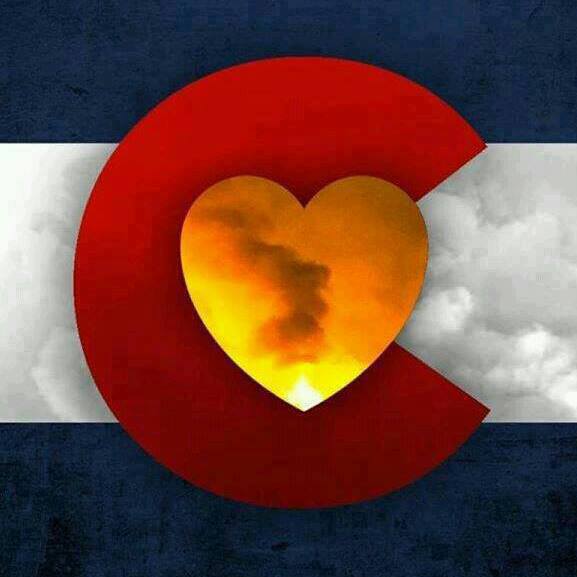 So, late Tuesday night Rebecca's family and their friends moved to a hotel.  Because they live in Black Forest, they knew it would be days before it would be safe enough to get home.  That's just how it is with forest fires.  Dennis and I and our two doggies left at the same time and went to stay with our friend Jeanelle's family in town.  THANK YOU SO MUCH JEANELLE! 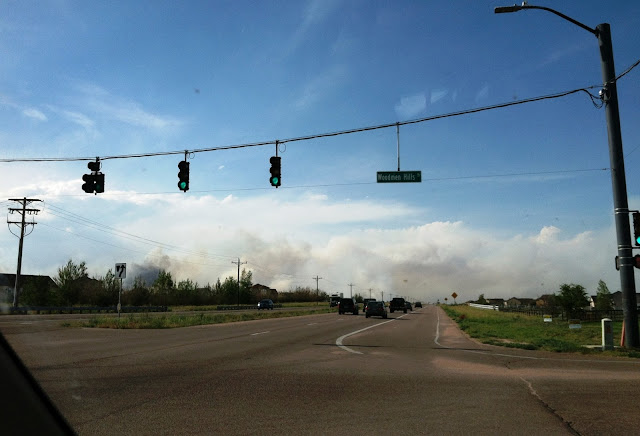 The next morning I was back at work, and Dennis took the dogs home. The photo above is from the corner near my house around 5:30 pm on Wednesday.  Far less smoke, and further from us.  Did I mention that while we were OFF pre-evacuation and back in our house Wednesday, Jeanelle's neighborhood was ON pre-evacuation?
Meanwhile...
My son is working as a camp counselor at a nearby Scout camp, which had to be evacuated yesterday.  As I write this, I await Ben's return home.  He is on camp staff, so he had to stay at the evacuation site (a Fairgrounds) until the 800 Scouts from all over the country either left to go back home, or were transferred to the care of the American Red Cross.  Do you know how glad I will be to see him?
And then today we were saddened to learn that Rebecca's friends who were with us the first night, lost their home. Everything. They got out just in time.
But Rebecca's home is safe, for the time being.  Although they still can't go back.
I don't know about Jeanelle's home, as the fire is moving closer to them; they, though are safely further away, staying with some of their other friends.
Thank God for our friends.  And our firefighters.  And all emergency personnel.
When things are a little more back to normal I will post all about last weekend's fun, and the new job, ETC.  Thank you everyone for your concern and well wishes!
family friends

Maggie said…
wow, so scary. Thinking about you, your friends, and those who are so affected by the fire. What a nightmare. Take care and stay safe.

Kelli Davidson said…
Thank goodness you are okay! I was worried. As soon as I heard the news - and because I know Colorado very well I knew your home was close to the danger area. Those fire jumpers are the BEST! My daughter lived across the road from them when she lived on the Mesa working for the BIA. They work HARD! I'm sorry your friend's friends lost their home but glad their lives were saved!
June 14, 2013 at 3:28 AM

Marrianna said…
Thank God you are okay. I appreciate you taking the time to write a blog post and send pictures to all of us. I knew/know about the fires in Colorado and have been holding prayer thoughts for everybody affected. Quite a few years ago, I was driving through CO with a friend and we stopped in some smaller ski resort after a huge fire and the thank you posters and banners to the fantastic hot shots were everywhere. Those fire jumpers/hot shots are courageous and tireless.

Take care during this time and I look forward to reading more about the job and your fun weekend recently.
June 14, 2013 at 6:46 AM

Oh Laurie
how terrible for everyone involved in this fire

That was to close for comfort
I have a niece who lives out there and so far they are OK, anyway no fires close

my friends were coming home from a cross country drive vacation and was planning on seeing the Black Forest on their way through Colorado a couple days ago , and of course had to scratch that

so sorry about all the house that are gone, wouldn't that be a terrible thing to face in life?

Unknown said…
After last year I'd think Colorado had paid their dues with the fire thing. I too have been so absorbed in what I'm doing I don't think I've watched t.v. in days and yesterday we had an almost tornado here - when I came home and finally decided to watch the news and saw the fire in Colorado I instantly thought of you. Keep us posted - glad you are o.k. ;)
June 14, 2013 at 10:08 AM