You may have known her as Bunty, Vintage Bunty, Bunty Barmcakes, or simply Barbara.  Perhaps you saw her work on the pages of Somerset magazines, swapped with her, or took an online class with her.  However you knew her, or whatever you called her, she was an Artist, Blogger, Button Floozie...and Friend.
I first "met" Barbara online when she visited my blog during a large blogging event called One World, One Heart in 2010.  The name of the event was prophetic, as it put me in touch a member of my "tribe" that lived all the way across the pond in Oxford, England.  She responded to the first comment I left on her blog with these words:

I wanted to say thank you for leaving such a nice comment and  I hope we will get to know each other through the blog world.

And so we did.  Barbara and I loved so many of the same things: buttons, lace, mixed media art, vintage fabrics...and creating.  Her blog is still up for the time being, so you can see first hand some of the beautiful works she created.
In addition to working with fabric, textiles, and paper, she was a gifted photographer.  I always looked forward to the beautiful photos she would post whenever she and her husband, Paul, took weekend jaunts or day trips to the beautiful countryside where she lived.
She also took the time to create digital media and she sold it on Etsy.

Then, with the help of her husband, she opened up her own shop online -- different from her Etsy shop!  How many of us are feisty enough to do that?  Well, Barbara was.
Once, when I showed some button shopping finds on my blog Barbara commented on how lucky I was to have such bounty to discover, and lament that they didn't in her neck of the woods.  So I went to town making her a package and sending it off.  Here's what it looked like: 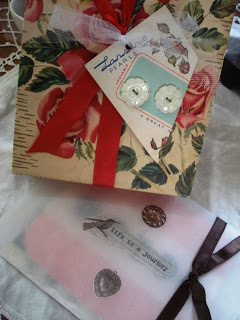 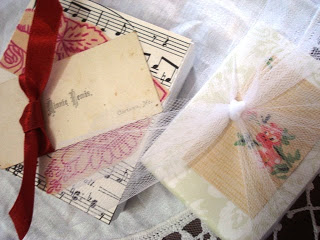 Barbara's joy at receiving it is one of my happiest bloggy memories.

Barbara and I gushed to each other in emails about wanting to become Button Floozies authors, and then shortly after we got to know each other a few spots opened up!  So, we began our time at this blog together; here is her first Button Floozies post.

We exchanged gift surprises over the years; here is what she sent me one of those times. 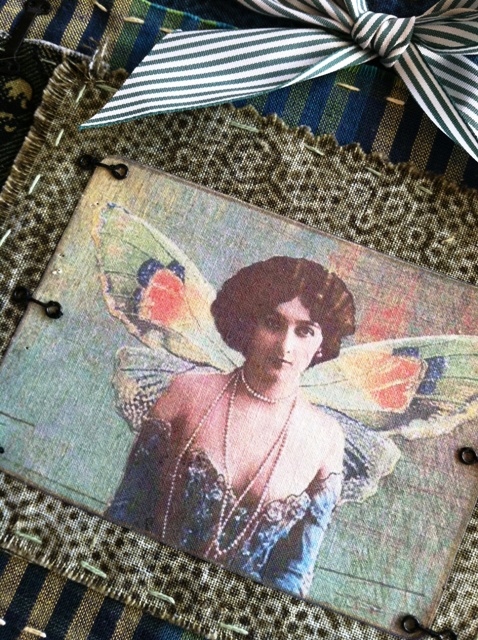 I've always cherished it; so much more, though, now. 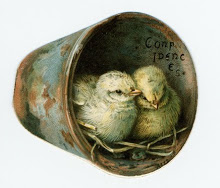 She began a battle with ovarian cancer 21 months ago, and it was to that heinous disease that we lost her.
I realize now that I never saw a photo of Barbara "in real life" -- she was modest that way.  But I have a picture of her that comes to mind when I think of her.  It looks something like this... 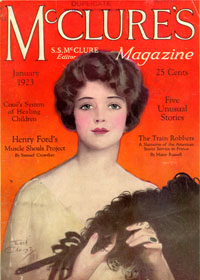 I'll miss her.  When I think of her now, I will see her whipping up something beautiful from moonbeams and the silver linings of clouds, all dotted with choice, carved mother of pearl buttons.  Farewell, dear Barbara!

Linda @ A La Carte said…
I didn't know Barbara but she sounds like such an incredible person. I am so sorry for your loss, but your tribute to her shares how much she meant to you!
hugs,
Linda
February 10, 2013 at 11:15 AM

JoAnne said…
I'm so sorry Laurie. I know how close we can become as blog friends. This is a very sad day in the blogisphere. I read a little earlier on another blog that Les (Harmony Road Studios), a lovely and talented person who I enjoyed swapping matchboxes with also passed away.
February 10, 2013 at 12:20 PM

kathyinozarks said…
a beautiful tribute to your special friend. so sorry for your loss-hugs
February 10, 2013 at 1:50 PM

Jann said…
My goodness--I didn't know--so very sorry to hear this--she gave joy to so many people through her lovely blog and her generous nature!
February 10, 2013 at 2:53 PM

Sami said…
I'm so sorry for the loss of your beautiful friend. You have written a most wonderful tribute to her.
February 10, 2013 at 4:19 PM

Maggie said…
A very beautiful tribute, Laurie, to someone so dear to you. Thank you for sharing your heart in this lovely post.
February 10, 2013 at 11:28 PM

Marrianna said…
What a beautiful tribute to your dear friend. So sorry for your loss. I love the photo she took of the countryside where she lived. Beautiful.
February 11, 2013 at 7:21 AM

Betsy@My Salvaged Treasures said…
What a beautiful tribute to a very talented artist and friend; I'm so sorry to hear about Barbara's passing. Her creations and photography are so inspiring. Thank you for sharing Laurie.
February 11, 2013 at 7:47 AM

Kathy said…
Laurie, this is a beautiful tribute. I did not have the pleasure of knowing Barbara and it is clear that I missed someone special. May she rest in peace.
February 11, 2013 at 12:56 PM

Patty said…
What a special friend you made in blogland. She was very talented indeed and I can see shy you loved her so much!
February 12, 2013 at 7:51 AM

Lynn Stevens said…
I'm so sorry to hear of the loss of your dear friend. Hold those special memories in your heart.
What a lovely tribute.
hugs Lynn
February 17, 2013 at 10:09 AM

Tammy said…
What a lovely tribute and so special to have made a friendship with someone across the pond. I'm so sorry for your loss--hugs!!
February 21, 2013 at 6:35 PM

Diane in NH said…
I was searching for more informatioin on dyeing fabric with avacado peels and found Barbara's Blog. I knew right away I wanted to follow her. Then sadly I read she had passed away. How fortunate were you to have had time with such a creative lovely person. She will be missed by those who knew her and those like me, who wished I'd known her.
February 28, 2013 at 3:56 PM

Lynn Holland said…
Almost a year on and I have just seen Paul's news of Barbara. It is so so sad.
I have the great honour of owning two pieces of Barbara's work and they now feel even more special.