Christmas in July and other thrifting adventures

I'm doing a lot less thrift shopping these days.  But less is not NONE.  Even after a full day of listing other people's junque, I still find treasure-hunting for myself so relaxing.  Here's a run down of what I've picked up in the last three weeks: 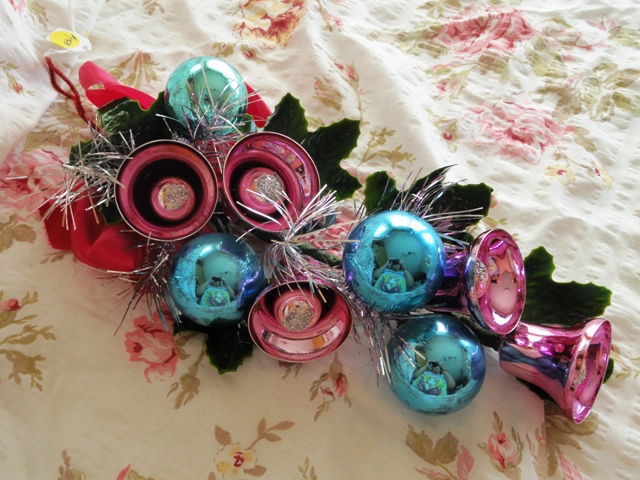 At one estate sale recently it was Christmas in July; even though I didn't get there until the last day of the sale, there were still some kitschy holiday pieces to snap up, like this aqua and pink swag... 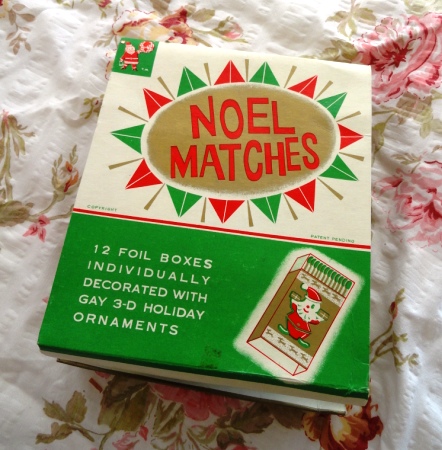 and this awesome box of holiday matchboxes. 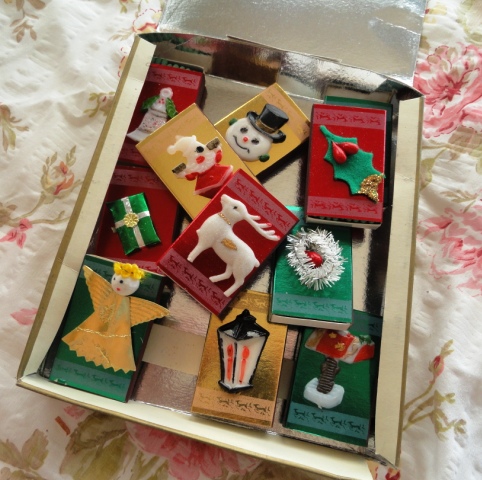 I don't think I've ever found them un-used like this before; so I never knew the matches would be... 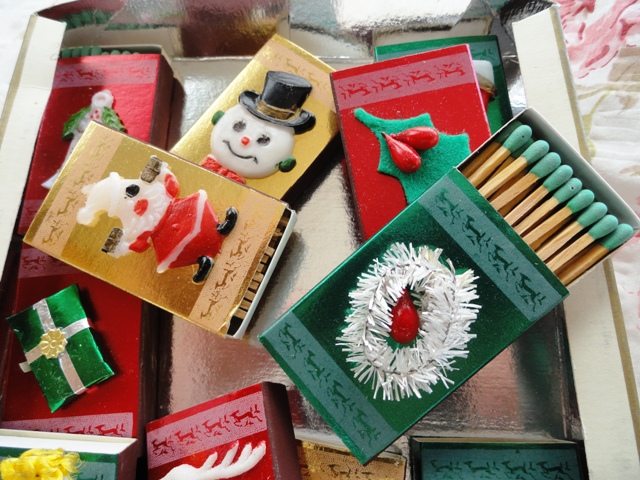 green!  I love them. 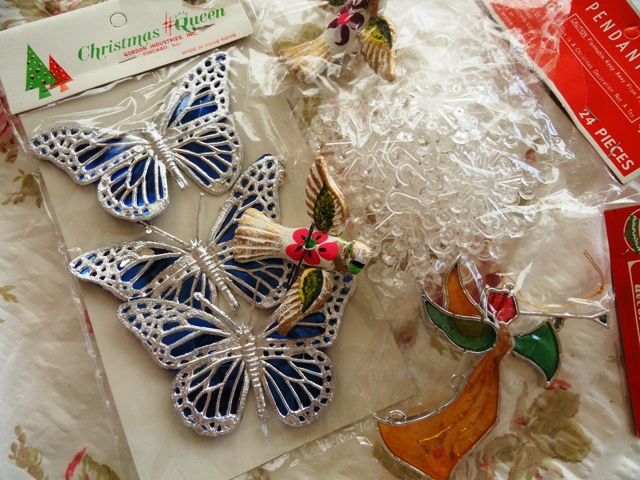 The matchboxes came in a plastic bag stuffed with these other items...all of which I can do without.  You know how that is. 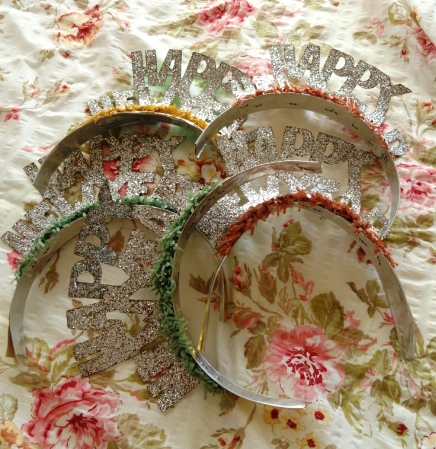 At the same sale, these FABULOUS New Year's Eve hats, with sparkly letters in real metal glitter (I say this because it's turning so nicely) and look at that faded crepe paper on the bands! 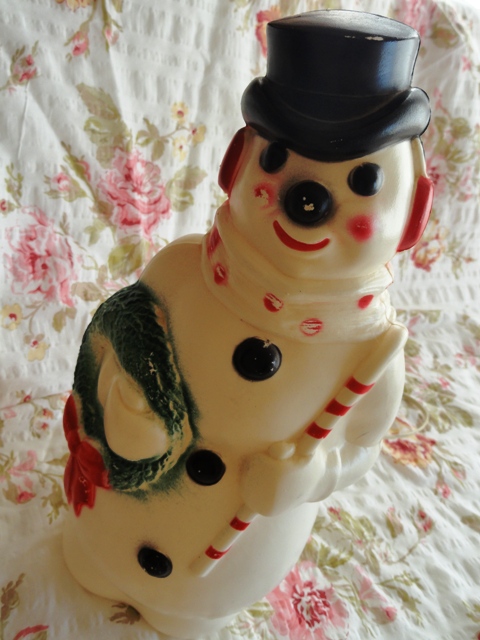 At another sale, this light up snowman had to come home with me because he was just 50 cents.  I think he's a very cute example of his genre. 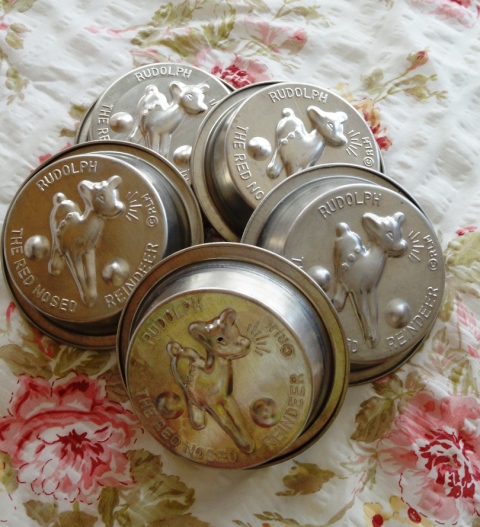 And these little Rudolph tins (they're the size of a large muffin) were so much fun! 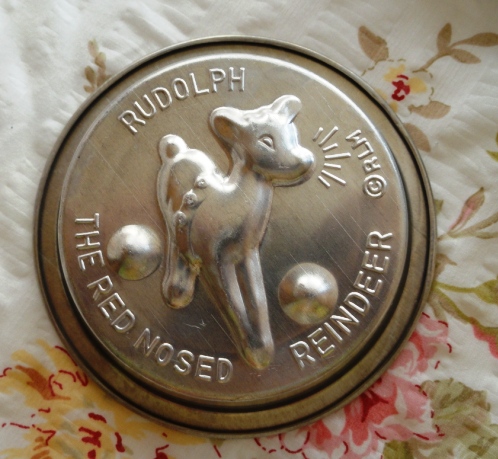 I think they would look wonderful foufed up for the holidays.  Or maybe just as small vessels for other goodies. 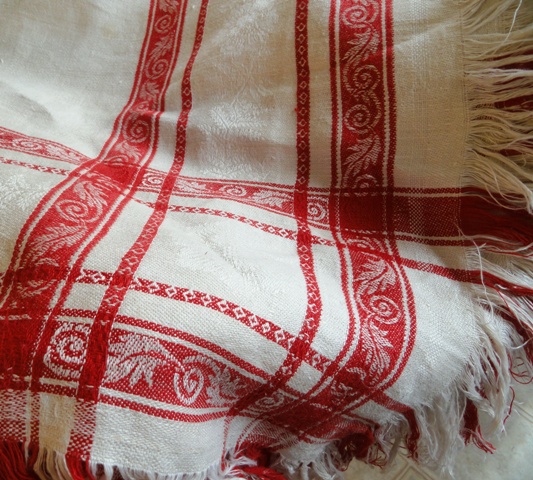 At a thrift store I just couldn't walk away from this beautiful woven table cover. 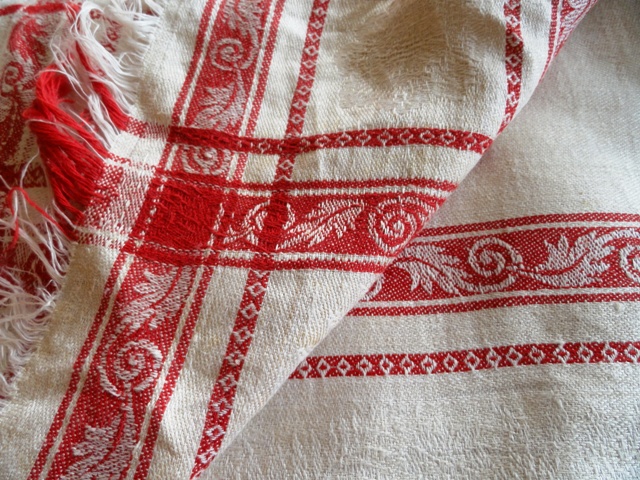 It's probably the last thing I needed, but I thought it was so cheerful. 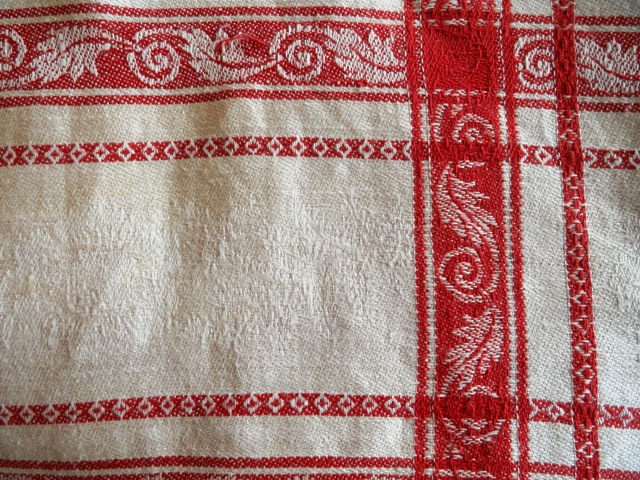 I don't know if you can see it, but it has a woven pattern in the white cotton... 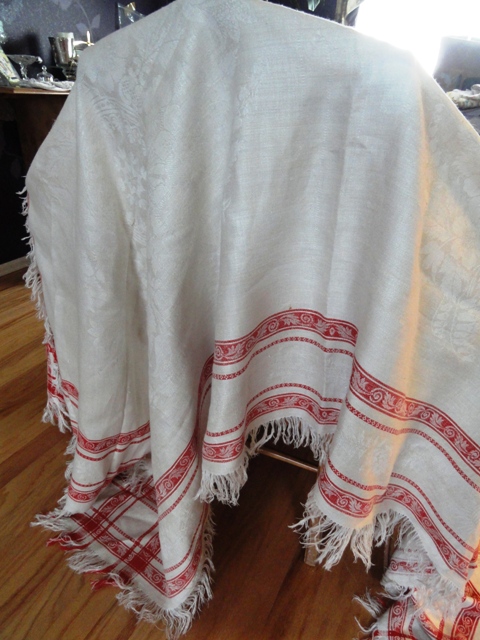 and was intact, without a single hole.  Best of all, it smelled like old paper.  I'm not sure how to explain it -- but some linens do and this one does...and I love that smell. 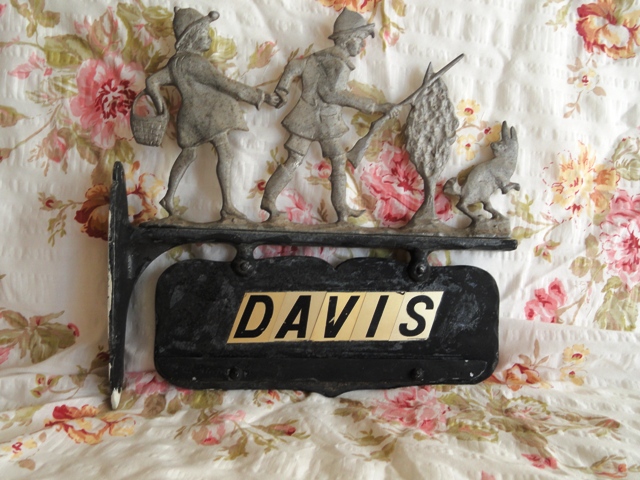 At a different estate sale, I fell in love with this little house nameplate. 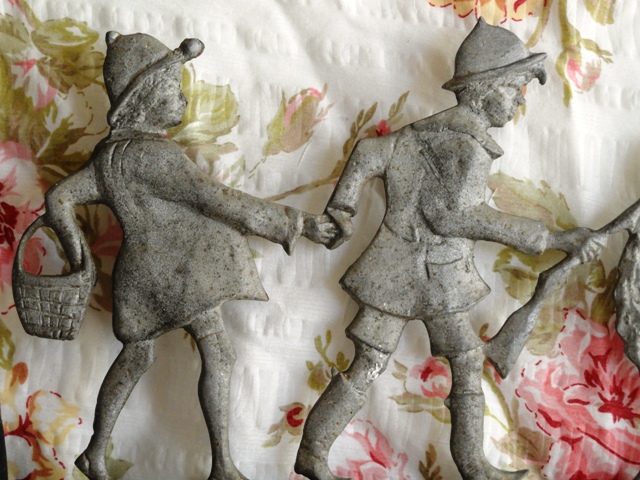 It was old, and had such nice wear that I didn't even mind that it portrayed a gun in the picture.  I actually thought it was very A.A. Milne in flavor. 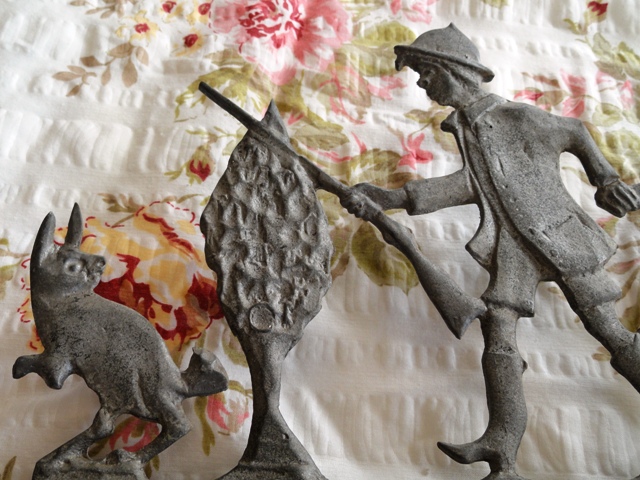 And the rabbit doesn't look too frightened, does he?  I didn't think so.  I prefer to think he's leading his friends on a make believe hunt in the woods.  All I have to do is take off the name Davis and replace it with my own. 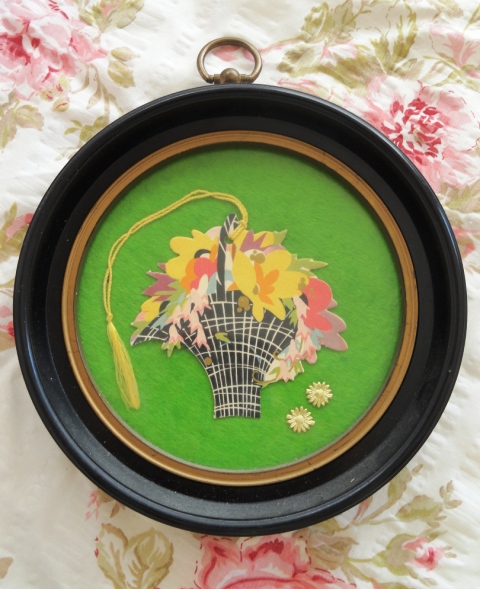 I found this framed tally card so charming; next to it are two Dresden foil flowers.  But best of all, there's a note attached to the back explaining that the tally came from someone's relative's party on such-and-such a date -- so it was in fact a thoughtful heirloom. 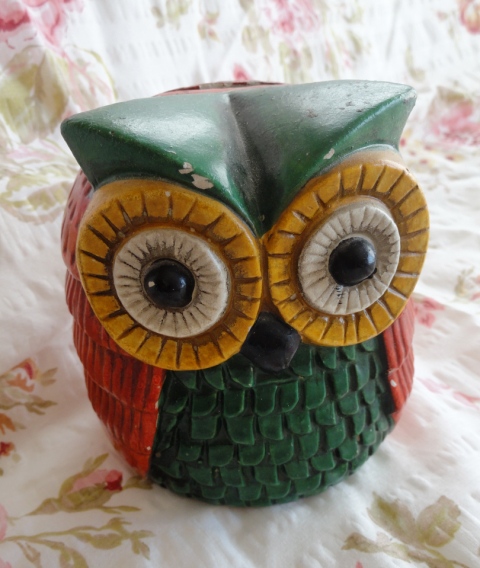 I should have left this owl behind since I'm not re-selling anymore, but he jumped in my cart when I wasn't looking. 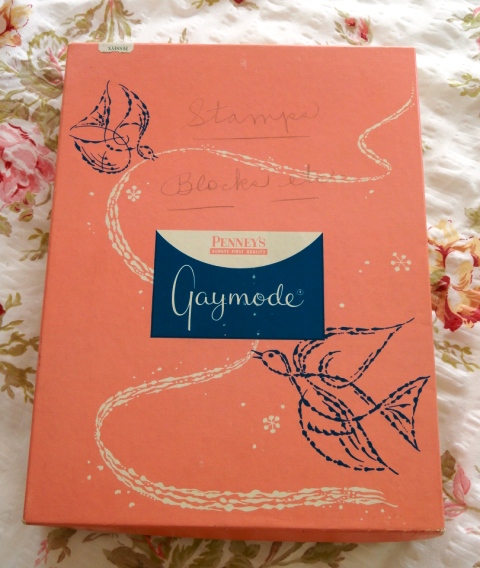 I think it will be easy to erase the writing on the front of this cute box -- and even if I can't easily do that I loved the birds so I had to get it. 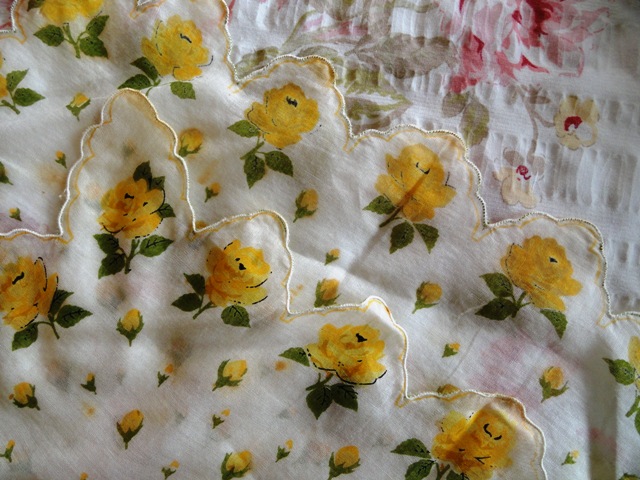 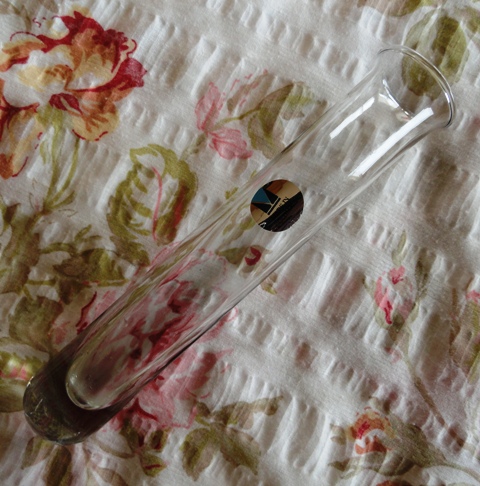 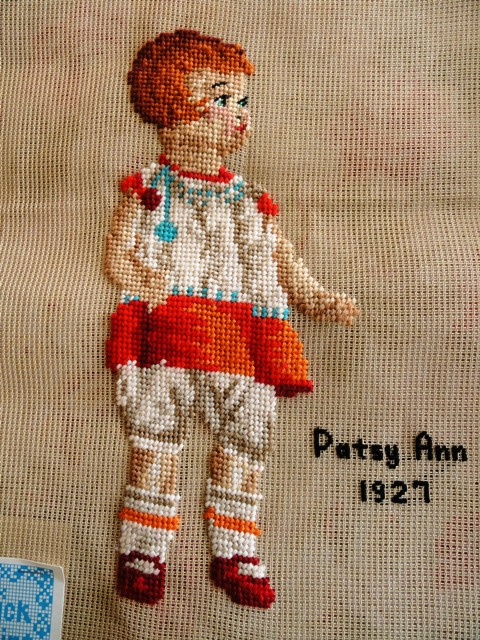 and these really cute needlepoint motifs were waiting for me at the thrift store yesterday. 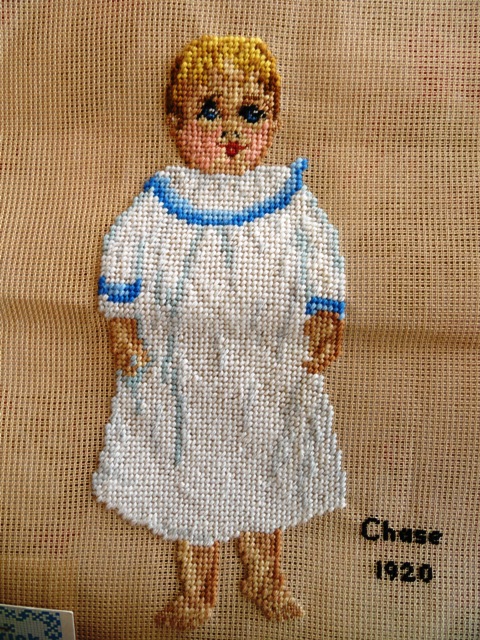 I don't know if they are someone's relatives, or if they're dolls, or even actors...? 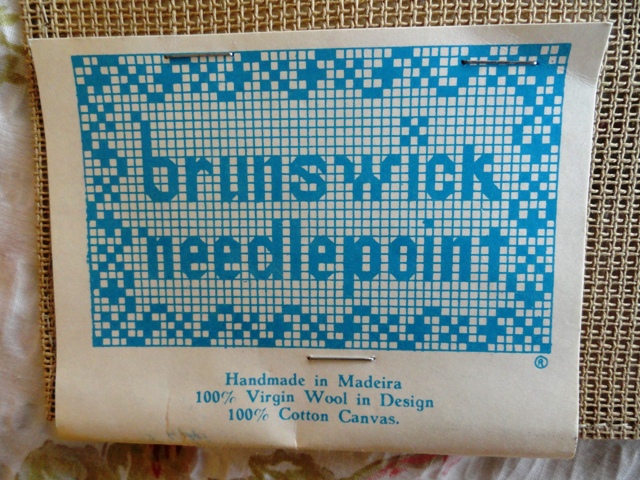 They still had their tags stapled on and they were too nice to leave behind.  I did, however, leave some other really wonderful bargains behind.  Since I'm working for shopgoodwill.com, I'm not selling vintage for myself anymore, boo hoo.  So, if you're local, you know what that means: more for you!
holidays thrift store finds vintage glass ornaments

Sami said…
Some lovely finds. If you lived in Australia you could celebrate Christmas in July for real!!
July 8, 2013 at 3:17 AM

JoJo said…
I loooooove the vintage Christmas stuff esp. that first pic of the bells/balls!!! And the matches are awesome too!
July 8, 2013 at 7:25 AM

Abby / Linda said…
didn't realize that you are working now. some job for you! Listing antiques on line! WOW! are you suited for that! Too bad about your own selling--is that due a conflict of interests?
July 8, 2013 at 11:03 AM

Unknown said…
very nice...I have never seen matches like that! The name plate is so cool! Maybe you can fit your own name onto it instead?
July 8, 2013 at 5:29 PM

Betsy@My Salvaged Treasures said…
Wow, look at all these goodies! You were in the right place at the right time to find all those Christmas treasures in July. I really would have bought everything. I'd love to have you share your goodies at our Christmas in July link party starting next Monday:-)
July 8, 2013 at 7:35 PM

Something Special said…
Well Laurie, I am just about as jealous as I could get with all these fantastic finds. Looks like you have been doing lots of thrifting to me. I love all the Christmas items you found. I have my studio and home back to myself, and have helped my children move to different states, so I am busy crafting away down here in Southern Nevada. It has been so hot, not much thrifting, going on here. hugs to you
July 9, 2013 at 1:01 AM

Kathy said…
I know you can't sell online but do they object if you sell local, like at a show a couple of times a year? Another blog friend recently tried to "retire" and closed her antique mall space but realized it is SO hard to stop picking so she is doing a show now and then to turn over that stuff she can't resist.
July 10, 2013 at 9:34 AM

karen hess jewelry said…
I hate thinking of Christmas when we're just in July, but i LOVE all the treasures you've shared!! At least thinking about December cools off my body a little!
xoxo
July 11, 2013 at 12:02 PM