Skip to main content
- April 05, 2013
In honor of the Colorado State Button Show and Sale taking place in Denver this weekend -- April 6 and 7 -- I'm re-running this article from when I attended the 2010 show.  I hope you enjoy it!

On the first day (Saturday) that the Colorado State Button Show is open to the public, they hold workshops on different aspects of button collecting.  I attended one, which was about the different kinds of shanks you find in glass buttons.  (The shank is the piece with the hole that you sew to the fabric; two holed buttons that lay on the fabric directly without a shank are called "sew throughs".)  If you can identify the button's shank it helps to date the older buttons.  It was a very interesting talk, given by the sister of a member of the Colorado State club who had traveled from Minnesota to speak and attend the show.  She knew everything. 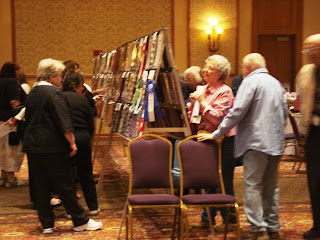 When you're not attending the workshops, you get to go and view all the trays that were entered and judged in thecompetition. 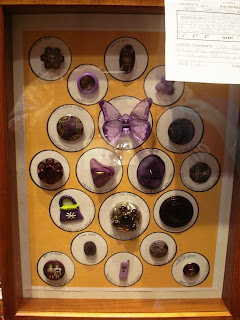 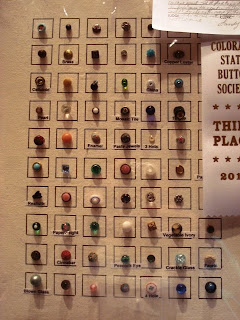 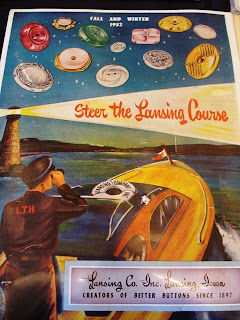 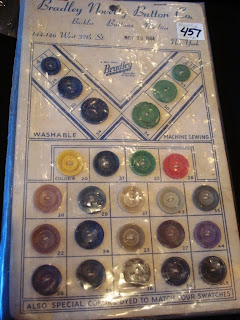 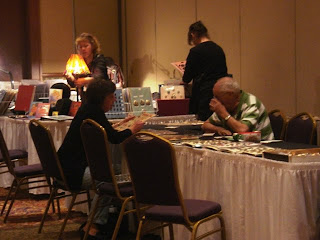 But the highlight was THE SHOPPING!  There were many vendors, each with stacks and stacks of those button trays, all for sale!  In most cases, you could buy the whole tray or just individual buttons off of them.  It was another fantastic way to learn about button composition, style, age, etc., as the buttons trays are arranged in groups like "celluloid", "horn", "colored glass", "ivoroid", etc.  The vendors are very knowledgeable about their buttons and many have traveled from out-of-state to be there; I found they were happy to tell you all about individual buttons! Prices generally started at $2 per button and went on up, with most of the nice examples being in the $12-15 range.  I saw some spectacular buttons priced in the hundreds of dollars, each.  We were all in button heaven!Okay, here is my latest love -- the button I splurged on as my special purchase at the show: 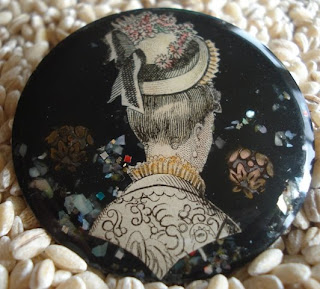 This is a large button, at 1.5" diameter.  It's made by an artist named Theodore Gates and is, in its own way, a collage.  He's taken a cutout of a Godey fashion drawing and applied it to a watch crystal, inside.  He then filled in the rest of the button with a tarry composition material.  It's signed and dated by the artist, made in 1967.  I just love this button.  At $20, it's the most I've ever paid for a single button, by far.I was not a big spender, but many of the serious collectors were working on filling in their collections with the high quality, rare, and beautiful buttons the vendors brought to tempt them!Here was another large (for me) purchase: a full card of 70 tiny, colored mother of pearl buttons.  Everyone was "oohing" and "ahhing" over the clever way the collector displayed them.  I know how time consuming it is to put buttons on a board, so I was very impressed! 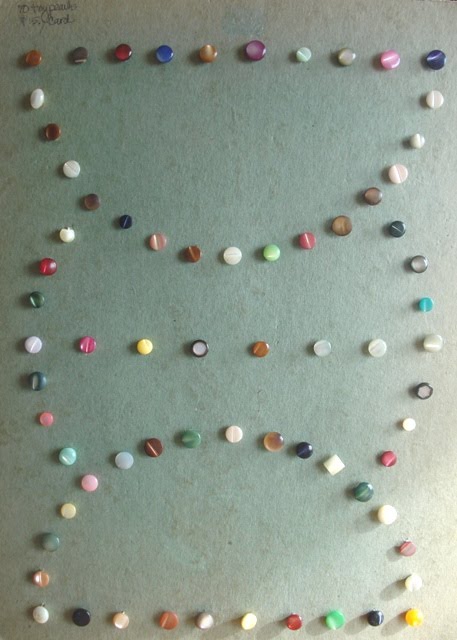 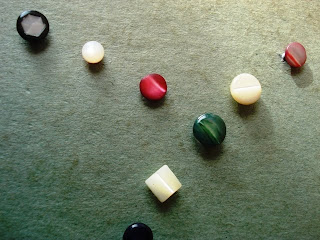 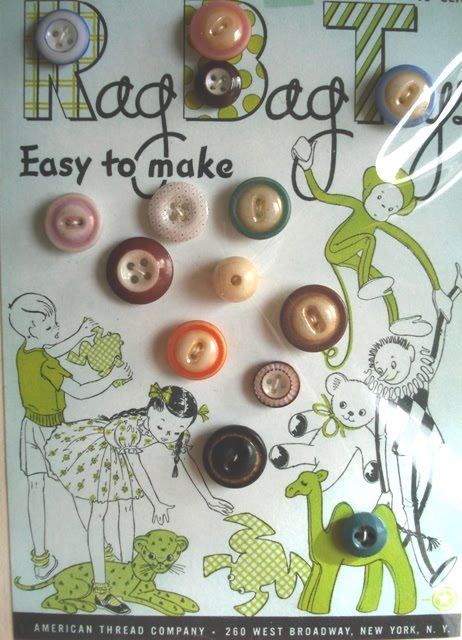 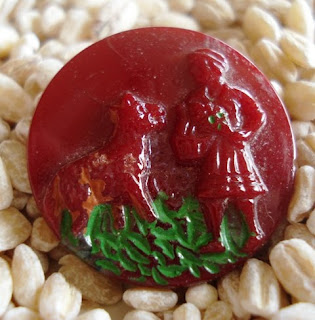 This is a red glass "storybook" button, depicting Little Red Riding Hood.The rest of the my purchases were from what are called "poke boxes."  This is when dealers put buttons that are not of high enough value to put onto trays (in most cases) or that have small imperfections into a big box with a price, 25 cents to $1, usually, and we sit around and sort through them.  The poke boxes are the most fun and the most popular at the sale, needless to say! 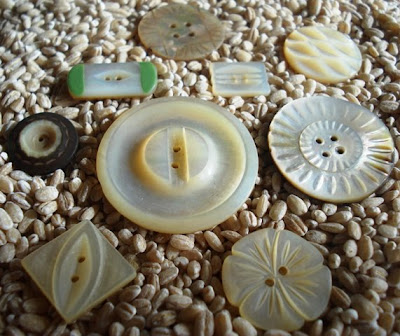 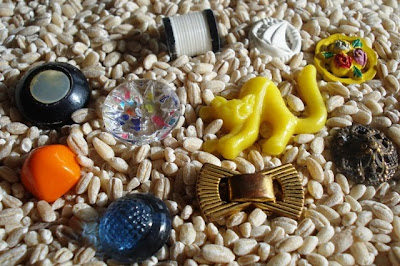 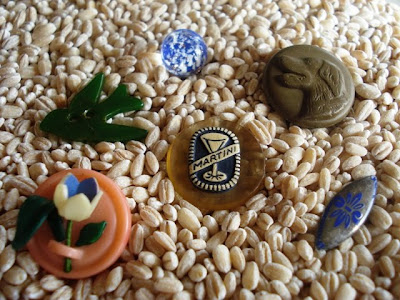 The buttons above were from the most popular poke box in the room: even though it was also the highest price (at $3 each!) the buttons that vendor had were superior in every way.  It took me all day to get a spot huddled around that poke box, and I had to push my way in.  Not that the ladies looking were unfriendly at all -- on the contrary, they welcomed me to squeeze right in!  We had so. much. fun. poking through that box full of buttons together.  One of the more experienced button collectors who was poking along would find a button and gasp, then she'd show us all what was so special about it.  It was probably the most educational of all the hours I spent at the show, and I owe her a debt of gratitude!The little swallow is Bakelite, and the blue paperweight button is my very first -- I've been wanting one!  The experienced collectors assured us newbies we would never find those quality buttons at that price again. I could have bought hundreds (literally), and many were, but I had reign myself in! 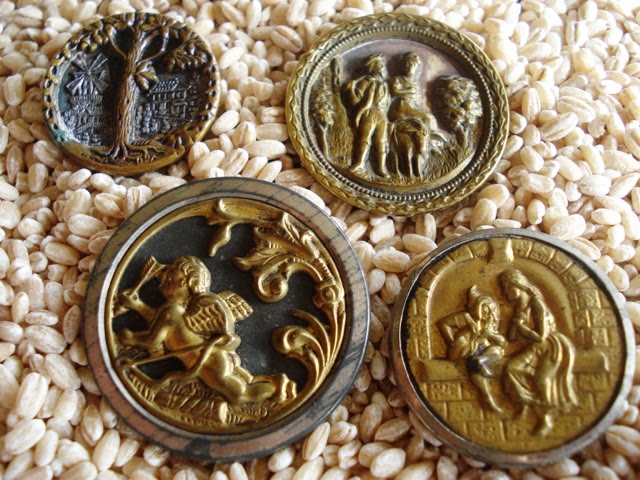 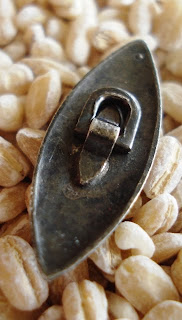 See how the little shank is movable?  I just love that!
best of buttons

Thistle Cove Farm said…
The mother of pearl buttons are beautiful and what a hoot! Never knew there was a button convention, cool.
April 5, 2013 at 6:14 PM

Marrianna said…
Love all the buttons. And here you are at the 2013 button show in Denver getting more buttons. Lucky you. This is also a reminder to me that I have glass buttons and some other interesting buttons that I cold put on a button card and sell on Etsy. I really need to look closer at what I have for Etsy. Right now, I'm making the final products for my upcoming art sale on May 4. I'll post more pictures on my blog soon.

Oh how I would have loved to be there

Betsy@My Salvaged Treasures said…
I would go crazy at a button show, can't believe I've never been to one. There's just so much to know and this is a great way to lear. You did good with your splurges.
April 6, 2013 at 7:15 PM

karlascottage.typepad.com said…
I think your special splurge purchase was a great choice. How pretty!
April 7, 2013 at 8:06 AM

karen hess jewelry said…
Loved it the first time and loved it again! Why do I never tire of looking at buttons? From the time I was little, going through my mom's button box till now...
Thanks for sharing this again, Laurie..have a beautiful week.
xoxo
Karen
April 7, 2013 at 2:42 PM

Valerie-Jael said…
Thanks for visiting me over at Tag Tuesday! Love your buttons, what a gorgeous collection. I love looking for nice ones at flea markets here in Germany, Valerie
April 8, 2013 at 8:16 AM