Dashing through the snow

- December 30, 2013
We took a Christmas trip to Steamboat Springs, Colorado.
It sure was Christmas-y! 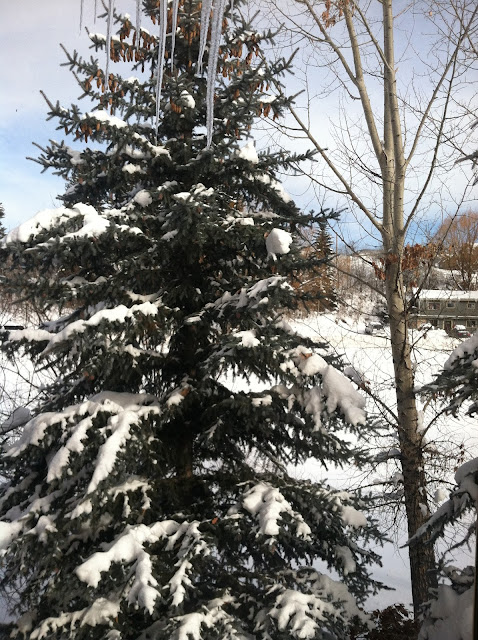 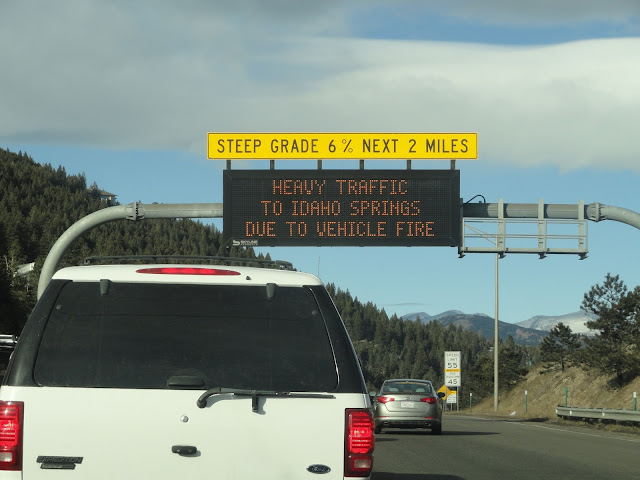 I took a photo of this highway sign, since it's one of my husbands' company's own and he worked on this one. 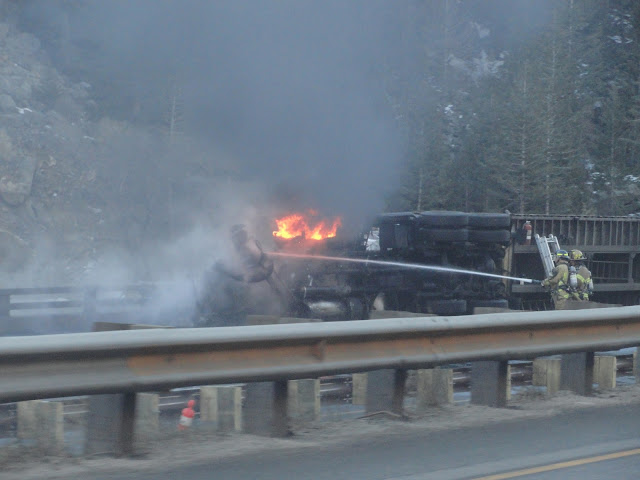 Several miles and a huge back-up later, I took this photo of the vehicle fire as we passed it.  What a traffic nightmare -- not for us, but for those poor people stuck behind it going in the other direction. I was grateful for the sign so we knew what was going on.  (It was a large truck fire that took a long time to put out.) 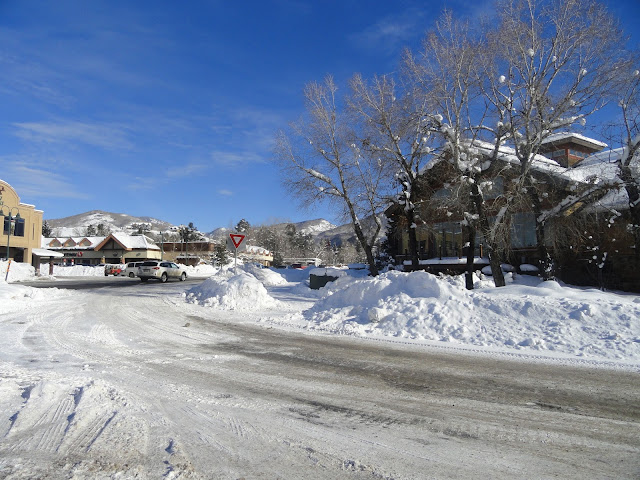 And even more grateful that we arrived safely. 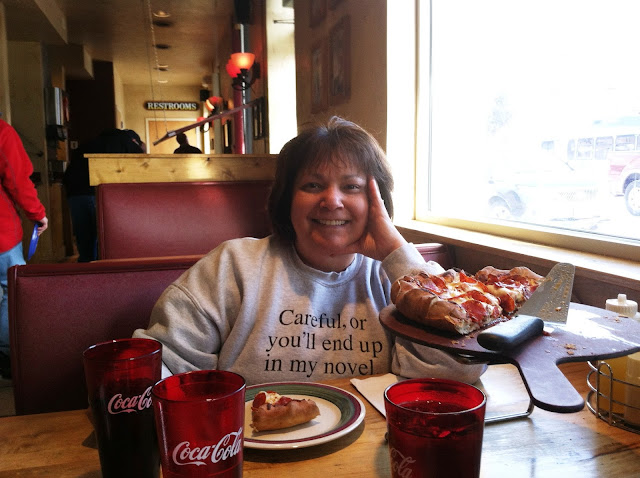 The first thing on our to-do list was lunch! 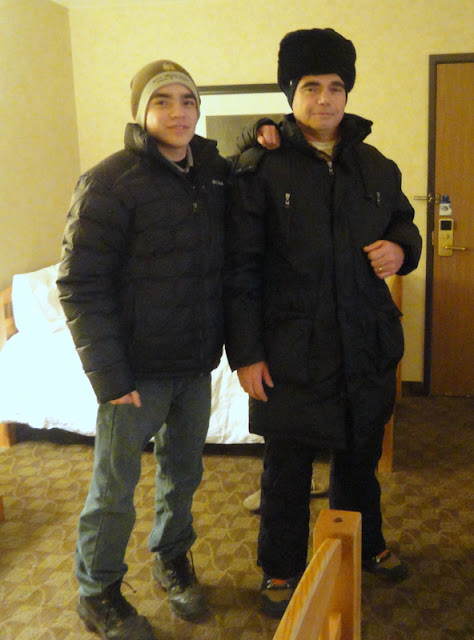 Later, we bundled up for a sleigh ride in the snow. 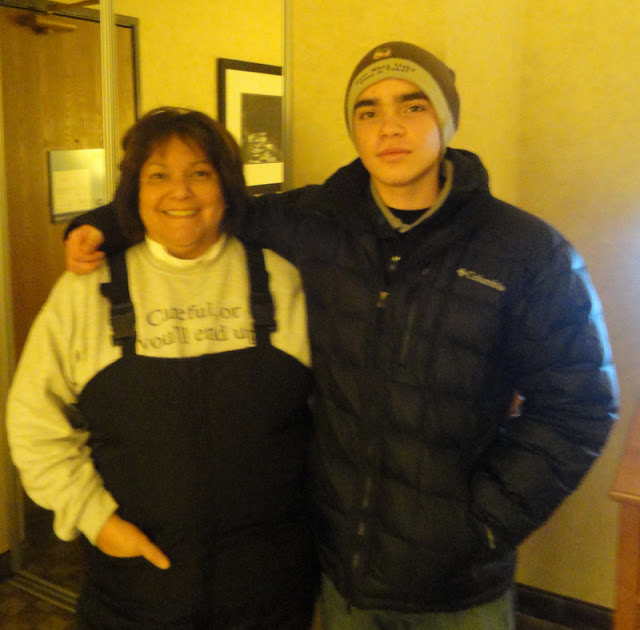 Dare I mention the sleigh ride took place after sundown, when the weather dropped below zero? 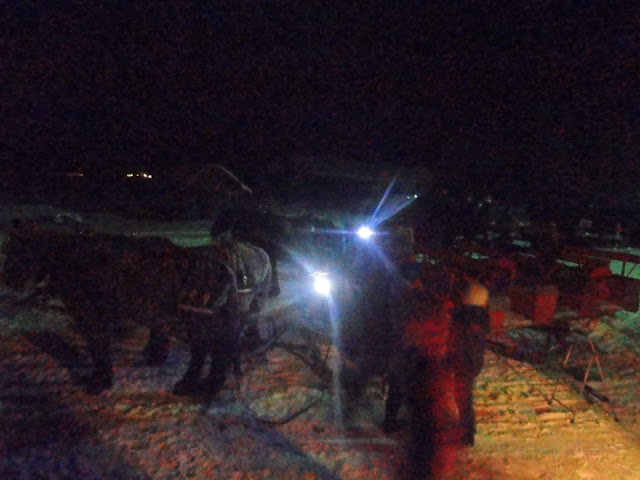 My camera didn't do great in the dark; but it was a lovely ride; we were snuggled up under wool blankets... 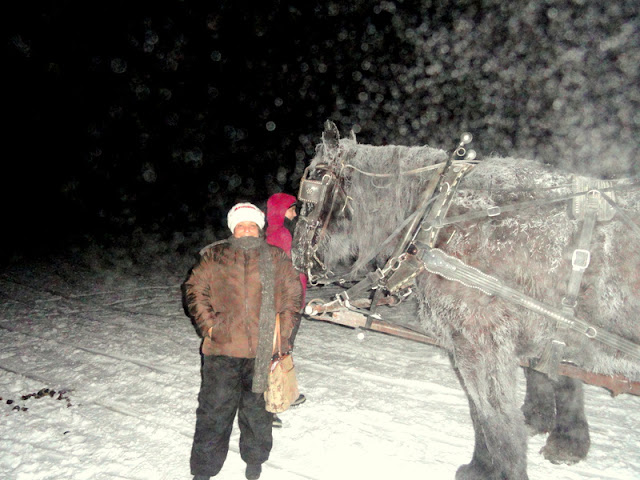 and their horses, Percherons, pulled us to a lodge for a steak dinner!
And they had sleigh bells on!  Which was one of my fondest wishes, fulfilled! 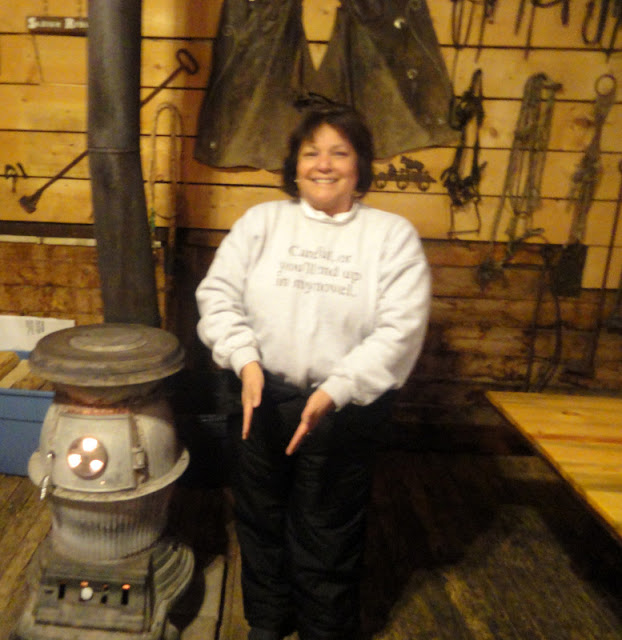 I was so happy to see the warm stove that awaited us at the lodge! 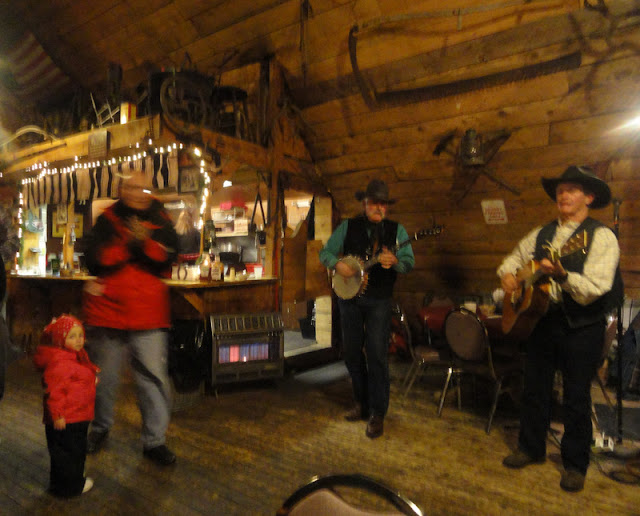 We enjoyed our dinner and all the entertainment -- not just from the band but also from the other, littlest guests who really got into it with clapping and stomping and tiny hips-a-swaying! 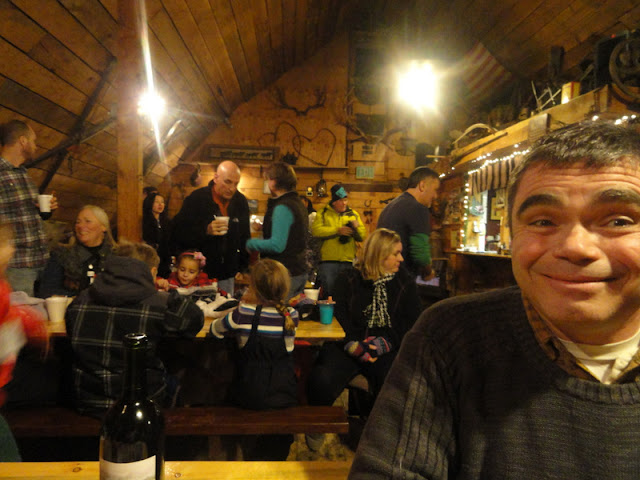 We had a great time.
The next day included a visit to a tubing hill -- out in the middle of nowhere and quite an icy trip, too! 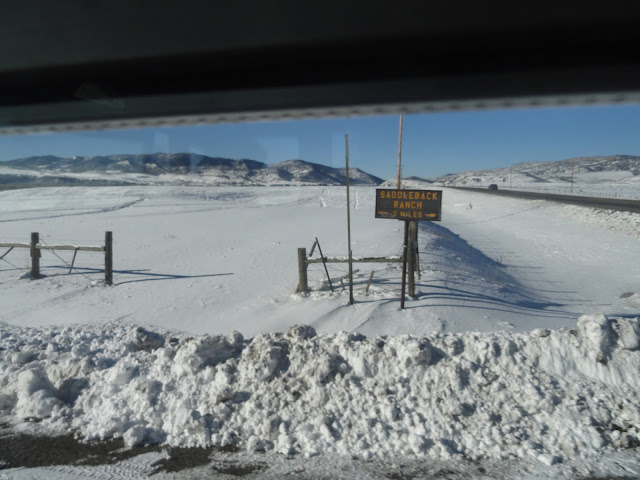 My favorite part was the ride up the tube lift before each downhill run. 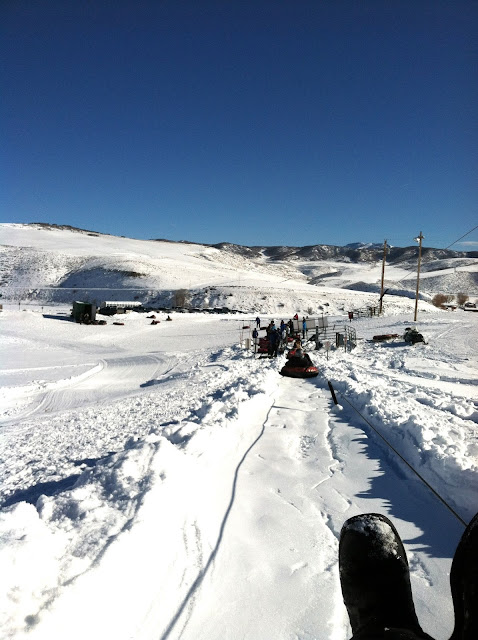 (View from the lift -- my feet at right) 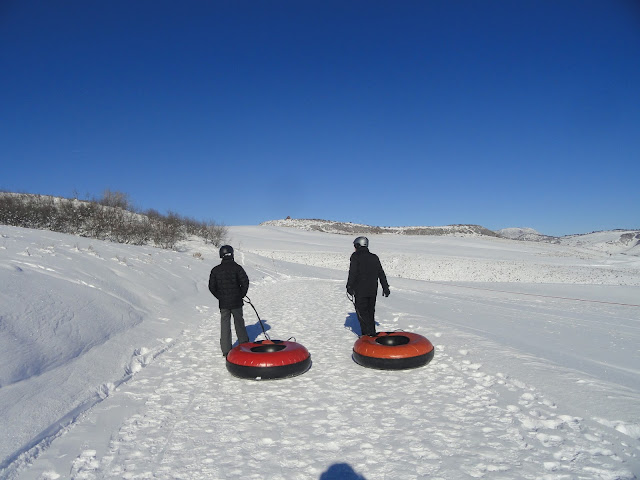 Oh my goodness, we had a blast!
The snow was up to our knees, but the runs were perfectly packed. 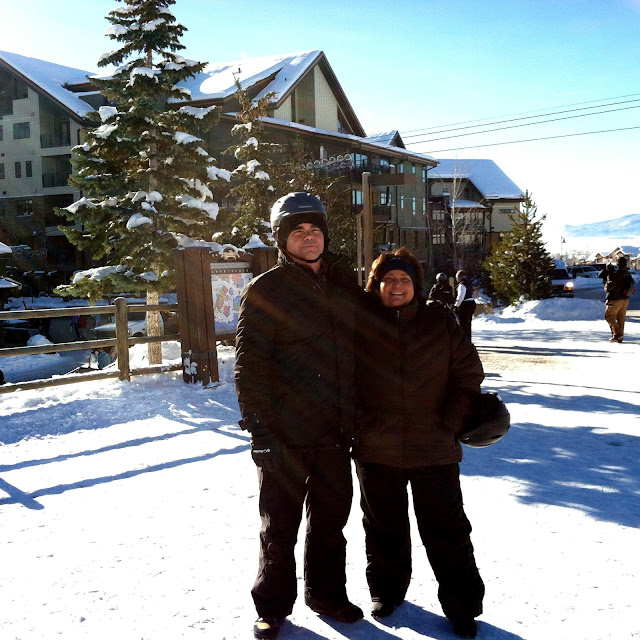 The sleigh ride and the tubing hill were both family-owned and staffed by a few generations of each family.  Both families lived and worked on their respective land, all together; an old-fashioned way of life that sounded charming.
Later, back in town, we rode the gondola up the BIG mountain. 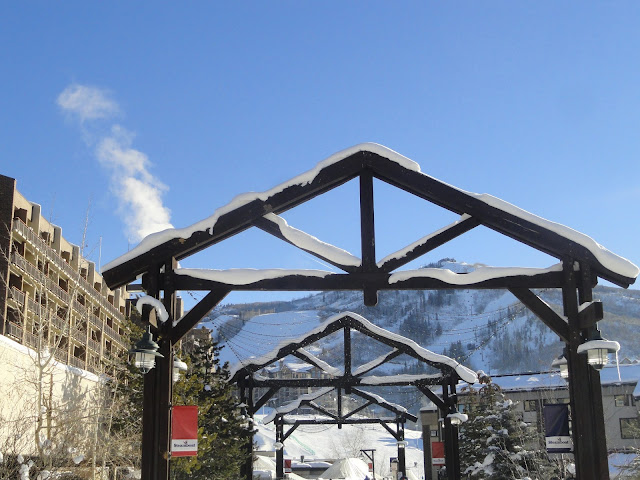 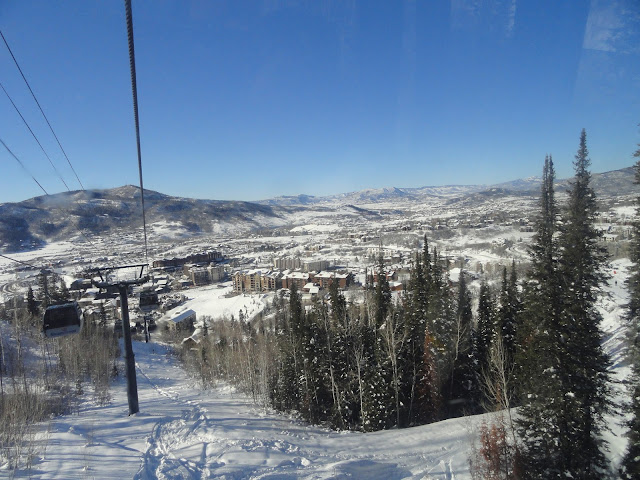 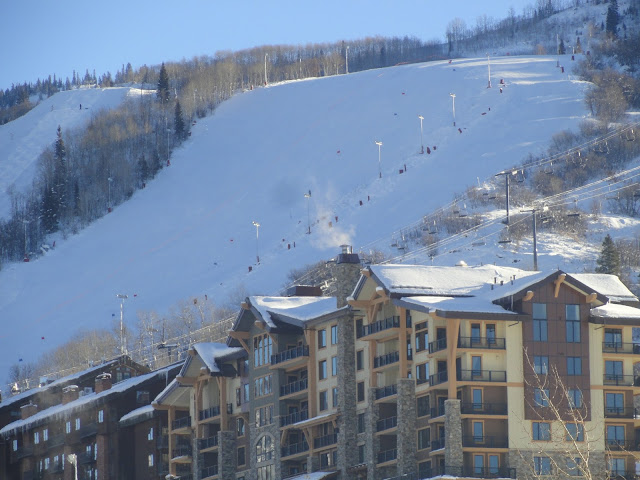 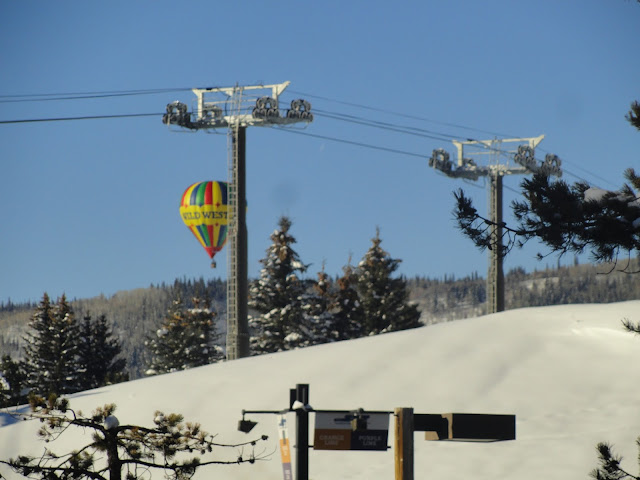 We enjoyed the views.  It's such a pretty town -- and sort of like a Disneyland for skiers! 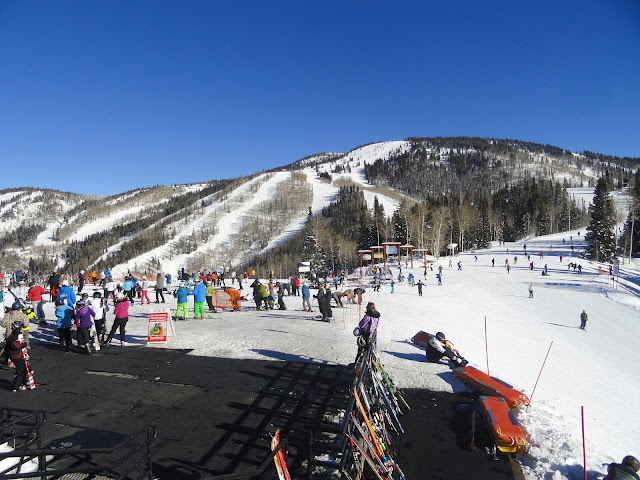 It's a strange experience to be in "Ski Disneyland" when you don't ski.  Dennis and Ben do, but didn't want to the day we were there.  So we spent time on the mountain people-watching which was mostly watching out: dodging sharp objects, being careful not to slip on all the ice...and marveling at all people go through for some time on the mountain. 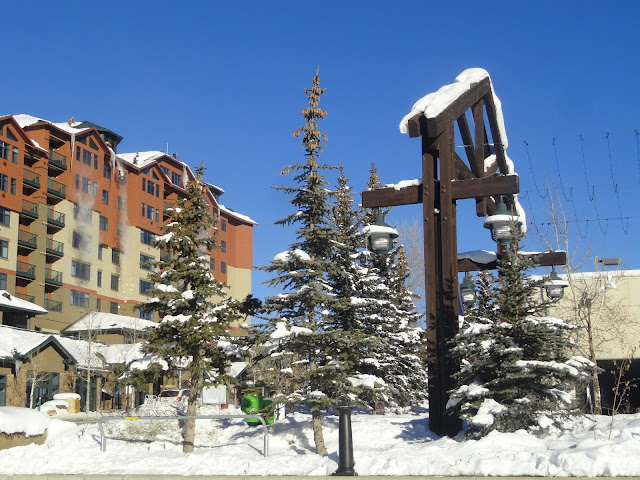 While waiting for a shuttle, I snapped these photos of the crew shoveling snow off the roof of the Grand Hotel. 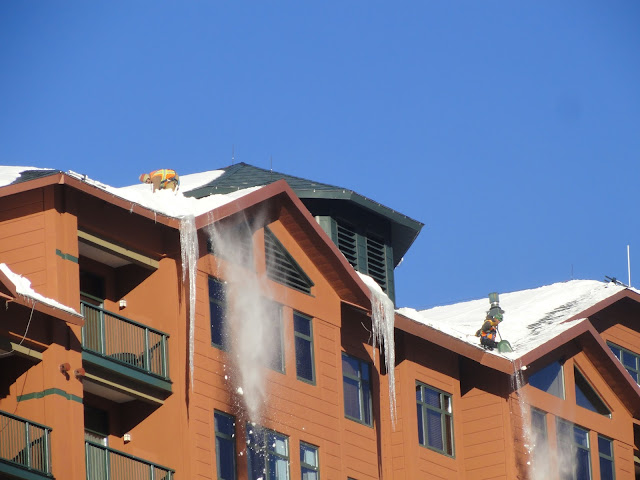 Look at those icicles!
I'm glad for places like Steamboat Springs that put a lot of people to work; to maintain a mountain like this for so many visitors definitely takes a village!
And Steamboat Springs is about as pretty as they get.

Tammy said…
What a fun trip! Colorado is beautiful anytime of year, but especially in winter!
December 30, 2013 at 4:01 PM

Kathy said…
What a fun post and what a lovely way to spend the holiday with your best guys!
You said your DH worked on that sign. What does he do?
Love your sweatshirt and I will be careful. 8+)
December 30, 2013 at 6:38 PM

Betsy@My Salvaged Treasures said…
Looks like you had such a fun time with your family. Brr, I can feel the cold, but it's gorgeous and so cozy. Love your shirt:-)
December 31, 2013 at 8:38 AM

Abby / Linda said…
So jealous! Although I don'[t ski anymore, some of my fondest memories were in the lodge after a ski race or day in the snow. (hubby and son used to race in cross country racing.) Looks like you had a great trip!
January 1, 2014 at 3:28 PM

Curtains in My Tree said…
What a wonderful trip
did you dance when the music was playing ? it all looked so fun
January 2, 2014 at 9:45 AM